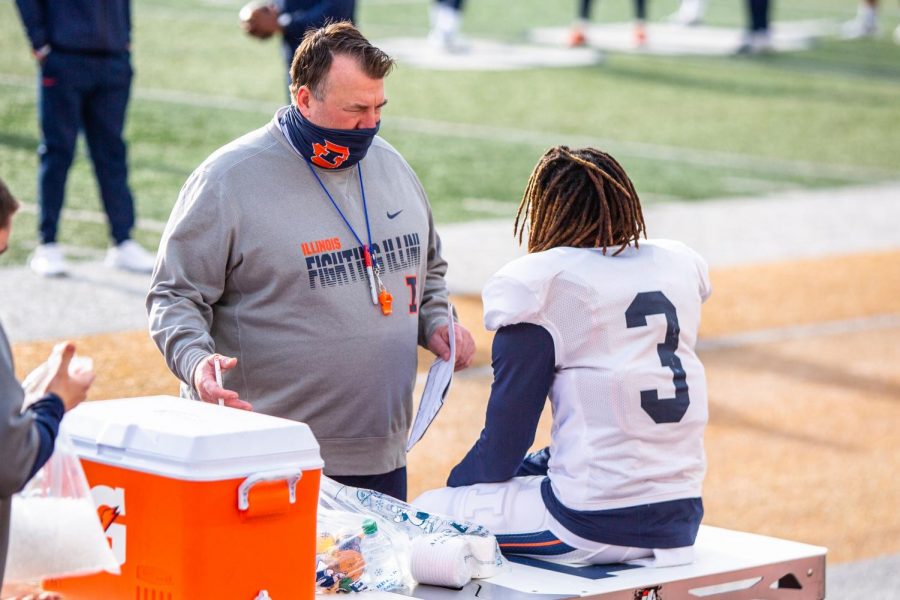 Defensive back Marquez Beason talks to new head coach Bret Bielema on the sidelines during practice Tuesday morning. Five Illini players are looking to have a breakout spring campaign, including Beason.

The Illinois football team has officially completed week one of spring football and is just three weeks away from the Orange and Blue spring game. While players are still adjusting to head coach Bret Bielema’s style of practice and the new schemes, position coaches like George McDonald and Bart Miller have already seen positive adjustments and a desire to keep learning.

While expectations are low for Bielema’s first season, he isn’t inheriting a disastrous roster, as many players have several years of collegiate experience. If used right, the Illini could still be competitive this year. To do so, however, several guys will need to start making big strides immediately. Here are five Illini who need to make some noise this spring.

Lovie Smith wasn’t always the best recruiter, but one of his top successes was bringing in Beason, a four-star defensive back out of Texas. Beason hasn’t panned out quite yet, however, as he has battled injuries the last two years. During training camp in 2019, Beason tore his ACL and redshirted his freshman year. Last season, Beason battled some ankle injuries that sidelined him for a game.

Beason saw some game action in 2020 but started just twice. Now, hopefully fully healthy, Beason should be able to make the impact he envisioned when he first committed to Illinois. With the departure of Nate Hobbs, the cornerback position is pretty slim, nearly guaranteeing him a starting role right away.

The Illini secondary was by far the weakest link in 2020 and the defense as a whole ranked last in defensive efficiency and second-to-last in pass defense in the Big Ten. Beason taking a step up this spring would make for a smooth transition to the lineup come August, and a playmaker down the field is a necessity for Illinois.

With Kendrick Green pursuing a National Football League career, a starting spot is open on the Illini offensive line. While Wofford transfer Blake Jeresaty has the most collegiate experience, offensive line coach Bart Miller said Monday that multiple guys were being considered for the spot, including Jeresaty and Pihlstrom.

The former walk-on was awarded a scholarship in the middle of last season following his first career start against Purdue. Pihlstrom filled in for Green, who assumed the center position for a couple games while Doug Kramer was out due to contact tracing. While Pihlstrom only started the two games Kramer was out, he played in all eight games last season after playing in just one game as a sophomore.

Having in-game experience, along with a new staff with a clean slate, Pihlstrom has a legit chance at being a key contributor to the Illini’s highly-rated o-line. Because he played with starters like Alex Palczewski and Vederian Lowe last season, having him in the starting lineup would make for a very smooth transition in the fall.

Along with Beason, Cooper was one of Lovie’s top recruits, but he has yet to make a big impact for the Illini. Named a four-star recruit by 247Sports and ESPN, Cooper is a linebacker out of St. Louis who had offers from power-five schools all around the country, including Clemson, Louisiana State, Ohio State, Texas and Wisconsin. However, he has played in just seven games across his two seasons as an Illini.

But with the departure of Milo Eifler, Cooper will be one of the guys competing for the open starting linebacker spot. However, Bielema told the media last week that Cooper is one of the players who is on a return-to-play plan after suffering a season-ending injury in the fall.

Assuming Cooper makes strides in the rehab process this spring, his athleticism and untapped potential could be crucial for the Illini, who are thin at nearly every defensive position.

Recruited as a defensive end, Coleman — along with starters Owen Carney Jr. and Isaiah Gay — have been moved to outside linebacker. Outside linebackers coach Kevin Kane indicated the Illini who made the move will be tasked with rushing the passer, dropping in coverage and playing at the line of scrimmage during three- or four-man fronts.

Coleman began to show his potential last season, starting in four games and recording 13 tackles and 3.5 tackles for loss through all eight games. Standing at 6-foot-5, 230 pounds, Coleman should be able to make a swift transition to being more of an edge rusher.

“He’s got great ability, I think, eventually as an outside pass rusher,” said Smith about Coleman last season following the loss to Iowa. “He’s got to continue to develop strength, size, all of that. But I like the athlete. We like everything he’s done. He’ll continue to get better and better. When we’re in an ideal world for us defensive line-wise, we’re playing about eight-plus guys, and they’re all getting reps and they’re all staying fresh. I see Seth being a part of that rotation.”

In his two seasons at Illinois, Cumby has served as a running back and a wide receiver for Lovie Smith, but as of now, the redshirt sophomore is listed as a receiver. With an inexperienced receiver room heading into the year, Cumby has a shot at earning consistent playing time at the position, something he hasn’t experienced yet.

If Cumby does earn a consistent role with the offense, he will most likely be a slot receiver, as his speed is unmatched within the program. However, Cumby’s biggest role might be as a punt returner to maximize his quickness and generate better production out of Illinois’ special teams unit. While the punters and kickers haven’t been an issue, the return game has struggled in recent years, and Cumby could really turn that around if he has a solid spring.