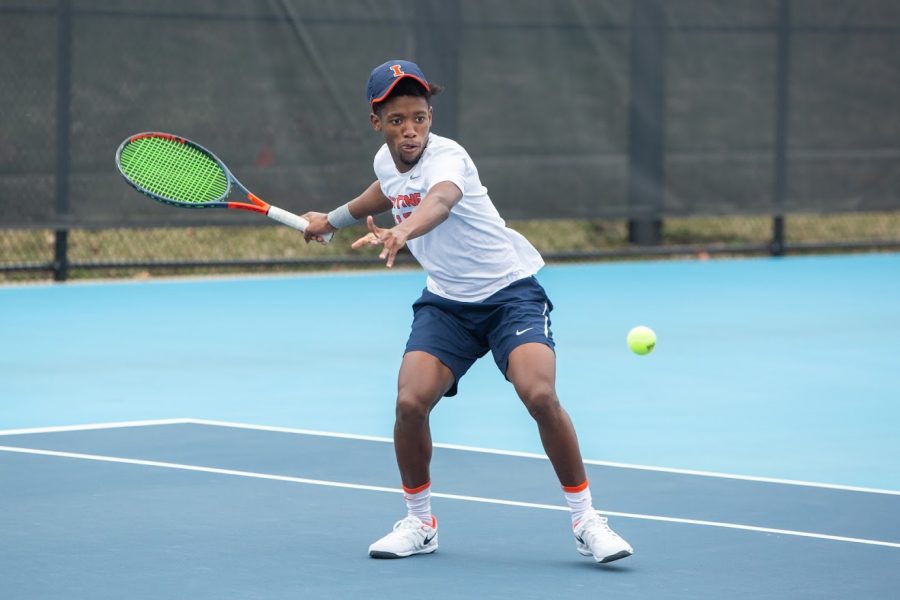 Around 3 p.m. Sunday, Siphosothando Montsi hunkered down at Slim Chickens, eating a post-match meal with a few teammates. He was exhausted, relieved and hungry. Hungry for a meal of seven chicken tenders, Texas toast and side of fries, yes, but even more so for more wins.

When he arrived at Illinois three years ago, Montsi set three goals for himself: play at each of the top three spots in the starting lineup, win as many matches as possible and garner an All-American title at some point in his tennis career. What seemed to be far-reaching for him as a freshman isn’t so much as a redshirt sophomore now — in fact, he’s already accomplished two of them.

This season, Montsi elevated his game to new heights. Aside from consistently opening matches at the No. 1 and No. 2 singles positions, Montsi is undefeated, and he carries that achievement as he carries himself: unrelenting and unfaltering.

“Obviously, I think about (being undefeated), but not too much,” Montsi said. “I had a good run indoors, and I just wanted to take it one match at a time, and I don’t know, everything … went by kinda fast, and now, I’m here.”

Montsi’s work ethic is arguably the definition of “the grind.” When COVID-19 cut the season short last year, Montsi quarantined in Florida to train with professional players. By the time the season kicked back up, he showed up to the gym on his own time in addition to the scheduled team workouts.

The extra hours transpired into what Montsi thinks is his best season yet, and his singles records show it: Freshman year, he debuted with a 10-10 record; sophomore year, he went 17-9 with a 2020 Second Team All-Big Ten appearance while earning a career-best Intercollegiate Tennis Association ranking of 42. This year, he earned a personal best 12-0 winning streak with an ITA ranking of 54. So far, he believes he’s on the right track to achieving his third aspiration.

“I know that I’m being watched a little more with the way I practice and do things, so I set a higher standard for myself in terms of my work ethic and the way I go about things this year,” Montsi said. “The bigger role I play this year is not just on the court. It’s also encouraging other guys, and pushing the young guys to do the right things and get better and just going about things the right way every single day as much as I can.”

This new role is something Montsi takes pride in, especially because of his relationship with his teammates. According to Montsi, most of them want to compete professionally after college, so everyone on the team strives to better each other. Their support has played an integral part in his improvements and achievements.

“We’ve always had good team chemistry, but I think this year, the team chemistry is just the best it’s been since I’ve been here, and I know from the older guys, they say that too,” Montsi said.

“I’ve seen a lot of teams where there’s sort of groups within the team, but with our team, everybody gets along really well — we’re not like that. And it definitely helps us on the court, you know, the guys on the bench, after you play a match, everyone is out cheering for you, and it feels good to know that everyone’s 100% behind your back.”

Though match wins have become almost routine for Montsi, the process hasn’t gotten any easier. With the near seven hours spent training daily on the weekdays and the weekend schedule packed with two matches, he finds himself physically drained quite often.

When the fatigue hits, however, he refuses to give in. Instead, he thinks of his family, who live in South Africa. Though he’s traveled around quite a bit to different places outside of his hometown of East London, Montsi settled in Champaign not only in pursuit of the goals he set for himself, but also for his loved ones.

“I would say the biggest motivation is really my family,” Montsi said. “That’s what motivates me to do everything in life, so I just work hard for them. I always want to put my family in a better place than where we are right now. I know that they’re looking at me to do well, so I embrace that, and I work hard for them so one day, everything’s better.”

Before Montsi can think about the Big Ten and NCAA tournaments, which will commence April 29 and May 7, respectively, he will attempt to carry out the remaining six matches of the regular season with diligence and focus with support from his ensemble.

As for the All-American title, that’s next on Montsi’s long-term radar. For now, the Slim Chickens “Hungry Meal” will have to suffice.