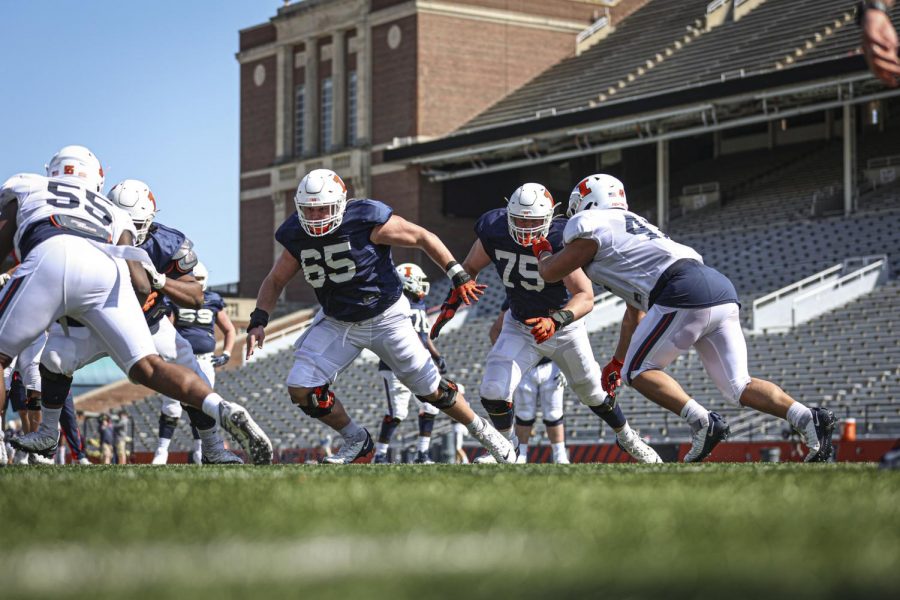 After being just the second hire made by head coach Bret Bielema, new offensive line coach Bart Miller caught the eye of many with an impressive opening press conference. High expectations for the young coach, combined with the return of several veteran players, have the Illini hoping for big things out from their offensive line in 2021.
Along with the hiring of Miller, seniors Alex Palczewski, Doug Kramer and Vederian Lowe all made the decision to return to the Illini for an extra year of eligibility. Palczewski, Kramer and Lowe were all thrown into the offensive line mix starting their freshman seasons and have significantly contributed to Illinois’ success over the last four years.
With the combination of talent and veteran leadership, Miller understands how important getting these players back for this season is. He has been working with each of them and has loved what they’ve each brought to the table so far this spring.
“I appreciate the way those guys come out to practice and when they come to learn. When they walk into my meeting, they’re prepared,” Miller said. “That’s the difference between winning and losing is the details, and that’s what a veteran and mature group like this gives you.”
As for all the returning offensive line members, most of them have played under multiple o-line coaches during their careers at Illinois. Under Lovie Smith, the now fifth-year seniors have been coached by two different o-line coaches.
Though returning linemen are used to a change in leadership, Miller has already seemed to have won over the group. Lowe said his new coach has made everyone feel comfortable and that the work they’ve done together thus far has been impressive.
“Coach Miller, he’s been great. I’ve loved playing for him these last few weeks,” Lowe said. “He gets it. He gets that sometimes things aren’t always gonna be the prettiest. As long as you’re tough, as long as you’re dominant, as long as you’re physical, and as long as you make the right aiming points and try and dominate your guy across from you every play, then that’s what he wants. And that’s probably the main difference in this year and last year.”
With Palczewski, Kramer and Lowe returning, the right tackle, center and left tackle spots seemed to be locked up. However, the two guard spots seem to be up for grabs between a number of different linemen.
Blake Jeresaty, an FCS All-American transfer from Wofford, sat out last season due to an injury. He is one of the top contenders for one of the guard spots and is expected to see the field a lot this season. Julian Pearl filled in last season at right tackle when Palczewski went down, and he has received praise from coaches and players for his work early on in spring ball.
Verdis Brown, Alex Pihlstrom and Jordyn Slaughter were also players named by Miller as potential starters this year on the line. Whoever does get the spot, though, will be the best in Miller’s mind, as he knows how important it is to protect the quarterback in the Big Ten.
“There’s gonna be an open competition at some of those guard spots. Now there’s been some guys that have stepped up,” Miller said. “We want to be able to put the best five out on the field … Our guard position is incredibly important to the way we block things.”
No matter who does play, having three talented veterans coming back sets the Illini up for a successful year on the offensive line. Miller has impressed thus far with what he’s said, including one key phrase: ‘o-line pride.’
‘O-line pride’ is something the Illini offensive line has carried with them for quite some time now, but Miller has come in and added his own spin to the saying. He stresses toughness, physicality and teamwork, which is what he plans on his guys playing with this season and more.
“There’s a laundry list (in the locker room) of key points of what that means, of what o-line pride really is. It’s taking pride and doing a job that nobody else has the ability or the desire to do,” Miller said. “The meanest, the toughest, the nastiest on the field, but it goes deeper than that. It’s a brotherhood. It’s a foundation that’s forced through hardship of playing this position … That’s where winners are, is where nobody else wants to go.”
Bart Miller and the offensive line will have their first chance to show off for fans during the spring game on April 19 at Memorial Stadium.