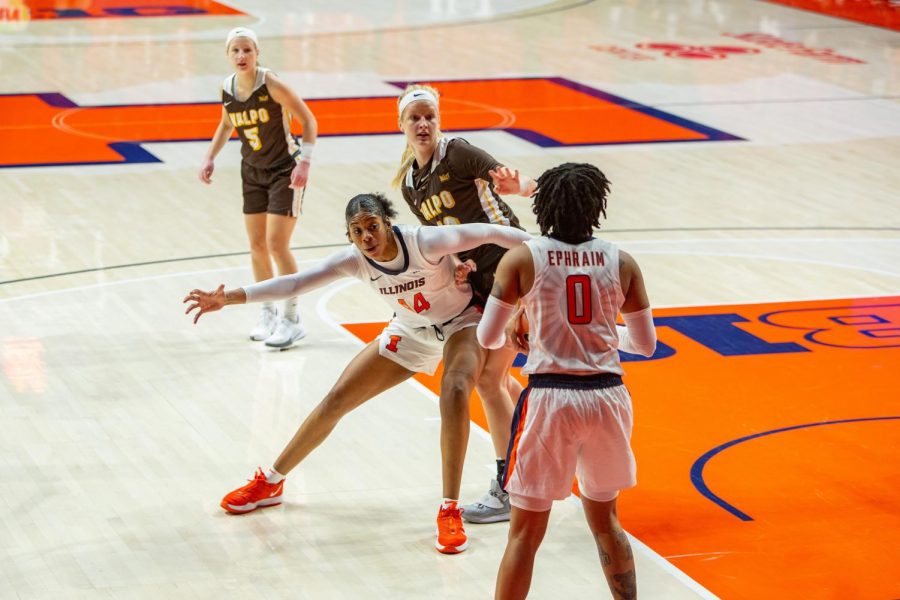 Kennedi Myles calls for the ball from J-Naya Ephraim Dec. 2 when Illinois faced Valparaiso. Both players have chosen to play elsewhere next season, with Myles already announcing her decision to transfer to Marquette.

The Illinois women’s basketball team is undergoing major personnel changes, with four former players currently in the transfer portal and two seniors departing after they graduate in May.

Sophomore Kennedi Myles has already found a new home at Marquette after announcing her decision to transfer six days ago. Myles started all 23 games for the Illini and was the team’s third-highest scorer and leading rebounder last season, averaging 8.7 points and eight points per game. The Cincinnati native joins the Golden Eagles, who finished second in the Big East behind powerhouse Connecticut and made the NCAA tournament as a 10-seed.

Sophomore Jeanae Terry also announced her desire to leave Champaign Friday. Terry made a big jump following her freshman season and was one of the team’s most consistent players this year, starting every game while ranking second in both points and rebounds, going for 10.7 and 7.8, respectively, per game. The Detroit native led the team in both steals and assists and notched a team-high seven double-doubles. Terry has not yet announced her plans for next season, though she will likely take on a prominent role wherever she ends up next season.

Two other Illini announced their respective transfer decisions: Junior J-Naya Ephraim and freshman Aaliyah McQueen. Ephraim started 12 of the team’s opening 13 games and finished the season with the third-most assists with 37 while averaging 4.3 points per game. McQueen didn’t make any starts in her first year at Illinois, though she averaged two points and 2.6 rebounds across 19 games played.

Illinois currently has eight players returning next season, including leading scorer Jada Peebles, who averaged 11.6 points per game, Aaliyah Nye, who had an impressive freshman season with 10 starts and 8.1 points per games, and Eva Rubin, who started 20 games and averaged 7.3 points per game after transferring to Illinois from Arizona State.

There is still hope for head coach Nancy Fahey and the Illini, as it is bringing in three recruits: Adalia McKenzie, a four-star Minnesota native who is considered one of the state’s top players; Jayla Oden, a three-star Baltimore native who is one of the top high school point guards in Maryland; and Keanna Rembert, a Raleigh, North Carolina native who played with Ephraim and Peebles for NC Zoom.

Terry, Ephraim and McQueen have yet to choose their new schools, but expect announcements from these players over the next few weeks.