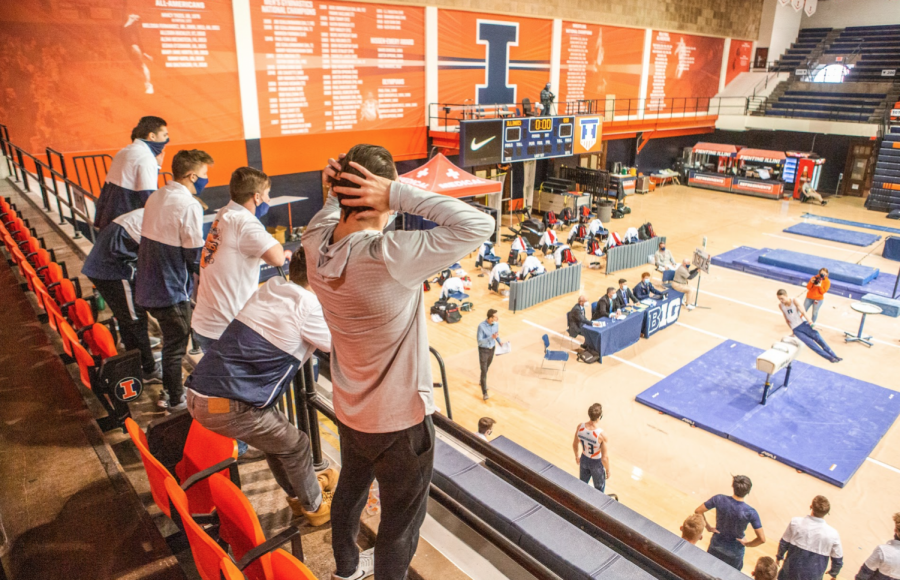 Non-competing members of the Illinois men’s gymnastics team cheer while overlooking a teammate on the pommel horse in a meet against Ohio State Jan. 23. The team is set to compete in Lincoln, Nebraska, this weekend for the Big Ten Championships despite multiple gymnasts being injured.

On Saturday, the Illinois men’s gymnastics team will do something in Lincoln, Nebraska that it hasn’t done in almost two years: compete in the postseason.

Last year, the team was nearing the end of its regular season when all remaining competition was abruptly canceled on March 12. The team’s postseason hopes were dashed, and for some members of the team, their careers were suddenly over.

This season, the team had to make major sacrifices to practice and compete safely. After a shorter-than-normal, six-meet regular season, which included a tri-meet, the Illini are finally in the postseason after going 4-3 in the regular season. They went 3-3 against Big Ten opponents.

“We had a lot of high points and a lot of low points,” said graduate gymnast Danny Graham. “Injuries have been tough this year. It’s tough losing a bunch of our top guys.”

Injuries have been mounting all season for the Illini, and at least six gymnasts have been ruled out for the Big Ten Championships. Of the 30 routines head coach Justin Spring would normally have in the lineup for any given meet, he had to replace 21 of them, a number he has never previously faced in his 12-year coaching career.

“The fact of the matter is that’s our team right now,” Spring said. “We’ve got three guys that are competing on every event that normally wouldn’t see lineup. It’s not that they’re not solid gymnasts; it’s just that we’re missing our superstars.”

Spring will rely heavily upon senior Jordan Kovach and junior Michael Fletcher this weekend. As all-arounders, Kovach and Fletcher will combine to contribute one-third of Illinois’ total team score. The team will also receive a boost on still rings with Graham returning to full strength after a three-week COVID-19 quarantine last month.

But the injuries are forcing Spring to alter his strategy. Without high-scoring gymnasts to place in the anchor position, he is instead depending on consistency from the gymnasts competing ahead of the others. Though consistency has been problematic for the Illini this season, Spring is impressed with what he’s seen in practice since the meet against Minnesota two weeks ago.

“The week after Minnesota was one of the better weeks of training we’ve had in a long time,” Spring said. “When you look at our averages over the last two weeks, they’re looking pretty good. I’m excited for one of the better consistencies of the year, and this is a good time to have it, going into the postseason.”

The team will certainly have its work cut out for them when it faces all six of its Big Ten opponents. Illinois defeated Ohio State, Nebraska and Minnesota this season while narrowly losing to Penn State and Iowa.

But none of that matters given the injuries and the fact that it’s the conference’s championship event.

“As other teams have gotten better, stronger and more consistent, we’ve lost guys,” Spring said. “But it’s a championship event, and I believe that anything can happen. We’re in the middle of the ranks, and I think we have a good shot at contending.”

Michigan, however, is a whole different team than anyone else the Illini have faced this season. Ranked No. 2 in the nation, the Wolverines defeated the Illini by almost eight points en route to a perfect 7-0 season and the regular-season Big Ten championship. Two of their gymnasts — Cameron Bock and Paul Juda — made the U.S. men’s national gymnastics team this season, and the team’s highest score of the season (414.200) is only .25 points lower than No. 1 Oklahoma’s highest score.

“Michigan, without question, is the team to beat,” Spring said. “They’re an outstanding team this year. If we’re going to keep up with them, we’re going to need our front-end lineups to do better than their front-end lineups. We don’t have anyone on our team right now that can put up the scores that those two guys (Bock and Juda) are putting in at the end of their lineups.”

That will be a tough mountain to overcome, but Spring isn’t ruling out his team, which includes conference-ranked gymnasts Evan Manivong (No. 2 on vault), Connor McCool (No. 5 on floor exercise), Ian Skirkey (No. 5 on pommel horse), Graham (No. 5 on still rings) and Fletcher (No. 9 in all-around).

The Big Ten Championships will be broadcasted live on the Big Ten Network starting at 7 p.m. Saturday.