Illinois prepares to host No. 1 Nebraska 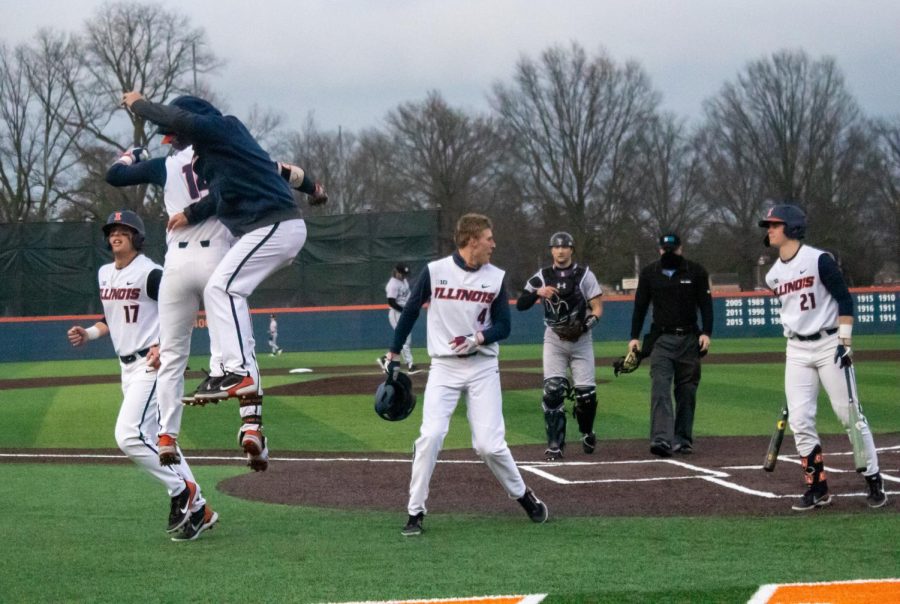 The Illinois baseball team celebrates after coming off the field during a game against Northwestern on March 26. The team is preparing to host Nebraska this weekend at Illinois Field.

In their fifth pod of the season, the Illini will host their second series at Illinois Field this weekend. On Friday, Illinois will open up a three-game series against Nebraska, the No. 1 team in the Big Ten.

Illinois’ (7-8) last outing at home resulted in a 2-1 series loss against Northwestern (9-5), who rank first in the conference in batting average (.304). The Wildcats exposed the Illini’s pitching staff, tying the Illinois Field single-game team home record at nine, which was originally set in 1991.

“We hit a hot Northwestern team last week that really swung their bats well,” said head coach Dan Hartleb. “We get the same number of outs and at-bats as they do, so you just have to figure it out. You can’t use it as an excuse. Is it a factor? Absolutely. Is it an excuse? No.”

Nebraska is on a six-game winning streak, coming off a four-game series sweep against Minnesota in which they scored 39 runs on 36 hits.

The Wildcats’ eight errors last weekend allowed the Illini to keep the series competitive. However, the Cornhuskers rank last in the Big Ten in errors made, with just seven committed across 16 games played.

Fatigue within the pitching staff began setting in, with pitcher Riley Gowens out last week against Northwestern. The week off provided Gowens with the ample time needed to start Sunday for Illinois.

“We’ve always protected our pitchers,” Hartleb said. “The most important thing is we have them for the long haul. Even if it’s not early, you do what’s right for the pitcher.”

With the absence of the Big Ten Tournament this season, a series sweep by the Illini would bode well for their postseason resume, as they have yet to win out an entire series. The Illini will look to their hitters for several strong performances in the series as now five Illini hold batting averages above .300 —  Branden Comia, Justin Janas, Ryan Hampe, Jackson Raper and Taylor Jackson —  with Comia leading the way at .370.

Nebraska mirrors Illinois in its lack of experience in the dugout, returning only four players that started all 15 games last season. However, the Cornhuskers boast one of the most athletic and versatile starting lineups in the Big Ten. Spencer Schwellenbach, team captain and leader in runs (16), was the only Big Ten player named a Division I Second-Team Preseason All-American.

Schwellenbach is a double-edged sword, as he boasts the team’s third best batting average (.333) while dealing a nasty breaking ball in addition to his mid-90s fastball off the mound.

The Illini will need the continued spark that Raper has been providing over the last few games. His two 3-run homers in Saturday’s game against the Wildcats sparked life in the dugout and in the stands, where the Illini’s parents sat for the first time this season. The home field advantage should aid the Illini against the top team in the conference.

Pitcher Nathan Lavender will get the start Friday evening after throwing nine strikeouts in the win over Northwestern last Friday.

“We need to be a little bit more consistent with our starts, and it comes down to lack of experience right now,” Hartleb said. “This is a perfect opportunity right now to see where he’s at. I love having Nate in the bullpen. Obviously, you get yourself in a win situation, you bring him in and you feel really good about it.”

Hartleb’s long-standing reputation of recruiting the nation’s best shortstops has continued with the recent play of Comia. He’s hitting 17-for-28 over the last seven games and extended his on-base streak last Sunday to 33 games. Comia is leading the team in batting average (.370), hits (20), runs (15) and doubles and will be the focal point for the Cornhuskers’ staff on the mound.

Due to forecasted high winds over the weekend, Illinois’ pod against Nebraska will begin at 6 p.m. Friday. Saturday’s matchup has been moved to 5 p.m., while Sunday’s original start time will remain the same at noon.