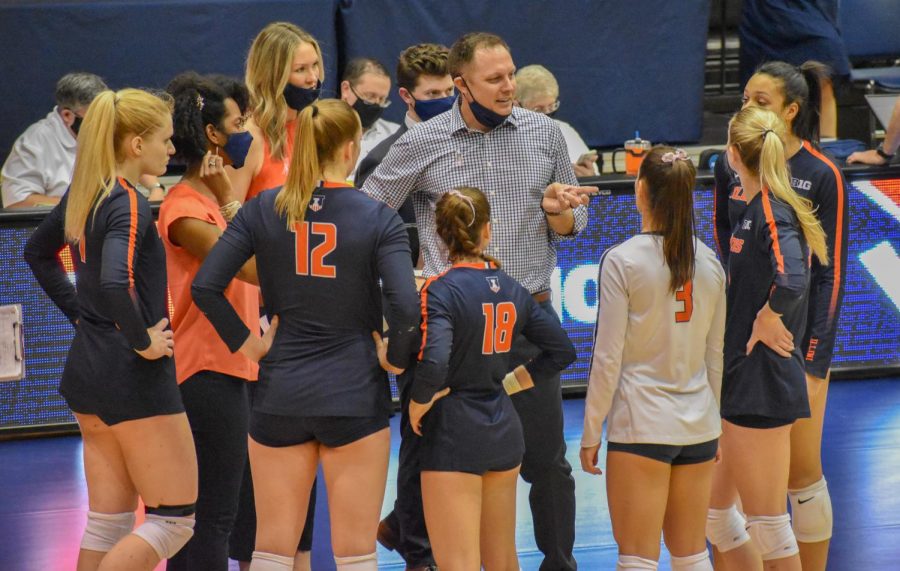 The Illinois volleyball team huddles up for a talk with coach Chris Tamas in a game against Indiana on Saturday. The struggling team will face Purdue in West Lafayette, Indiana on Friday and Saturday.

As the final outings of the volleyball season approaches, Illinois has some hard-earned momentum and a chance to end its turbulent season on a high note. It won’t come easy, however, as it will have to face a red-hot No. 8 Purdue team in West Lafayette, Indiana on Friday and Saturday at 6 p.m. and 12:30 p.m., respectively.

Last week, Purdue won a pair of matches over No. 9 Ohio State and swept the weekly awards for the first time in program history as a result. Outside hitter Grace Cleveland was named Player of the Week, defensive specialist Jena Otec earned Defensive Player of the Week honors, Hayley Bush got the Co-Setter of the Week award and middle blocker Taylor Trammell won Freshman of the Week.

With so many players playing at an elite level right now, game planning against Purdue will be a headache for Illinois. A start would likely be trying to contain Cleveland, who has been superb on both offense and defense, averaging 3.33 kills and 1.44 blocks per set this season.

“We’re playing a top-10 team in Purdue, and it’s a good challenge to see,” said head coach Chris Tamas. “We had that long stretch of playing those top-12 teams or so, and now we get the other team that’s top-12 in our conference … Purdue’s a great defensive team, and their experience is against a lot of the teams in our conference this year, so it gives us another opportunity to play against Big Ten competition and hopefully squeak a couple out this weekend.”

After enduring a grueling 10-match losing streak, the Illini find themselves on a four-match winning streak. While Illinois’ quality of play has gone up a bit as the season has progressed, one big difference between the losses and wins was simply the level of opponents they were facing. Their entire losing streak came solely against top-12 ranked opponents, while their winning streak has come only against teams under .500. With Purdue being a top-10 ranked team, the Illini will get one last chance to show if this year’s team can stand up to top-tier competition.

“Obviously, the win column has changed, but I would say with how we approach things I don’t think much has changed there,” Tamas said. “We always talk about how we go about our business, and the competition is the competition. We can only control what’s going on on our side of the net or at least what’s happening in our gym from week to week. Sometimes the matchup is there, and sometimes we’re still in a growth process in terms of what our team make-up has been.

“We’ve had some injuries and roster changes we’ve had to make. Overall, we’re doing our best, and that’s kind of what we talked about and to be great teammates in the process.”

If Illinois can pull off an upset this weekend, it would be able to end its season with tangible proof of how far it has come. Tamas alluded to Ellie Holzman’s early-season ACL tear as something that’s thrown off the team a bit this year, as she had been a centerpiece they had planned around. It’s likely a contributing factor as to why the team shifted from a 6-2 to a 5-1 rotation midway through the season.

All the team’s work and Tamas’ adjustments seem to finally be translating into wins. Now, all that’s left is to prove themselves in a final test.