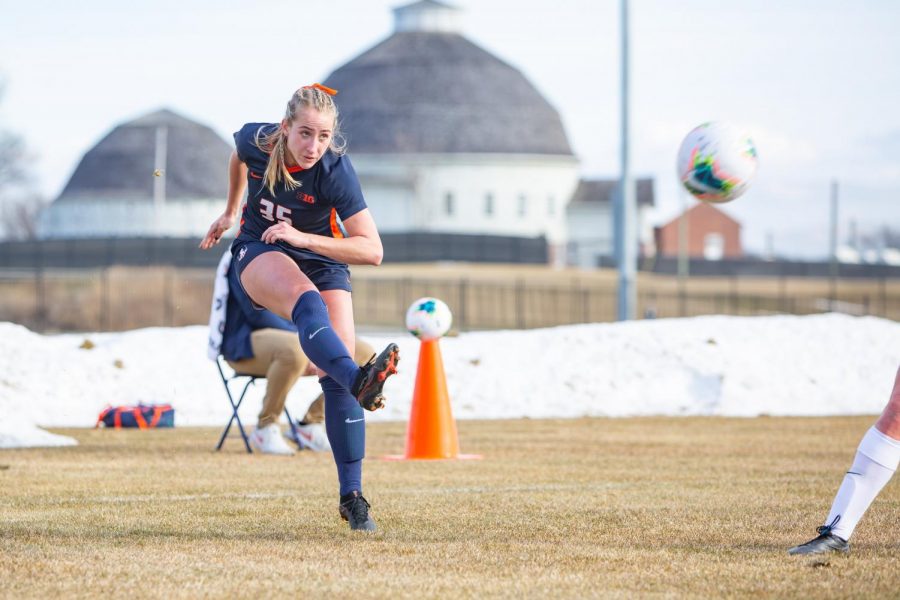 Junior Lauren Stibich kicks the ball during a game against Iowa on Feb. 25. The Illini soccer team is set to finish off their regular season at Northwestern today.

Forty-four days since its season began, Illinois (5-4-1) soccer is preparing to play its final regular season game against Northwestern (5-5) for an in-state showdown in Evanston.

“It’s hard to believe that we’re heading into the last regularly scheduled season game,” said head coach Janet Rayfield. “It’s been a long season in some ways and really short ways in others, and so it’s interesting to see as we look toward the end of it, but we’re in a position to finish the season strong.”

It has been a wild ride for the Illini, and as it stands, they are set for a slight improvement from their finish during the 2019 season. They currently sit in eighth place in the Big Ten Conference table, and with a win, depending on how the teams above them do, Illinois has potential to finish seventh, giving it a better seed in the upcoming Big Ten Tournament.

Both Illinois and Northwestern have scored 11 goals and conceded nine. The Wildcats’ top goalscorers are Aurea Martin and Olivia Stone, who have three goals apiece. All three of Stone’s goals have been game winners.

As for Illinois, Kendra Pasquale and Makena Silber are the top two goalscorers with four and three, respectively, under their names. Like Stone, Silber’s three goals have also all been game winners.

Coaches always like to finish out their season strong, and with Illinois, Rayfield has high expectations for her team to get the victory against Northwestern.

“I just hope that they take everything that they’ve experienced and everything they have learned and play with the joy and the passion that fueled them to get through this,” Rayfield said.

Rayfield referenced the COVID-19 testing by the University and limiting their activities to continue playing every week. She emphasized the joy and passion of the team and coupled it with experiences they have gained with the extensive amount of time players have spent with each other.

With an in-state showdown, there is always going to be a natural rivalry to see who can be the better Illinois team. In the last four years, the Illini have won two games and lost one against the Wildcats.

“It’s that sort of little extra motivation or just an extra spotlight on this game being an in-state rivalry, but, like every game, we’re going to try to focus on ourselves and the things we need to do,” Rayfield said.

Northwestern’s greatest strength is that it is a well-organized and disciplined team.

“Coach Moynihan has a well-organized and disciplined team on both sides of the ball,” Rayfield said. “They don’t leave out the details and are going to be technically clean. So I think it’s a very team-oriented program and system. You can’t focus on any one player because they really rely on the strength of their unit and collective discipline.”

For Illinois, that means it is going to have to counterattack Northwestern’s game by being a good collective and disciplined team to take care of all the details. If the Illini let their guard down, the Wildcats will pounce on the opportunity.

Last weekend, Illinois grabbed a win on the road against Michigan State after Silber scored the game-winning goal in the 83rd minute. Looking at Northwestern, which was also on the road, fell to Ohio State 1-0 after conceding an early goal and failed to respond.

Kickoff is at noon central time and can be streamed on Big Ten Network+.