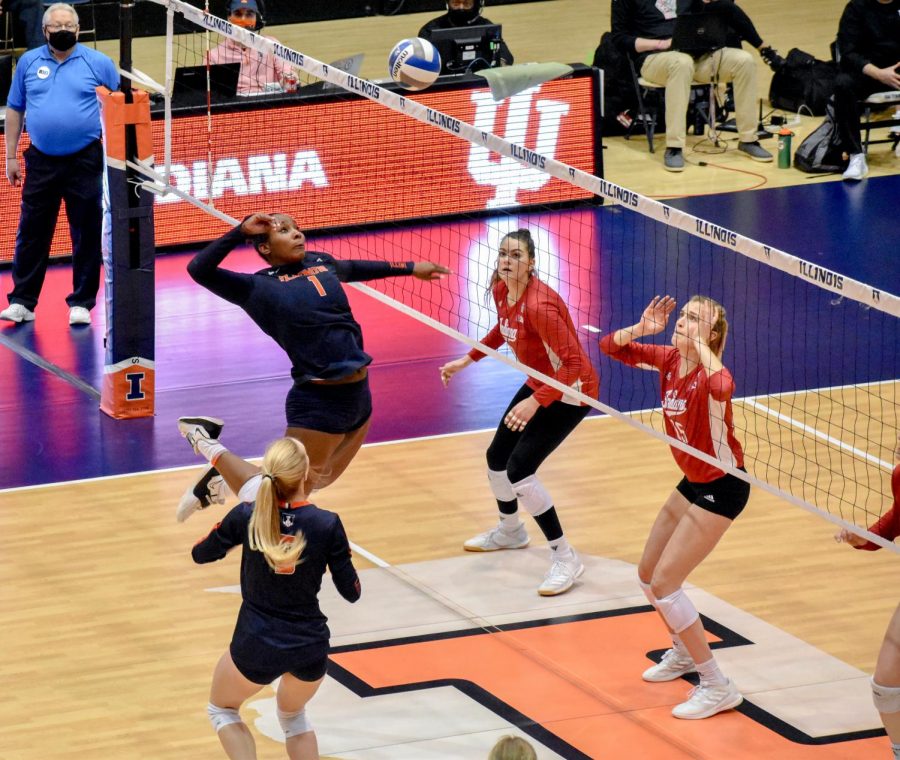 Sophomore Kennedy Collins jumps to spike a ball in the game against Indiana on March 27. The Illinois volleyball team lost to Purdue yesterday, but redeemed themselves with a 3-2 win today.

Ending a season unlike any other, all of the challenges Illinois has faced finally paid off in the form of a signature 3-2 win over No. 8 Purdue on Saturday after a 0-3 loss on Friday.

At this point in the season, Illinois had nothing left to fight for; the Illini had faced potentially the most difficult schedule in the country and their 6-11 record heading into the match put them squarely out of tournament contention. The team had battled both major and minor injuries across the roster all season, while COVID-19 had made just about everything more difficult.

When Illinois was at its lowest point of the season, sitting at 2-10, head coach Chris Tamas mentioned how easy it would’ve been for the team to quit on the season. After a team meeting that week in which the seniors on the roster supposedly asked the team to help them end their careers on a high note, Illinois quietly started crawling back toward .500.

Since then, Illinois had gone 4-0 heading into the weeks, but on Friday, they dropped a tough match to Purdue. On Saturday, however, the team came out determined to do the impossible and found a way to pull through, beating their first ranked opponent of the season despite being 0-7 against prior ranked teams.

Illinois dropped the first set 25-15 and sluggish but came out dominant in the second winning 25-21. After another sizable 25-18 loss in the third set, the Illini dug their feet in and played a back-and-forth fourth set. After falling behind 5-10 early, Illinois fought its way back into the match and ultimately won 27-25 on a block assist between Diana Brown and Kyla Swanson.

Illinois had been 1-3 on the season in prior fifth sets and 0-3 against ranked opponents, but it didn’t show. After finding themselves on the losing end of that scenario many times before, Illinois knew the importance of jumping out early and won 15-11 on a kill by Megan Cooney.

“It was really exciting for me,” said Cooney on her match and season ending kill. “I was thankful for having (Diana Brown) to trust in me to set me that last ball and just really going for it in that moment and just trying to close out that fifth set with that team. It was super exciting and just to turn around and have my team celebrating and running towards me at the end is just a great feeling.”

The win itself came as a result of production across the roster, something Tamas had been talking about improving all year. Among the hitters, Bruna Vrankovic had a career-high 23 kills, Raina Terry had 17 and Megan Cooney had 14. All three of them put up double-doubles with digs, helping Illinois keep a combined 33 plays alive.

The effort didn’t stop there, as Diana Brown had a double-double herself, posting 49 assists, 14 digs, and three block assists. With Rylee Hinton out this weekend, Kyla Swanson filled in admirably with six total blocks on Saturday.

After the match, head coach Chris Tamas announced that senior Megan Cooney will be coming back for another year, which will be a major boost for the Illini next season. With the team’s young core development this year along with the elder statesmanship of Cooney, Illinois may be able to return to the national spotlight next season.

“I just decided this past week that this is what’s right for me,” said Cooney on staying an extra year. “I’m going to continue grad school to become a speech pathologist here. Working towards my future career and getting to play another season of volleyball is a win-win for sure. I’m super excited to continue to be an Illini, continue to play on this team. My coaches are super stoked and my teammates as well, so I’m ready to get back at it.”

Looking back on the season, it will likely be remembered as the most difficult so far of Tamas’ tenure. The Illini dealt with a 10-match losing streak, COVID-19 restrictions and cancellations and injuries. In spite of it all, however, it will also be remembered for this win, which may signify a turning point in the program. After a season of ever-changing roles and rotations, Illinois was finally able to put all the pieces together and turn in a signature win. Now with some major momentum, they’ll look to carry it into the offseason and translate it into wins in the fall.

“It was definitely a crazy season and not one that I was expecting with COVID-19 and everything,” said Terry. “But I think there’s a lot of good to take away from this season. We had a lot of challenging teams that we played, and we played with all of them. There wasn’t really any match where we laid down and died. We gave it our all every time. I’m going to look back (on this season) and see all of the good and not really any of the bad that happened.”