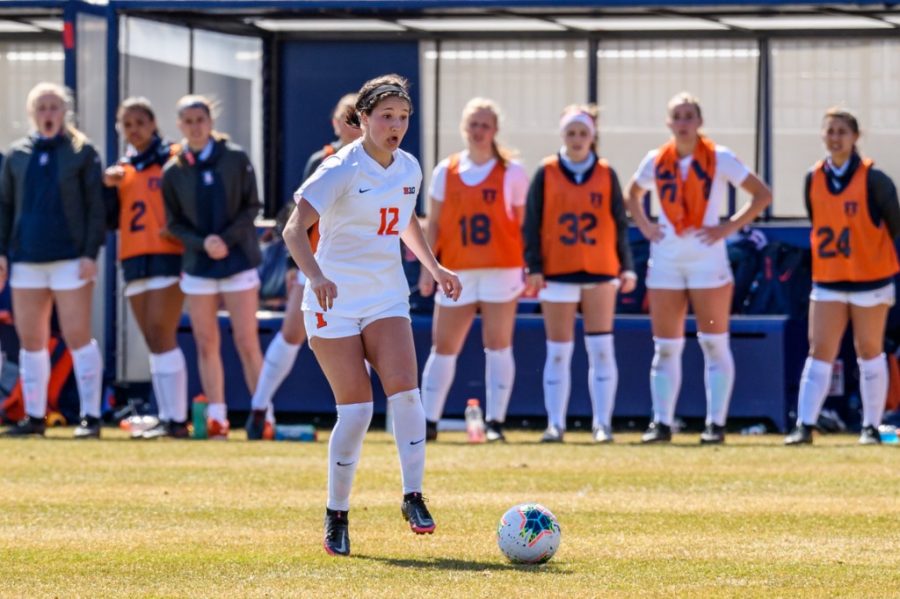 Redshirt sophomore Kendra Pasquale looks for an opportunity to pass the ball during the game against Ohio State on March 21. Pasquale scored the winning goal against Northwestern today in Evanston, Illinois.

In the final game of the season, Illinois took home the Illinois showdown against Northwestern. Goals from Maggie Hillman and a Kendra Pasquale game winner helped the Illini earn a 2-1 win.

Playing in Evanston means playing on an artificial turf field and on the lakefront. A combination of wind and turf added some struggle to the Illini.

Both teams started off the first half with a lot of energy on the field. The first chance came from a freekick right by the corner flag near the Northwestern goal. The usual corner and long distance set piece taker Aleah Treiterer looked for Eileen Murphy’s head to get an early goal but hit the side netting.

While Illinois had their chances every once in a while, they were continuously locked down by Northwestern’s back four. Although playing physical and aggressive, they struggled to get shots off and on goal.

As for the Wildcats, they controlled the first half. With Illinois unable to pounce on their opportunities, Northwestern was the opposite. Speed and high pressure from the Wildcats caused some problems for the Illini.

In the 14th minute, an over the top ball from Northwestern led to miscommunication between Sami Sample and Joanna Verzosa-Dolezal. The clearance landed right to the feet of Northwestern’s Regan Steigleder. The midfielder took it to the edge of the box and sent a powerful shot into Sample’s net to put them up 1-0.

“The ball gets played over the top and there’s wind and it’s hard to judge how fast the ball is coming,” Rayfield said. “That started the beginning of a scramble, and Northwestern took advantage of the ball.”

The second half saw a slight turn around in the Illini. A bit more connection and aggressive play on the field got them a couple shots off in the Northwestern defensive third.

With Illinois’ aggressive and tenacious mindset, they were able to get a goal in the 69th minute. A failed clearance from a Wildcat defender in the box led to Zoey Kollhoff taking advantage of the mistake and Maggie Hillman poking it into goal for the equalizer.

“One of the things we talked about at halftime was that the wind makes it hard and that anything can happen and be ready for those things,” Rayfield said. “…the defender kind of deflected it and was trying to figure out how to get it out of the box and we pounced on that and were able to finish. Those are the kinds of goals you need on the road on a surface that you are not used to playing on and the wind”

The remaining 20 minutes saw Northwestern and Illinois fighting for the game winner. Shots from both teams came close, but none were clinical.

Less than two minutes left in the match, the game was looking to go into overtime. Makena Silber outmuscled her defender to get a pass to Summer Garrison in the box. After a failed shot coming back to her, she gave it to a wide open Pasquale putting it into the back of the net.

Rayfield said the last minute goal from Pasquale gave her some relief.

“Thirty seconds earlier they (Northwestern) served a ball in and had an open player in the box and couldn’t quite get on the end of it,” Rayfield said. “So you kind of go from ‘Oh my gosh they have a chance to now giving us a chance.’”

Composure is something that’s been talked about with the team and it was exactly what led Pasquale’s goal.

“It was literally the epitome of it,” Rayfield said. “Ball is bouncing around and she (Garrison) calmly composely settles the ball, plays it out to Kendra (Pasquale), and Kendra was able to finish.

In the remaining minute and 13 seconds of the match, Northwestern scrambled for an answer to get them level, but they were unable to get anything off.

For the first time this season, Illinois played without their top player Hope Breslin in midfield due to getting a knock on her ankle after the game against Michigan. Although missed on the field, Rayfield credits players who stepped up to take over her role in the midfield.

Coming up next for Illinois is the Big Ten Tournament with the preliminary rounds taking place next weekend April 8-11.