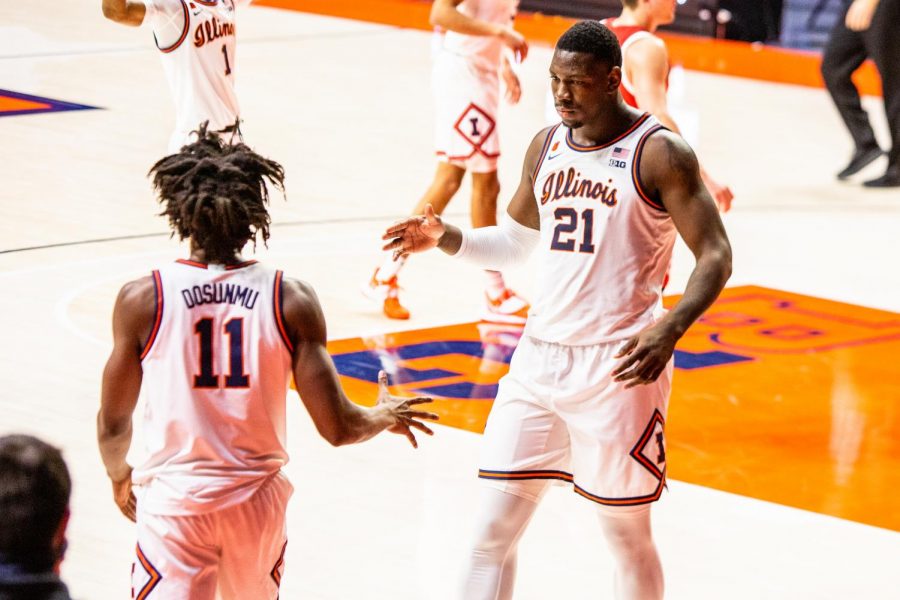 Sophomore Kofi Cockburn and Junior Ayo Dosunmu prepare for an embrace during the game against Wisconsin on Feb. 6 . Both Cockburn and Dosunmu must soon decide whether to declare for the NBA draft or return to Illinois for another season.

Once the final buzzer sounded at Bankers Life Fieldhouse and Illinois’ magical season came to a close, a dark reality set in for Illinois fans. That may have been the last time Ayo Dosunmu and Kofi Cockburn put on the Illinois jersey.

After impressive seasons resulted in a multitude of accolades, both Cockburn and Dosunmu have decisions to make about their futures.

Dosunmu’s path is much clearer. He was a projected second-round pick this time a year ago, and many assumed he would turn pro. Dosunmu, surprisingly, elected to return for his junior season for unfinished business, and he’s done everything in his power to turn himself into a potential first-round pick. His scoring took a leap, averaging over 20 points per game on a career-high 48.8% shooting from the field and 38% from deep, a noticeable improvement from the previous season.

Dosunmu also showed progress as a passer, getting up to over five assists per game and making some impressive reads as a lead ball handler. Between four mainstream boards — ESPN, Sports Illustrated, Bleacher Report and The Athletic — Dosunmu’s average draft position is 29, putting him squarely in the first round discussion. Brad Underwood knows as much and truly believes Dosunmu’s time in Champaign is over.

“Ayo needs to go to the draft,” Underwood said in late February. “There’s nothing else he needs to accomplish in college basketball that I’m going to do for him. He’s turned himself into that guy.”

Cockburn’s decision, meanwhile, appears murky. After testing the waters last off-season, Cockburn returned for his sophomore year and was wildly productive, scoring 17.7 points per game on 65% shooting. Despite the productivity, Cockburn is not seen as a bonafide NBA player. He’s unranked on every mainstream board, except The Athletic’s, which has him at No. 87.

While Cockburn showed he can score inside, there are still holes to his game holding him back from the next level. His passing was subpar, having just five assists on the season to 54 turnovers. His free-throw shooting declined, showing no inclination he’ll ever be a passable shooter. While he made improvements defensively, he still had lapses against more dynamic offenses that ran actions at him, like Baylor and Loyola.

With limited NBA interest, it appears returning would be in his best interest. But there’s certainly a case to leave. The fact that he tested last year is a good indicator he has the next level on his mind. If he does return, it may be hard to improve on the production from this season without Dosunmu drawing so much defensive attention. Even if he is more productive, he’d have to improve those areas of weakness, which may not be as fixable, and his stock could stagnate. He’s also already the age of a junior and may just want to start collecting paychecks, even if it is a two-way or G-League contract.

The case for returning is also clear. Cockburn would easily be a preseason All-American and potentially the Big Ten Preseason Player of the Year. If he can go for over 20 points, 10 rebounds and two blocks per game, while also improving his passing and free-throw shooting, then that sheer production may be hard for NBA teams to overlook.

With Adam Miller entering the transfer portal, Cockburn’s decision becomes even more important to the success of Illinois next season. With him, it’s likely Underwood will have a ranked team in the preseason again. Without him, the ceiling of this team is lowered significantly. While there are capable starting bigs in the transfer portal, none are at Cockburn’s level.

Ultimately, Cockburn’s decision is his own, and whatever he deems best for himself is probably the correct decision. Until then, Illinois fans will have to sit and wait like they did last summer.