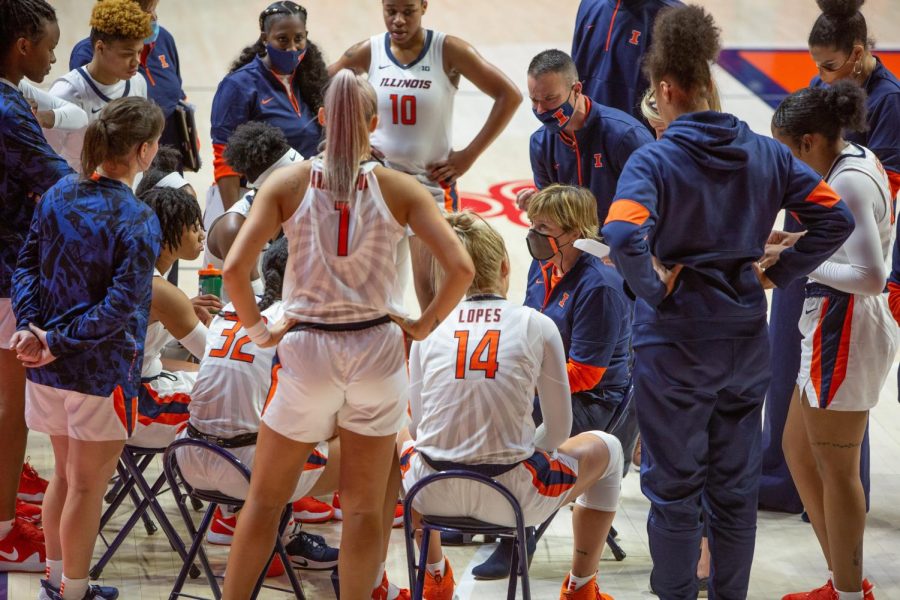 Head women’s basketball coach Nancy Fahey talks to her team during a timeout in a game against Valparaiso on Dec. 2. The NCAA has been failing to equally support women’s sports compared to men’s sports.

Guess what – this shows up in sports, too. In professional sports, the U.S. women’s soccer team’s fight for equal pay has been well-documented, but they aren’t the only athletes receiving unequal pay for equal work. Women’s National Basketball Association players make a fraction of what NBA players make. NBA players often earn one million dollars or more, while the highest-paid WNBA players don’t even make a quarter of that.

The lowest-paid NBA player in 2020, according to ESPN, was Jimmer Fredette, who made $208,500, and it’s worth noting Fredette has been out of the NBA for a couple years.

The highest-paid WNBA player made $215,000 in 2020, according to Insider. And that’s after a $100,000 increase following a collective bargaining agreement. Read that again.

The highest-paid WNBA player made $6,500 more than the lowest-paid NBA player, who, for the record, hasn’t been in the NBA for almost two years. Take a moment to let that sink in.

But it’s not just professional sports. Many of the same systemic issues evident in professional sports trickle down and exist at the collegiate level. Student athletes are not even compensated for their work, and despite a pending Supreme Court case on the issue, women have largely been excluded and left out of the conversation during this process.

This gender disparity is so systemic in sports, even something as simple as trying to find information about the men’s and women’s NCAA tournaments reflects the bias.

Google “NCAA tournament.” What are the search results that appear?

And that’s neither accidental nor coincidental.

Women’s basketball does not get the attention it deserves, particularly during the month of March. The gender discrepancy has been highlighted on social media in recent weeks, with the men’s teams getting better tournament swag, fitness room equipment and access to COVID-19 testing. The women’s tournament is using antigen testing, which is referred to as “rapid testing” and results are less reliable, while the men’s tournament uses polymerase chain reaction testing, which is widely considered the “gold standard” of COVID-19 testing and much more accurate. Experts prefer PCR testing, per USA Today.

The two Twitter accounts hardly scratch the surface when it comes to these gender discrepancies. NCAA schools simply don’t invest equally in women’s sports. And the NCAA has to clean its own mess before it tells anyone else how to spend their money; it’s admitted it spends twice as much on the men’s tournament as it does on the women’s. The NCAA also announced it is hiring a law firm to investigate gender discrepancies in its programming.

I’d say that’s a good move, but the problems are so painfully evident at this point that hiring a law firm seems to be solely for show.

NCAA members follow their leadership’s example and don’t equally invest in women’s sports. They might claim to support women’s sports, and Title IX requires them to provide equal opportunity. So while the schools may superficially fulfill their Title IX requirements through the number of teams they field, their finances tell a different story.

It’s far from the first time coaches’ salaries have been inequitable. In 2017, the South Carolina men’s basketball team went to the Final Four, while the women’s basketball team won its tournament. Dawn Staley, the women’s coach, made $1.1 million for the 2015-2016 season, while men’s head coach Frank Martin was paid $2.1 million during the same time frame, the year before both teams went to the Final Four.

This issue extends far beyond the NCAA. And it hits much closer to home than Columbia, South Carolina.

Twitter is maybe the most subtle indicator of where things stand in the Illinois basketball realm. The team handles are perhaps the most egalitarian thing here: The men’s team’s handle is @illinimbb and the women’s team is @illiniwbb. However, the names quietly reflect the gender bias that permeates the basketball world: The men’s name is “Illinois Basketball” and the women’s name is “Illinois W Basketball.”

While Twitter is superficial, a deeper dive into the University’s own data indicates that the men’s basketball team’s expenses are significantly higher than the women’s.

And it’s not like the University is trying that hard to promote women’s basketball. The “Fund Raising, Marketing and Promotion” section of the NCAA report paints perhaps the most stark contrast of all. $53,007 for the men, yet $977 for the women.

For those who think revenues or some other flimsy excuse justifies this lack of investment, that doesn’t fly. The NCAA and its member schools are simply going to have to open their pocketbooks and make the investments needed to get people to support women’s basketball. They don’t seem to spare an expense for men’s basketball.

The NCAA, of course, plays a role in Illinois’ lopsided revenues. Its distributions, according to Illinois’ NCAA report, were $894,568 for the men’s basketball team. The women’s team got $0. And no, that isn’t a typo.

And just for reference, the most recent U.S. Census Bureau data shows the median household income in Illinois is almost $66,000.

The women’s basketball media rights were almost $20,000 less than the median household income of the state it represents. Often, the men’s games air on Big Ten Network, which is fairly easy to access, and the games are on at times when people can easily tune in.

Oftentimes, the women’s basketball games air on Big Ten Network+, which, away from campus wifi, requires a subscription and isn’t as easy to access as the main Big Ten Network channels. The games also air at times when a lot of people have work or class or otherwise can’t tune in. It’s hard to build a following when fans have a hard time watching games.

Don’t get me wrong, Underwood has done a phenomenal job at Illinois, and it costs a pretty penny to have a strong program. But if Illinois athletics officials want Fahey to see similar success, they’re going to have to open their wallet the same way they’ve opened it for Underwood.

Women’s sports can be lucrative, but they just need visibility and resources. Our women’s basketball team can and should be just as successful as the men, but it’s going to take equal investment, both in terms of money and resources, to make that happen.

While Illinois has its own issues, NCAA president Mark Emmert has done nothing to elevate women’s sports. And while he’s out here giving insincere apologies and making excuses, his actions indicate he isn’t interested in bettering women’s sports.

Because he is unwilling to elevate women’s sports, the best thing Emmert can do to strengthen women’s sports is to hand in his resignation, and the NCAA must appoint someone willing to champion women, transgender and non-binary people in sports.

He truly isn’t willing to listen to student athletes, who the NCAA refuses to compensate, and give them the space and opportunity to voice their concerns and advocate for much needed change, so the NCAA needs to find someone who will.

The NCAA needs to stop preaching equality and start working towards it. The world is watching. The ball is in its court.
Its next moves will determine whether that ball drops.