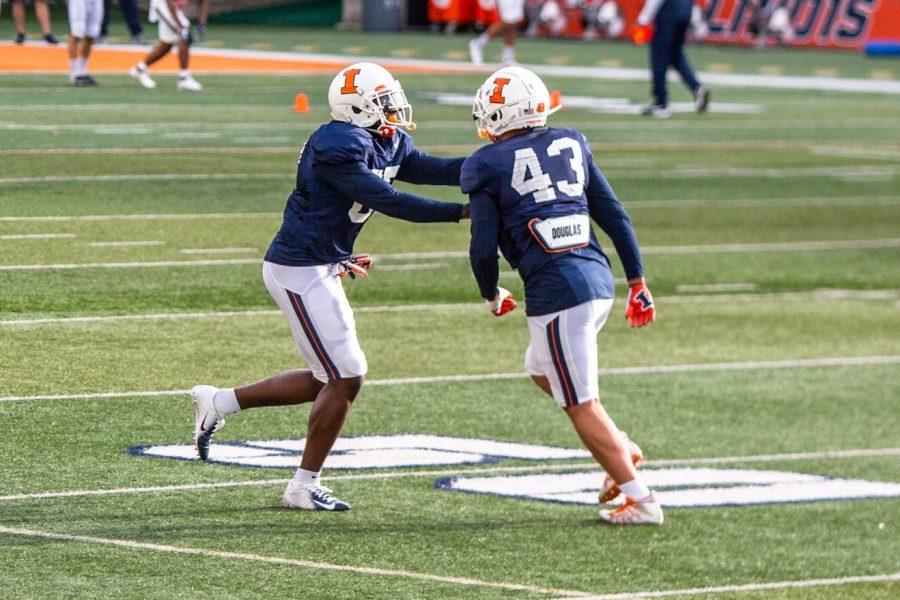 Junior Daniel Barker runs drills during practice on Tuesday morning. Barker, as well as senior Luke Ford, will be important pieces for Bielema’s offense next season.

While Illinois football might be a little thin at the wide receiver position this year, Bret Bielema inherited two talented veteran tight ends to incorporate into his new system: Daniel Barker and Luke Ford. Under Lovie Smith, the Illini tight ends weren’t always utilized as primary offensive weapons. Bielema and tight ends coach Ben Miller intend to change that.
“I think we’re going to use a lot of tight ends,”
Miller said. “You’re going to see guys rotate in and out. You’re going to play inside receiver, outside receiver, unit tight end. We’re going to be in the backfield. We’re going to be doing a bunch of different things that just correlate to being a great blocker, being a great receiver, getting you into open space into green grass against a smaller defender that we can use your talents.
“I’m really excited about what the tight end position is becoming in our offense as we go through this thing together.”
Last season, Barker finished with the second-most receiving yards on the team with 268, right behind former wide receiver Josh Imatorbhebhe. Barker also added two touchdowns in 2020 and was second on the team with four touchdowns in 2019.
Bielema and Miller have both been impressed by Barker’s physical gifts as a 6-foot-4, 250-pound athlete, and because of the potential Bielema sees in the senior, he has pushed Barker even harder through the first couple weeks of practice.
“He’s obviously got talent,” Bielema said. “He’s a big kid who can run; he’s athletic. We had a few moments there last week, but he made a few plays on Tuesday blocking in the run game that really got me excited. We know he can catch the ball, but he doesn’t catch them all. If you’re going to preach about being a dynamic receiving tight end, well, let’s be the dynamic receiving tight end. Let’s not talk about it, let’s be about it. I’ve probably been as aggressive on DJ as anybody on the roster. He’s responded very, very well. I think the two of us can continue to grow, and he can grow in this offense.”
Ford, on the other hand, started just twice last season — his first season of eligibility with the Illini — and caught just two passes for 15 yards. With Ford being a former four-star recruit, many expected him to be a major producer for Illinois in 2020 after transferring from Georgia .
While that wasn’t the case under Smith, Bielema has a special history with Ford that will likely change how the tight end is used this season. When Bielema was the head coach at Arkansas, Ford verbally committed to play for the Razorbacks in 2017 but later pulled his commitment in favor of the Bulldogs program, where he spent just one semester.
So, when Bielema took a dive into the Illinois roster after an initial conversation about the job with athletic director Josh Whitman, he saw Ford’s name and gave a chuckle, thinking about the possibility of finally coaching Ford.
“I was kind of shocked when I went to the Penn State game (last December), and I didn’t see him on the field all that much,” Bielema said. “I think there are a variety of different reasons why that may or may not have happened, so he and I had a good conversation. I think the guy who maybe has impressed me the most from Saturday to Tuesday when we put the pads on truly might be Luke. He’s straining. He’s competing. He made a couple great catches.
“He’ll be the first to tell you I had a couple coaching moments the other day. But I’m going to tell you, physically, height, weight, ability, more than intelligent enough, more than capable of making something really special happen. I really, really hope it happens. He’s got great parents, great people, obviously a local kid that hasn’t been able to achieve the success that everybody thought he would at some point, but I’m betting on the kid. I think he’s really got a bright future hopefully.” Bielema said.
Ford and Barker will likely be the primary tight ends this year, but Miller also gave a nod to walk-on Tip Reiman, complimenting his attitude and size. As far as backups, Miller will also have redshirt sophomore Griffin Moore and Michigan State transfer Max Rosenthal, who won’t be on campus until the summer.
While Miller and Bielema see great potential at the tight end position long term, Miller has been focused on the new learning experience with his current guys.
“Those guys are moving around a lot,” Miller said. “We’re getting them a lot of different looks, and those guys have to be smart players rather than just memorizers. They’ve gotta be physical, be good receivers. It’s been a lot of fun coaching them and getting through the initial ins and outs of the playbook.”