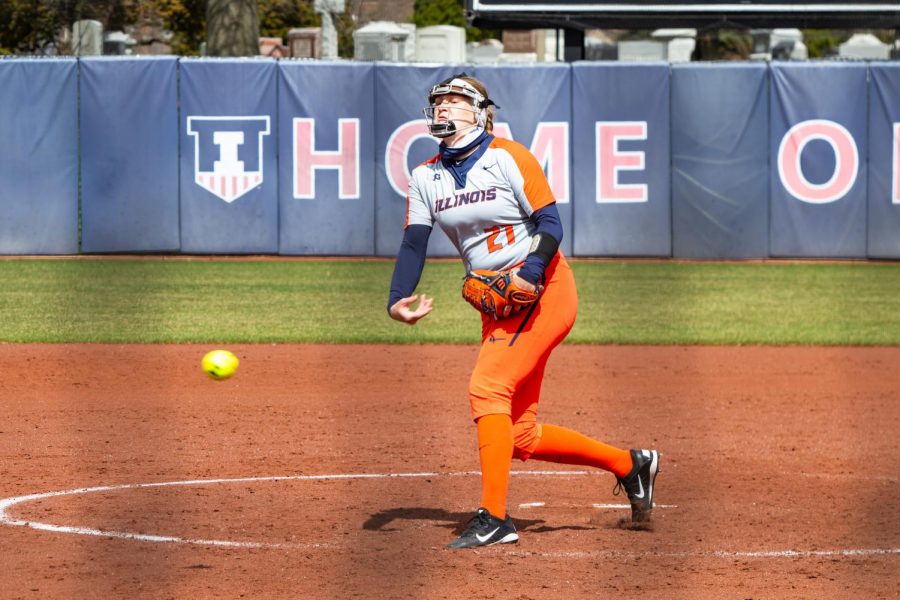 Junior Sydney Sickels pitched during a game against Minnesota on March 28. The Illinois softball team just returned from Madison, Wisconsin with a 3-1 series win against the Badgers.

After a four-game series with the Badgers, the Illini returned from Madison, Wisconsin with a 3-1 series win, boosting their overall record to 14-6.

Illinois has dropped two rankings in the Big Ten Conference, now fourth behind Northwestern, Michigan and Minnesota. Despite this, the Illini are determined to progress with their competitive excellence. As Illinois advances, they’re continuously setting new season highs.

“We are the toughest team in the Big Ten,” said junior Kailee Powell. “It’s all about our minds and our bodies working together. We work on mental toughness every day in practice and keeping ourselves straightforward.”

Each Illini brings their individual skills, techniques and mindsets together, contributing to the powerhouse they are today. They work on building themselves physically and mentally to the point that they’re able to lean on each other in times of need. Illinois has created such a dynamic and confident team, and adversity is a part of their culture — being able to find that motivation to overcome any difficulty.

Each day, the Illini work together to gain the motivation to walk into any series with their “no-fear mentality.” It’s about taking each day one step at a time, finding that momentum and running with it. In creating this courageous and encouraging space, Illinois is able to develop a confidence like no other.

“We talk a lot about our team being a young team; most of our lineup is filled with sophomores and juniors,” Powell said. “I think a lot of people take us for granted in seeing us as an underdog, but we kind of like being seen like that. We know that we got each other, and we don’t need validity from other teams.”

Illinois works as a coherent unit to find that personal drive within themselves. With each and every one of their potential capabilities, the Illini walk into a series prepared for whatever is thrown their way, making sure that with every unexpected play comes a diligent catch.

Instinctively, the team produces great efforts to win each series they come across. Though, as straightforward as life can be, it can always throw an unexpected curveball.

“We realized that we can never just take a team for granted,” Powell said. “We can’t just expect to win just because we’ve been doing well in the past. In other words, just less of expecting to win and more so working to win.”

This weekend’s series against Wisconsin was the first true Big Ten road series for Illinois since April 28, 2019 at Ohio State. The Illini’s pitching, hitting and fielding were on fire during the series.

On Friday afternoon, the Illini shut out the Badgers, 4-0, scoring four runs on six hits all during the top of the sixth inning. Junior pitcher Sydney Sickels threw her seventh complete game and racked up a season-high of 12 strikeouts. The game was scoreless until senior Katie Wingerter got on base on an error to lead off the top of the sixth. Wingerter set the offensive tone, following an RBI triple by junior Avrey Steiner to center field and a perfect squeeze bunt by Powell.

“It’s nice seeing all the success, but it’s also noticing that we’re not going to be satisfied with it,” Powell said.

Saturday’s doubleheader only motivated the team even more, as they played as a cohesive unit, winning the first game 7-2 and losing the second, 2-1. During game one, the offense scored seven runs on a season-high 16 hits. Sophomore Delaney Rummell went 3-for-4, while Wingerter, Steiner, senior Bella Loya, sophomore Kelly Ryono and redshirt freshman Jaelyn Vickery all added two-hit games for the Illini.

As the four-game series came to an end Sunday, Illinois defeated Wisconsin 3-0. The team found momentum and dominated on the mound and at the plate. Steiner led the Illini offensively, going 2-for-4. Powell, Vickery and Rummell each had RBIs in the win. Wingerter hit her second home run of the season in the Illini win.

Sickels was triumphant once again, tying her season-high 12 strikeouts while allowing just one hit. She improves to 8-2 on the season with a 0.68 ERA. Sickels threw her second one-hit complete game shutout of the season.

“I definitely like knowing that we can show up to any series, play any team,” Powell said. “Even in an inning where we’re down 6-0, knowing that our team can come back and win because we are that good.”