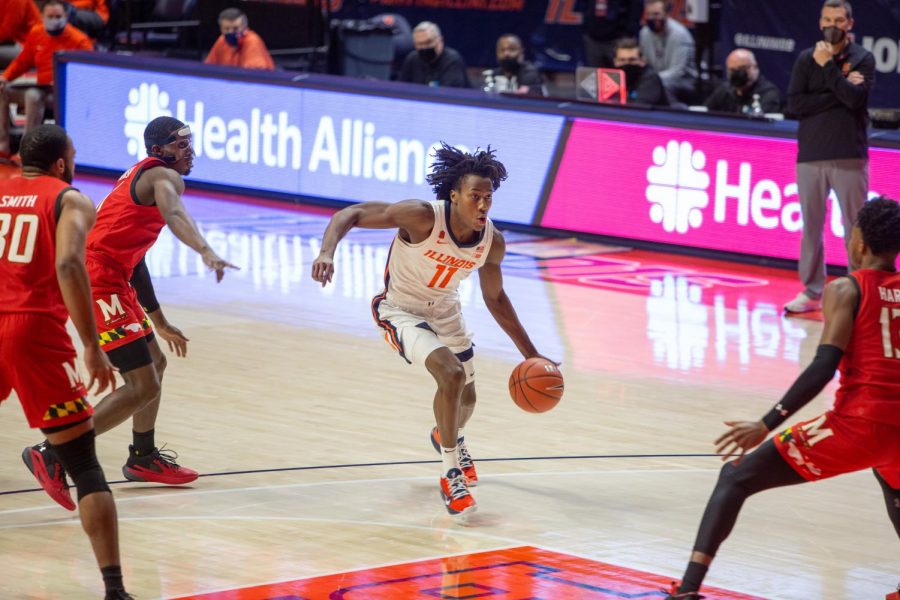 Ayo Dosunmu drives to the lane during Illinois’ game against Maryland Jan. 10. Dosunmu declared for the 2021 NBA Draft Tuesday afternoon.

For the second consecutive season, junior Ayo Dosunmu has declared for the NBA Draft, he announced Tuesday afternoon on ESPN’s “The Jump.” Though it seemed like he was a sure bet to leave last season, the Chicago native’s time in Champaign is now certainly over.

Dosunmu averaged 20.1 points, 6.3 rebounds and 5.3 assists per game last season, which were all significant improvements from his freshman and sophomore campaigns.

He also won several accolades, including, most recently, the Bob Cousy Award, which is given to the nation’s top college point guard. Dosunmu was a consensus All-American, and he became the first Illini in program history to be named to the Associated Press’ first team.

Though Dosunmu won’t take the court again as an Illinois player, his name and number will deservedly hang in the rafters at State Farm Center following a historic collegiate career.

Dosunmu announced he has hired an agent and is currently projected as a mid-first round pick. The 2021 NBA Draft is scheduled for July 29.