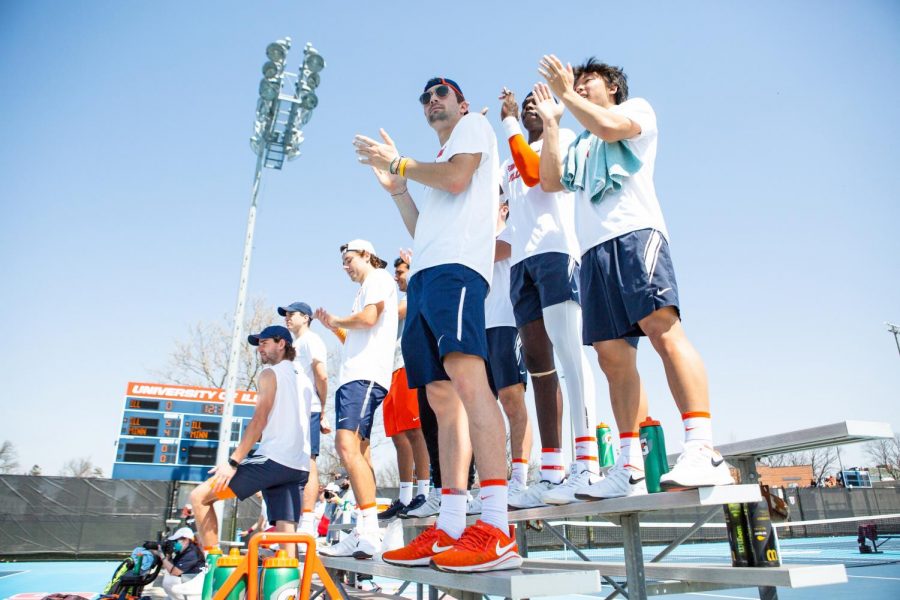 The Illinois men’s tennis team cheers on their teammates from the bleachers in their singles matches against Minnesota on Sunday at Atkins Tennis Center. Illinois athletics teams have been working hard to beat their competition this season.

Despite losing last weekend’s series to Nebraska, the Illinois baseball team has had a fairly solid start to the season. Sitting at 8-10, the Illini have only one series win, though they did pick up victories over then-No. 23 Ohio State and then-No. 13 Michigan.

Sophomore Branden Comia has been off to a hot start this season, hitting .403 throughout the first 18 games, while senior Jackson Raper leads the team in home runs with six. On the mound, sophomore Nathan Lavender looks like an ace, as he has a 1.13 earned run average and a 3-0 record.

The Illini are 6-4-1 and enter the playoffs with momentum, as they are coming off back-to-back 2-1 road wins. Both games went down to the wire, with a 84th-minute Makena Silber goal against Michigan State and an 89th-minute Kendra Pasquale goal against Northwestern, the deciding factors in the two wins.

Pasquale leads the Illini with a career-high five goals, tied for third most in the Big Ten, while senior Sami Sample has been a wall in goal, starting all 11 games thus far with 10 goals allowed. Silber also leads the conference in game-winning goals with three.

5-seed Illinois hosts Iowa in the first round of the Big Ten Tournament Thursday at Demirjian Park, with the winner advancing to face either Nebraska or Minnesota.

Following a hot start to the season in Florida, where the Illini went 10-2 and swept three of their five opponents, the team has cooled off slightly, though they won three of four against Wisconsin last weekend.

Illinois is getting production at the plate and on the mound, as juniors Avrey Steiner and Kailee Powell are leading the team with batting averages of .425 and .407, respectively. Powell also leads the team in runs batted in (15) and doubles (6), while Steiner leads in the Big Ten in hits with 31. On the mound, junior Sydney Sickels has the conference’s second-lowest earned run average (0.68) and the second-most wins (8) and strikeouts (89), while junior Addy Jarvis has a 1.68 ERA and 4-1 record.

Sickels also notched the program’s 14th no-hitter against Penn State March 13. The 14-6 Illini, who sit fourth in the Big Ten standings, will travel to Lincoln, Nebraska, to take on the 11-9 Cornhuskers Friday.

Though the Illini struggled in the first half of the season, which included a 10-match losing streak, the volleyball team bounced back and closed the season on a high note, winning five of six, including an upset win at No. 8 Purdue.

Last weekend, the Illini fell in the first match against the Boilermakers in three straight sets, though Saturday’s match was more successful for the team. After going down 2-1, Illinois roared back in the fourth and fifth sets to secure its first win over a ranked opponent this season.

Junior Taylor Kuper was named the conference’s Defensive Player of the Week after making 47 digs and 12 assists over the weekend. Illinois wraps up its regular-season campaign with a disappointing 7-11 record.

After winning their first three tournaments of the year, the Illini men’s golf team has regressed a bit in their two most recent tournaments, finishing tied for fifth of 18 teams in the National Invitational Tournament in Tucson, Arizona, March 21, while placing fourth in the Augusta Haskins Award Invitational in Augusta, Georgia, Sunday.

After competing across the southern United States to open the season, the Illini will return to the Midwest Saturday for the Boilermaker Invitational in West Lafayette, Indiana.

The Illini women’s golf team hasn’t competed since March 28, where it finished fifth of 18 teams in the Clemson Invitational in Sunset, South Carolina, though senior Tristyn Nowlin finished in 51st place at the Augusta National Women’s Amateur Thursday.

Nowlin narrowly missed the cut to advance to day three of the tournament, as she finished +11 across two rounds of play.

Illinois returns to competition April 17 for the Indiana Invitational in Bloomington, with the Big Ten Championship scheduled for the week after.

The Illini men’s gymnastics team entered last weekend’s Big Ten Championships with a 4-3 regular-season record. Despite several gymnasts out with various injuries, Illinois finished in fourth place in the competition.

Junior Michael Fletcher was named to the All-Big Ten First-Team after taking home the vault title with a score of 14.600, while junior Ian Skirkey and sophomore Connor McCool made the All-Big Ten Second-Team after they finished second in pommel horse and floor, respectively.

Illinois is now preparing for the NCAA Championships, which go underway April 16 in Minneapolis, Minnesota.

Arguably the hottest Illinois squad at the moment, the Illini men’s tennis team is 14-2 and currently on a 10-match winning streak. Yet to lose a match since Feb. 21, Illinois sits atop the Big Ten West standings with a 9-1 conference record.

Senior Zeke Clark has been unbelievably dominant thus far, as he is 12-0 in singles play and 10-0 in doubles play, with nine of those wins coming alongside redshirt partner and junior Alex Brown. Redshirt sophomore Siphosothando Montsi started the season off hot, starting 12-0 in singles play before falling in straight sets to Minnesota’s Jackson Allen Sunday.

Despite sitting at 6-7, the Illinois women’s tennis team has looked solid lately after starting the season 0-4. The Illini have grinded out narrow 4-3 wins four times this season, with three impressive underclassmen leading the way.

After not competing last weekend, Illinois returns to action Friday with a home showdown against Michigan State before traveling to West Lafayette to take on Purdue Sunday.

In the men’s track team’s first outdoor meet of the season March 27, sophomore Shrey Chowdhary finished second in javelin throw with a distance of 190-4 feet in his first college meet, while the men’s 4×100-meter relay consisting of junior Bret Dannis, redshirt senior Josh Eiker, senior Jason Shannon and junior Declan Rustay finished in third place with a time of 40.27 seconds.

The team will travel to Bloomington, Indiana, Friday for the second Big Ten Invitational of the season.

In the first outdoor meet of the season March 27, several Illini etched their names into the history books; sophomore Jess Streepy and redshirt junior Alyssa Morello moved into a tie for seventh place in school history in the pole vault with a height of 12-7.5 feet. The 4×100-meter relay team composed of graduate student Felicia Phillips, sophomores Jessica McDowell and Jeanea Epps and senior Ololade Ayoola, who took third place at the meet with a time of 46.97 seconds.

Like the men’s team, the women will also travel to Bloomington, Indiana, Friday for the second Big Ten Invitational.