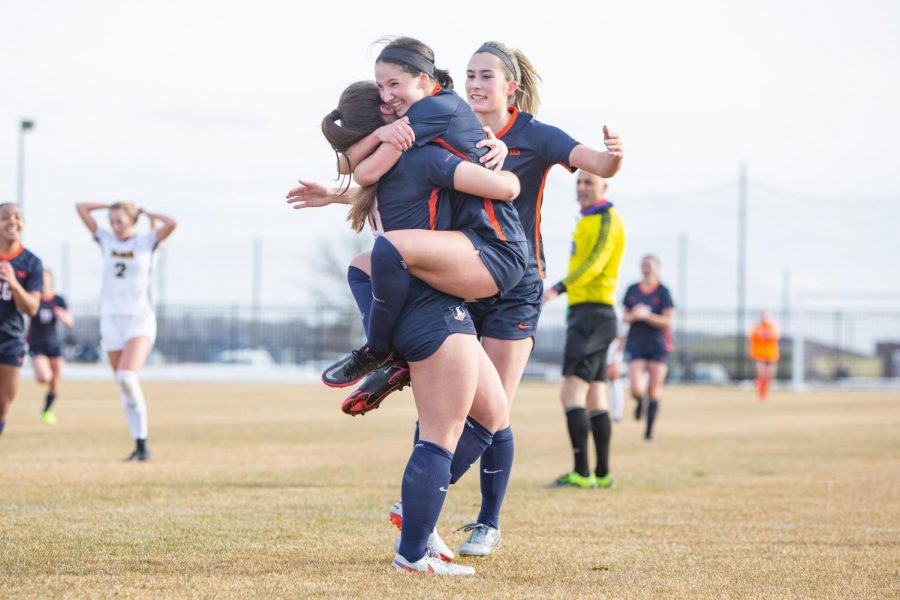 Redshirt sophomore Kendra Pasquale celebrates after scoring against Iowa at Demirjian Park Feb. 25. The Illini face the Hawkeyes in the first round of the Big Ten Tournament Thursday.

On Thursday, the Big Ten Tournament will kick off single-elimination games over the course of two weekends.

How the tournament will work

Unlike past years when only eight teams would earn berths to the tournament, all fourteen teams have been invited this year and are split into an East and West Region based on divisional alignment used during the Big Ten season.

Prior to the start of the campaign, the weekend of April 8-11 was deemed “Big Ten Wildcard Weekend,” where each team would play one or two non-conference games against Big Ten opponents.

The Wildcard Weekend has now turned into the regional weekend for the Big Ten Tournament, taking place the same weekend.

Thursday will be the first round of regional play for all fourteen teams. The winners from the five games will move onto Sunday, when the first weekend will wrap up. The four teams who have won at Penn State, Ohio State, Illinois and Wisconsin will then move on to the following Thursday, April 15, to battle in the semi-finals. April 18 is the championship game, and the winner will be crowned the champion.

What does the tournament look for Illinois

The No. 2 seed will face off on Thursday at Demirjian Park against No. 7 Iowa. This week marks a historic one for the Illinois’ soccer and track & field programs and the Illinois athletics program as a whole.

On Tuesday, Demirjian Park had its official grand opening. Ever since ground broke, the team has seen it grow and evolve around them into what it is now. The team can now call Demirjian Park their new home, and head coach Janet Rayfield calls it the best soccer facility in the Big Ten.

“There’s this real synergistic feeling of excellence that building has created in both of those programs that I think is program-changing, life-changing for all of us,” Rayfield said.

Demirjian Park will be the site of two games Thursday, hosting Nebraska versus Minnesota, in addition to the Illinois game.

The last time the Illini made it into the Big Ten Tournament was in 2018, when they advanced all the way to the semi-finals only to lose to Penn State 1-0.

The Illini and the Hawkeyes will face each other for the second time this season. The two teams last met Feb. 25 in Champaign, where Illinois was victorious and towered over Iowa 3-0 with goals from Kendra Pasquale (2) and Summer Garrison (1).

Iowa finished its campaign 12th in the Big Ten with a record of 2-8-1. Illinois finished tied for fifth with Indiana after getting an average of 1.73 points per game and a record of 6-4-1.

Illinois heads into the game with a lot of firepower and momentum under its belt. Pasquale has emerged as one of the best on the field. The speedy left midfielder is the team’s leading goalscorer (5) and has contributed in the last two games, giving the gam-winning assist against Michigan State and scoring the game-winning goal against Northwestern.

While Pasquale might be the frontrunner on the team, the Big Ten Tournament always leaves the possibility for someone unexpected to help out and make an impact on the field.

With the tournament being one and done, Illinois has a strong mentality going into Thursday.

“I think this team is confident, but, more importantly, proud of who they’ve become and the resilience that they have shown through this challenging year and even through some of the challenging games,” Rayfield said.

Following behind Pasquale will be Makena Silber, who has nabbed several game-winning goals herself, Eileen Murphy, who has become a threat on free kicks and corners with her head, and a solid goalkeeper and defense, who are really going to have to step up if they want to prevent goals.

Illinois missed its crafty midfielder, Hope Breslin, who sat out the Northwestern game to fully rest her ankle after getting a knock on it against Michigan. If Breslin does come back in the starting line up or as a substitute, she is sure to make an immediate impact, as she has the ability to control the ball and start the attack.

Breslin went through diagnostic tests Wednesday morning, so the coaching staff will learn later in the day if she could be available to play Thursday.

Looking at Iowa, after the 3-0 loss at Demirjian Park, it endured a rough run to their season, losing six more games, drawing one and only earned two wins against Maryland and Purdue.

The Hawkeyes were only able to score three goals the entire season, making them the lowest-scoring team in the Big Ten.

While Iowa lost back in February, it will be seeking revenge on Illinois to make an upset during the regional weekend.

“Iowa has improved from that point,” Rayfield said, referring to the loss to Illinois. “I expect this to be a battle. Iowa has been really stingy in terms of giving up shots, and they’ve gotten lots of opportunities. They haven’t finished those opportunities, but I told my team yesterday, ‘That’s a change that can flip in an instant, so we have got to be really ready defensively.’”

If Illinois wins against Iowa, it will move on to Sunday to take on the winner of the Minnesota versus Nebraska game in Champaign.

The game will kick off at 7 p.m. central time and will be streamed on Big Ten Network+.