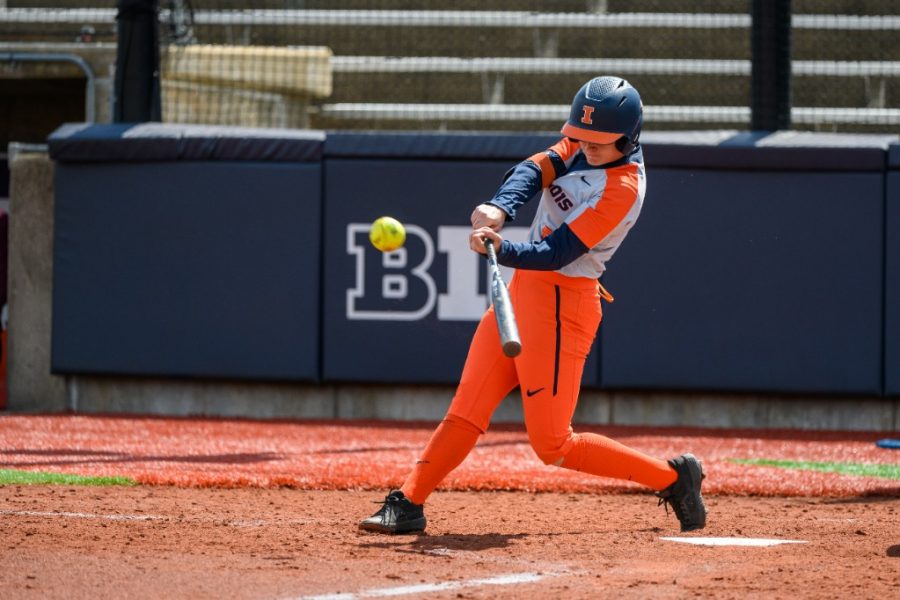 Junior Kailee Powell swings at the ball during their game against Minnesota March 28. Powell has a diverse tool set, as she has played almost every position at some point in her softball career.

Softball is a game, and like all games, they aren’t going to last forever. In any game of life, there are always going to be different perspectives, unexpected plays and obstacles to overcome to reach success.

Powell came to Illinois with limited experience, as she had played mostly first base in high school, but Illinois saw way more potential. She played outfield since she was nine, so the transition from the infield to the outfield took some adjustment. Yet, with her teammates by her side, her passion and drive for the sport and her determination to overcome any obstacle, she was able to use the different aspects of each position to her advantage.

“It’s really nice to see that even though the outfield and infield are two completely different positions, no matter where I play my team is always going to have my back, even if I’m struggling,” Powell said.

There will always be highs and lows in any player’s career. Powell faced many challenges that she had to overcome, creating a deeper attachment to the game while also enhancing her love for the sport. There was a period during the fall season where she was struggling with personal health issues, forcing her to take time off and miss practices with her teammates.

“There was really a wall where I didn’t know which way was up or down,” Powell said. “In order for myself to get out of that slump, I had to absolutely rely on my team. I had to show up to practice with the ultimate intent of just having fun and being happy. It’s really just finding your love for the game and making sure that I’m the teammate I would want to be there for me.”

Each position player knows the role they bring to the team, what they need to do to win and how they’re going to produce these results. To play the game, it is imperative to make every moment count.

“We all have different roles as a team,” Powell said. “It’s nice to see that all these different motivations and roles can come together to bring our team a win.”

In any game, there will be a sense of expectation. Powell looks at every practice, weight room session and game as an opportunity to help her team and vice versa. The Canyon Country, California, native doesn’t let expectations define her, as she strives to be the best player and teammate she can possibly be.

As the team progresses through the season, there is one goal: winning the Big Ten Championship. Powell says the team can accomplish that goal with quality at-bats and error-free fielding.

“I knew going into this season, our team was something special,” Powell said. “Adversity is a part of our culture, in terms of overcoming it. We’re not just going out as if this is another season. We know that a season can get cut short, and we’re not going to let this one get away from us.”

In the first doubleheader of the season, she went 3-for-4 with a home run, three RBIs and two runs scored in game two against Rutgers. Her effort to assist her teammates doesn’t stop there. Their last game against Wisconsin, Powell laid down a perfect bunt squeeze. Her hitting range is diverse, as she can hit home runs and lay down bunts.

Games don’t last forever, and at some point one must realize that your life shouldn’t hinge on one game. Over the years, Powell acknowledges that within this game of failure, it is easy for one to lose sight of the love for the sport.

“This sport has brought me so many things that I am absolutely grateful for and given me opportunities that I could only dream of having,” Powell said. “But it’s really easy in this game of failure to lose your love for the game.”

Nevertheless, she persisted. Through thick and thin, with her parents and teammates by her side, she persevered and continued to conquer the mental and physical obstacles thrown her way.

“Softball is something to be played as a game and not as a job,” Powell said. “For me, that’s my number one priority, to just have fun. And if you have enough fun and keep that positive atmosphere around you, the outcomes will come your way.”