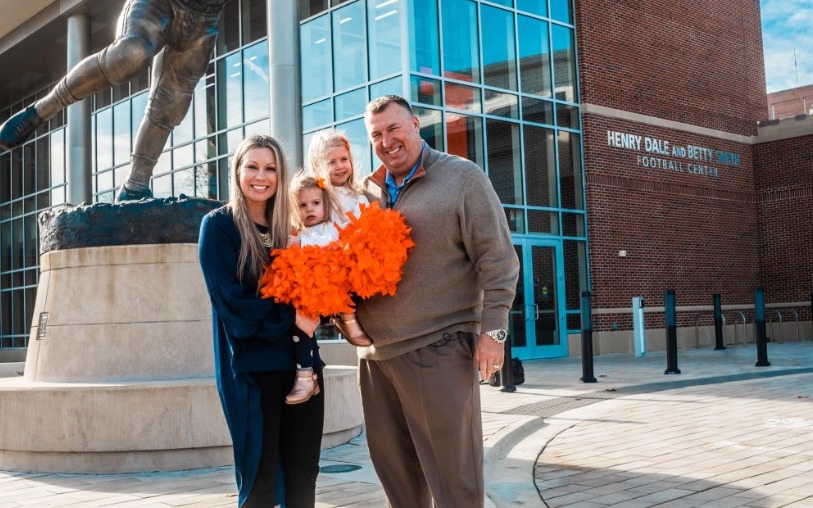 Illinois head football coach Bret Bielema and his wife Jen Bielema pose for a photo with their daughters Briella and Brexli in front of the Henry Dale and Betty Smith Football Center on Dec. 12. The Bielema family hopes to reside in Champaign for a long time.

Bret Bielema had been planning a March 26 reunion with his wife, Jen, and young daughters, Briella and Brexli, for months. Not seeing his family since a short stay in New Jersey for Christmas, Bret hoped to hop on a plane by 7 a.m. and take a two-hour flight out to his family’s rental home just to bring them right back to Champaign, so he could be with his family for good.
But a few weeks back, Bret received an email that he had to attend a Zoom meeting that morning with all the Big Ten head football coaches. A small wrench had been thrown in his plan and waiting to hold Briella and Brexli, hear their giggles and see their smiles was more than just a minor inconvenience.
But Bret and Jen are used to plans changing on a limb. In fact, their entire relationship has revolved around changes much bigger than a two-hour flight delay. The two met when Bret still coached at Wisconsin, so Jen made moves with him to Arkansas, then New England, then New York and now, Champaign.
So naturally, Bret adapted, pushed back his flight a couple hours and was warmly welcomed by his family in Jersey late morning.
“Oh, I should have gotten it on camera,” Jen said. “I was just so excited to see him too.” The dogs were barking because (the girls) were screaming, ‘Daddy, Daddy;’ And my oldest, she’s totally a daddy’s girl. And she just embraced him. And he embraced her. And then he had both girls. Like it’s a memory I will remember, but I so wish that I got at least a photo or video of it would have been best. But it was a special moment for all of us.”
After the initial excitement of reuniting with her husband, Jen finished packing up her rental home that her, the kids and sometimes Bret occupied for a short nine months. In the meantime, Bret stayed out of the way, letting Jen do her supermom duties while entertaining the girls.
“The (kids) were running all around, screaming and yelling,” Bret said. “They had on their Illini outfits. It was funny because we were about ready to get on the plane, and Jen was doing some last-minute things with the house and putting the car seats in the car service. So I was having them play tag inside the house because the house was
totally empty, and they’ve never been able to run the length of the house, so they were excited. It was fun.”
Those little moments of fun Bret gets to share with his girls are so precious to a father who has such limited time with his family. From the pandemic, which forced Bret into a six-week quarantine with the Giants at the end of July, to the coaching change in December, Bret has spent about half his time in the past year in a hotel or on a plane.

Even in a normal year, the rigorous time commitment it takes to be a pro or collegiate football coach keeps Bret away from his wife and kids more than any of them like. And with the Bielema girls getting older now, the recent move has been the hardest on the family.
“My oldest, she’s three, and she definitely is asking for Daddy more,” Jen said. “So that broke my heart a lot during our time away, because I could see it sometimes in the car. I’m like, ‘Baby, what’s wrong?’ She’s like, ‘I miss Daddy and want to see Daddy.’ And that’s when it’s just like, she knows. She can sense it. And it’s the first time in any of our moves, that she’s been able to speak her emotions of missing Daddy.
“That probably tears my heart the hardest when I can just see it on her. And then she said that, it almost brings tears to my eyes now because I saw it a lot in these last three months, especially in the last month.”
Back in New Jersey, the girls were in preschool, which kept them occupied during the day and let Jen focus on the move, but after school got out, FaceTimes or phone calls to Bret were a constant. The family “lived vicariously” through them. Jen would sometimes give Bret a call on the way to or from school, during dinner, bath times or before bed, just so the girls could feel connected to their father.
With Jen, Briella and Brexli now in Champaign for good, those interactions through the phone have finally ended. Because spring football at Illinois is underway, Bret is still
mainly occupied by work, but he can now be a part of dinner conversations, read bedtime stories and even help with preschool pick ups every so often.
But with the girls being so young, there’s still a layer of confusion and doubt that their father isn’t here to stay.
“(Sunday) I had them all morning, then we were going to leave the offices,” Bret said. “My youngest, Brexli, was like, ‘Daddy, are you coming with?’ We came back to my hotel for a minute, then tonight when we were putting them down, I had to come back to the office and make some recruiting calls. And they were like, ‘When will I see you again?’ and I’m like, ‘I’m here, baby, I’m with you. You’ll see me every day.’ So every time I’m leaving them they think I’m leaving for a long time.”

It’s no secret Bret is an emotional man when it comes to his family. Illinois fans and followers witnessed that when tears were shed during his introductory press conference while Bret discussed his wife and kids.
While Bret is comfortable showing that side of himself to the media, or team or Jen, it’s something he keeps from Briella and Brexli. Whenever he has to say goodbye to them, he typically finds a way to sneak out of the house to shed those tears in private. He would never want to make his girls more upset.
But Jen always sees that side of Bret, a side that has evolved throughout their marriage as the couple has watched their kids begin to grow up. Seeing Bret and the girls together, playing games or doing daddy-daughter date night or hanging out in the office has brought Jen a much-needed sense of comfort.

“My husband’s definitely a very sentimental, sensitive guy,” Jen said. “He really cares. He loves his girls, as daddies do, but he misses them, and he really misses them hard when he misses them because he knows he doesn’t get to necessarily be there for everything. If he could be in two places at once, I know that he would love that, as many of us would. But he loves his girls, and they love him back hard, so I know just us all being in the same town is just nice. It feels like we’re home again. It’s just felt like we’ve been this broken house, if you will, because he was in Champaign, and we were there.”
Champaign is a new home for both Bret and Jen, but there’s a sense of “familiarity” with the town. The Bielemas are now just a couple hours away from Prophetstown, Bret’s hometown, and Chicago, the city where Jen and Bret had their first official date. Being back in the Midwest, the heart of the Big Ten, is also a familiar feel for the couple.
But most importantly, Champaign feels like the Bielemas’ forever home. While they’re staying in a rental home for now, they are building a brand new house close to campus.
“Illinois was special for us, because we are back in the Big Ten, and we love the Big Ten,” Jen said. “We’re close to home. It’s like the perfect world for us, which is why we’re building and really hoping to plant forever roots here. And this isn’t a stepping stone for us. We love college football. The NFL is great, too. We just love football. But we’re thrilled to be back in the Big Ten, thrilled to be back in college football and all of what that entails.”
Dedicated to making this his family’s home for potentially decades to come, Bret designed an entire wing dedicated to recruiting visits and remote work, featuring the “Illini Way,” which will include some of his football memorabilia, like Big Ten and Lombardi trophies.
While no head coach has spent a decade or more at Illinois since Ray Elliot from 1942-1959, Bielema wants to rewrite history, and Jen has luckily always been on board.
“When we were designing the house, we were talking about the number of cars to fit in the garage. And (Jen) said we’ll have to have room for the (girls’) cars and I’m like, ‘Jen, she’s three, we have 13 years.’ But it’s exactly where both of our minds are. I started laughing because I was thinking the same thing.”
Though the longterm move into the new house won’t be for about a year, Bret and Jen are just excited to start sharing the little moments together with Briella and Brexli, along with getting to know the Illini community.

And while Bret will get most of the spotlight during their years in Champaign, as the head football coach always does, he knows getting to this point in his life and football career would be impossible without Jen.
“I think as men we always gravitate to, you know, comfort and doing the same things,” Bret said. “You know, men always want to wear the same shirt, same hats, the same shoes. And Jen has always driven me to get out of my comfort zone and to embrace things that I’m not familiar with. I don’t think I would ever have gotten that from anybody else but her. Because usually when you’re head coach, nobody tells you to do things to get uncomfortable, but she always does. And she does it in the right way.
“And the jobs here that we have with our children, I mean, she knows more than anything how important those girls are to me. And the things we sacrifice and the things she does to make sure that’s always in check is something that’s really special.”