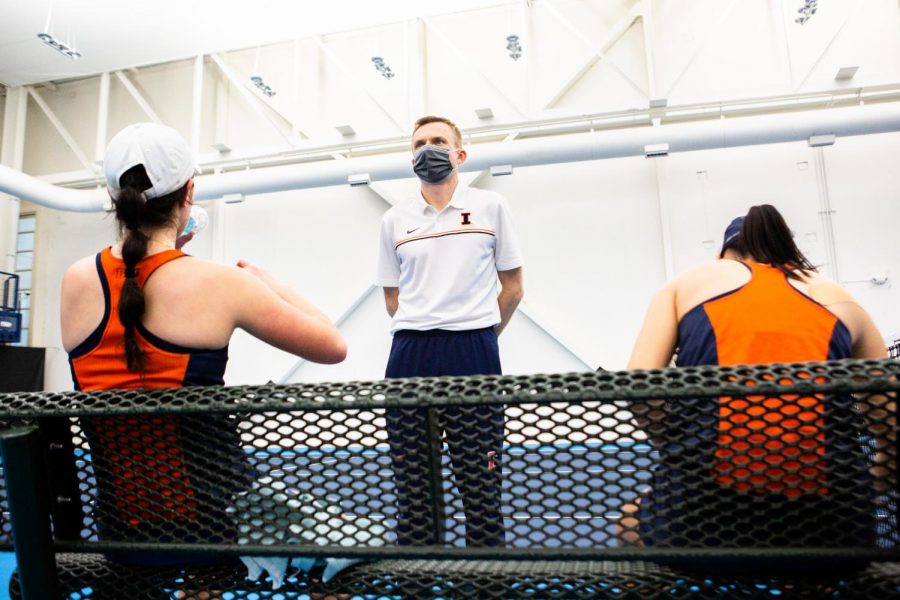 Head coach Evan Clark waits for Kate Duong and Ashley Yeah to cool down before giving them some tips during their doubles match against Wisconsin Feb. 26. Clark has transformed the program since taking over as head coach in 2016.

Over the past few years, the Illinois women’s tennis team has seen a resurgence on the court, and this all began with the arrival of head coach Evan Clark in 2014.
Clark began his time at Illinois as an assistant coach. He had spent the previous two seasons as the head coach of University of North Carolina Wilmington, where he finished his tenure with a record of 31-11 and earned the Colonial Athletic Association’s Coach of the Year honors.
Despite his success on the east coast, when the opportunity came for Clark to come to Champaign, he did not want to pass up the opportunity.
“With being an assistant, I knew there was a lot of potential at Illinois, as the tennis programs have always been strong,” Clark said. “I was fortunate enough to be at the right place at the right time.”
After one year as an assistant with the Illini and another as interim head coach, on June 10, 2016, Clark was named the head coach of the Illinois women’s tennis team.
At his press conference when he was named head coach, Clark had the goal of building on the progress that was made during his season as the interim head coach and soon turning the program into a “national contender annually.”
Whenever a new coach comes into their position, there is always a change in mindset throughout the facilities, regardless of the sport or school. A new recruitment process, training regimen and strategies all come into play; however, Clark made the transition happen seamlessly.
“It wasn’t anything earth-shattering,” Clark said. “But we changed the culture pretty quickly, in terms of how everything was going to work, while putting in my system.”
Under Clark, the Illini have become one of the strongest women’s tennis programs in the Big Ten, consistently finishing in the top of the conference.
In Clark’s first three seasons at the helm, the Illini compiled an overall dual record of 52-31, including a 25-10 mark in the Big Ten. Along with the great play on the court during those seasons, players on the Illinois tennis team under Clark also had a perfect graduation rate.
During the 2017-18 season, Clark led Illinois to one of its best seasons in school history. The Illini finished the regular season with a whopping 22 wins and a berth in the NCAA tournament for the first time in eight years.
“In rankings, we got to five in the country that year, and if you were to tell me we’d be number five, I would have said you were crazy,” Clark said. “We definitely got there a bit quicker than I thought in 2018, but the personnel was all there, with the upperclassmen and four freshman.”
One of the ways to make any collegiate team up their game is by putting them against the best competition in the country year in, year out. When Clark got the head coaching job, he knew it was time for the Illini to up their competition if they wanted to regain national respect.
“One big thing that changed when I took over was the schedule,” Clark said. “And so we played a really competitive schedule when I began and ever since then. The year we got to five in the country, we beat pretty much all of the top ten teams in the country. That was a tough thing to do, but we were fortunate enough to win a lot of those matches. But that is always going to be our philosophy; we are going to play tough opponents.”
Fast forward to the current season, and the first recruiting class Clark brought to Champaign are all seniors now. Though the previous season was abandoned due to the COVID-19 pandemic, it is safe to say Clark has done well so far as head coach.
After a slow start to the season, the team has been playing well as of late. The Illini sit at 6-7 during a year in which they are only facing off against Big Ten opponents.
As Illinois looks to finish the end of the year strong ahead of the Big Ten tournament later this month, this group will look to Clark for guidance on how to be at their best.