Illinois gets knocked out of Big Ten Tournament by Iowa 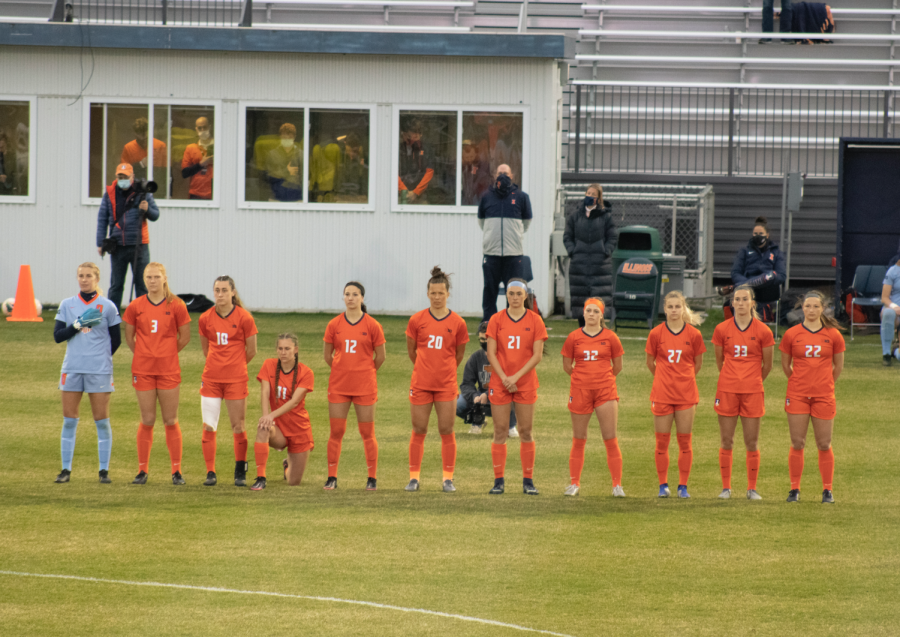 The Illinois soccer team lines up for the national anthem before the game against Iowa Thursday night. The Illini fell to the Hawkeyes 2-1, knocking them out of the Big Ten Tournament.

All it took was two minutes into overtime for Iowa to get the golden goal to send them into the next round of the Big Ten Tournament regional weekend.

Illinois fell to Iowa 2-1 after the game winning goal by Meike Ingles sealed the win.

The goal evoked a lot of emotions among the Illini, who saw their chances of continuing their season end in a matter of seconds.

“I’m sad,” head coach Janet Rayfield said. “I’m sad for this group. It’s a tough one, and I feel for them. I don’t think it was an effort issue tonight. I’m disappointed in the outcome, not what we wanted, but that’s sports.”

Going into the game Illinois was the No. 2 seed, while Iowa sat last as the No. 7 seed in the West Region. Last time the two met was back in February, when the Illini came away with the 3-0 win.

Energy was high going into the game for the Illini, as Demirjian Park had its grand opening just two days before. Family and friends were in the stands for both teams for the second time this season.

Illinois had the first shot of the game in the fourth minute from Kendra Pasquale, who put a low driven shot, but Iowa goalkeeper Macy Enneking was able to save it easily.

Next chance comes from Pasquale again with a cross this time to Hope Breslin and flicks it Eileen Murphy for a shot, but it was another easy save for Enneking.

The Hawkeyes had the best chance of the game after a wide open Samantha Tawharu half-volleyed the ball that rattled it off the crossbar.

The remainder of the half saw both teams get their chances, but Iowa was doing the home team one better and nearly getting close to scoring.

The first 45 minutes remained scoreless, and it only took the Hawkeyes two minutes into the second half to get the first goal of the game.

Right in the Illini box a give and go between Tawharu and Josie Durr got the shot off and even though Sami Sample was in the right place, the ball powered past her into the net.

However, within five minutes, Illinois responded with their own goal. A cross sent in from Makena Silber got deflected right into the feet of Kennedy Berschel. With composure, she touched the ball past her defender to get a shot off her left foot into goal for the first one of her career.

The Illini and Hawkeyes were neck and neck up until the end full 90 minutes to break the deadlock.

Illinois’ last chance of the second half came from a connection between Zoey Kollhoff, Silber and eventually Pasquale getting the shot off, but saved by Enneking.

Into overtime, it didn’t take long for the Illini to get their opportunity to finish the game. Forty-three seconds in and a long pass to Silber sent her running onto goal for her shot only to be saved easily by Enneking.

With Illinois unable to finish their chance, Iowa took advantage of theirs. Struggling to clear the ball in Illinois’ defensive third, Iowa had the chance to edge the mistake and get their goal.

Two failed attempts lead to Tawharu passing it out to an open Ingles, who rifled her shot past Sample to end the game.

While the team had their chances in the game, what lacked was the connection in the midfield.

“It just wasn’t what it needs to be,” Rayfield said. “I kept saying from the sidelines ‘connect us’ and we were trying to play balls that were way too long or we didn’t get around the ball and really connect from our backs to our midfield to our forwards in the way that we need to move the ball up the field with some composure.”

An abrupt end to the Illinois season, Rayfield had a lot to say for the senior class, who were hit the hardest with the loss.

“I said this in the huddle ‘We’ll call this building a home because of the culture that they have given us,’” Rayfield said. “The structure of the building doesn’t mean anything without the legacy of the people that helped them build it.”

“You miss every class that graduates, but this class led us through something that no one else ever had to,” Rayfield said crying. “They led us through one of the toughest years in college athletics, and I will forever be grateful because they led with such compassion and adaptability and resilience and that will forever be a part of our program. This group will always have a special place because this was a special and unique year. I think that’s the best part about this class.