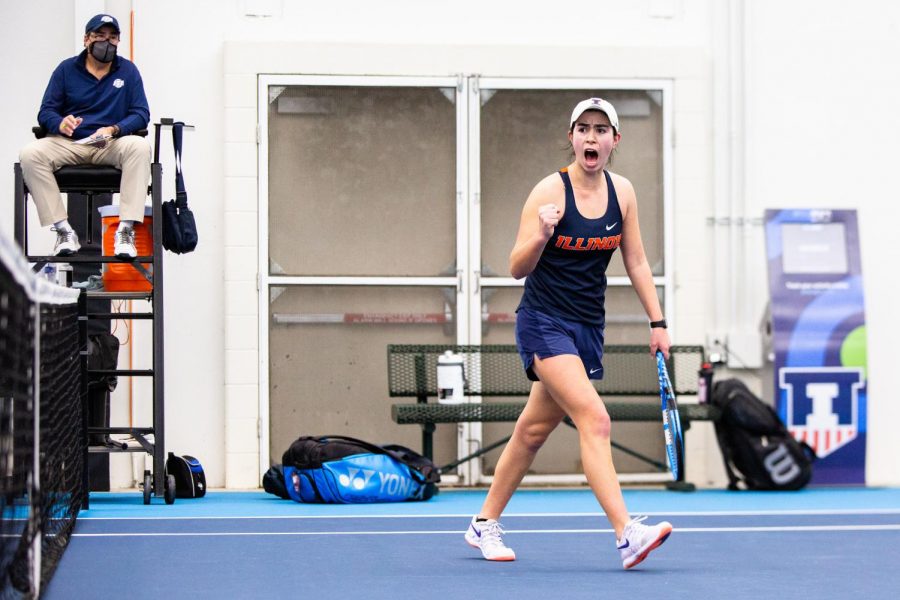 Freshman Kate Duong celebrates after winning a point in her doubles match against Wisconsin Feb. 26 at Atkins Tennis Center. The Illinois women’s tennis team will face Michigan State Friday in Urbana, Illinois, before traveling to West Lafayette, Indiana, for its match against Purdue Sunday.

After a week off from competition, the Illinois women’s tennis team is back at Aktins Tennis Center Friday to face off against the Michigan State Spartans before traveling to take on the Purdue Boilermakers Sunday.

The Illini come into this pair of Big Ten matches sitting at 6-7 , as they will look to take advantage of two bottom-half teams in the conference. With a pair of wins, Illinois could move to 8-7, putting them above .500 for the first time this season.

“We feel really good about where we’re at,” said head coach Evan Clark. “We got off to a slow start, but over our last seven or eight matches we’ve been really successful. Even the matches we’ve lost have been a point here and there.”

The first squad to visit Urbana this weekend will be Michigan State on Friday afternoon, who comes into match play with a 4-10 record. In early March, Illinois visited East Lansing and defeated the Spartans 4-2 with the help of some strong performances in both singles and doubles from sophomore Ashley Yeah and freshman Kate Duong.

Despite its record, Clark knows Michigan State will be a tough opponent, especially after the week off from competition.

“Michigan State is a really talented team,” Clark said. “We’ve always played them really close. They’re a really quality team, so we know we will get their best shot this weekend.”

Fast forward to Sunday, the Illini will travel to West Lafayette, Indiana for a matinee with the Purdue Boilermakers.

Purdue currently boasts a 5-9 record, sitting one spot below Illinois in the Big Ten standings. Just two weeks ago, the Illini squeaked out a 4-3 victory against the Boilermakers, with a comeback victory in singles by senior Asuka Kawai being the highlight of the day.

The top of the Big Ten standings are all but secured as of now, with Michigan (13-2), Northwestern (16-2) and Ohio State (15-3) all having impressive seasons. These matches against Michigan State and Purdue are vital for the team’s momentum going into not only next week’s match against Northwestern, but the Big Ten tournament later this month.