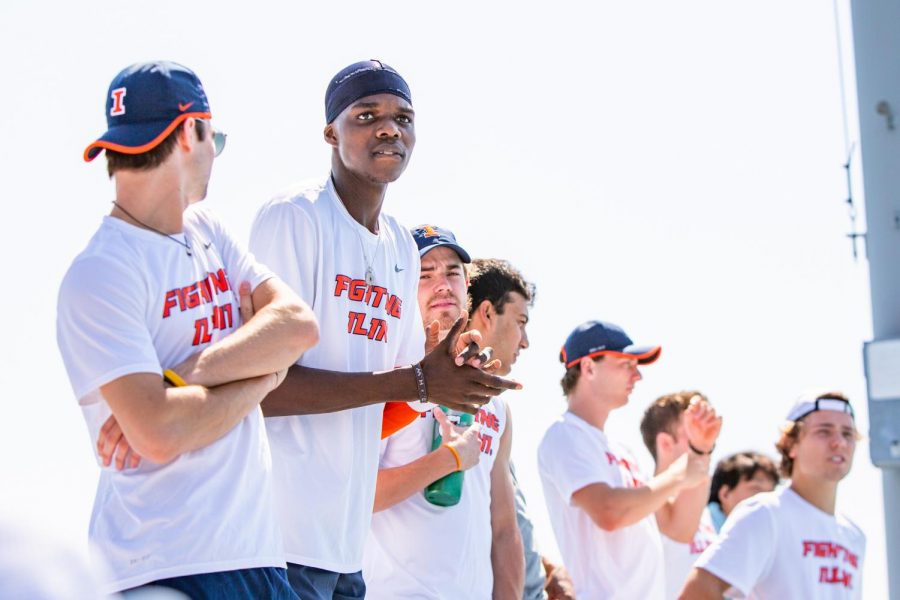 Junior Kweisi Kenyatte and his teammates cheer on a fellow player in a match against Minnesota on Sunday. The Illinois men’s tennis team will travel to Iowa and Nebraska this weekend in hopes of keeping their winning streak alive.

The No. 14 Illinois men’s tennis team can’t seem to stop reeling in wins. With their imposing presence on the court, the Illini have a resounding winning streak of 10 and sport a solid 14-2 record. Looking to extend these hard-earned accomplishments before the regular season wraps up, Illinois will travel to Iowa and Nebraska this weekend.

Having swept the Hawkeyes 7-0 once before on March 5, the Illini will face them once again Friday. With a sole match win over Wisconsin to show for its past eight matches, Iowa seems to have sunk into somewhat of a lull since playing Illinois. Its current six-match losing streak is the longest Iowa has suffered under head coach Ross Wilson in his six years in Iowa City.

Understandably, though, the Hawkeyes’ concerns may lie elsewhere. In a pandemic-induced decision, Iowa’s program was cut last year, and this season will be its last. With this said, the Friday match is a bit monumental, as it will be the end of an Illinois-Iowa rivalry that dates back to 1905.

Despite its struggles, Iowa has come close to breaking out of its drought. The final score for three of its last eight matches was 4-3.

An instrumental part of Iowa’s final lineup against Illinois will be the doubles duo of Will Davies and Oliver Okonkwo. The pair is ranked No. 10 by the Intercollegiate Tennis Association, which is higher than any of Illinois’ partnerships, though Zeke Clark and Alex Brown follow close behind at No. 14.

In their previous matchup, Davies and Okonkwo beat Aleks Kovacevic and Kweisi Kenyatte on court one, but the team failed to capitalize on the momentum and dropped its shot at the doubles point by taking losses on the remaining two courts.

On Sunday, Illinois will ride out the roads again to take on the 1-11 record-holding Nebraska, another team that’s been scrambling to find a rhythm of play in its own way. In their last match-up, the Illini dominantly blew out the Cornhuskers 4-0.

This time around, Nebraska is coming off of its first win of the season after defeating Iowa 4-3 last weekend. Shunya Maruyama has played a pivotal role in the Cornhuskers’ change of pace, as he’s continuously put points on the board for the team at the No. 2 singles spot.

The ITA also ranked Nebraska’s doubles pair of Brandon Perez and Albert Sprlak-Puk at No. 74. In its last outing at Illinois, the duo led against Kovacevic and Alex Bancila before the match was left unfinished.

These few remaining matches will close out the Illini’s hectic season. Matches start at 1 p.m. Friday and at noon Sunday.