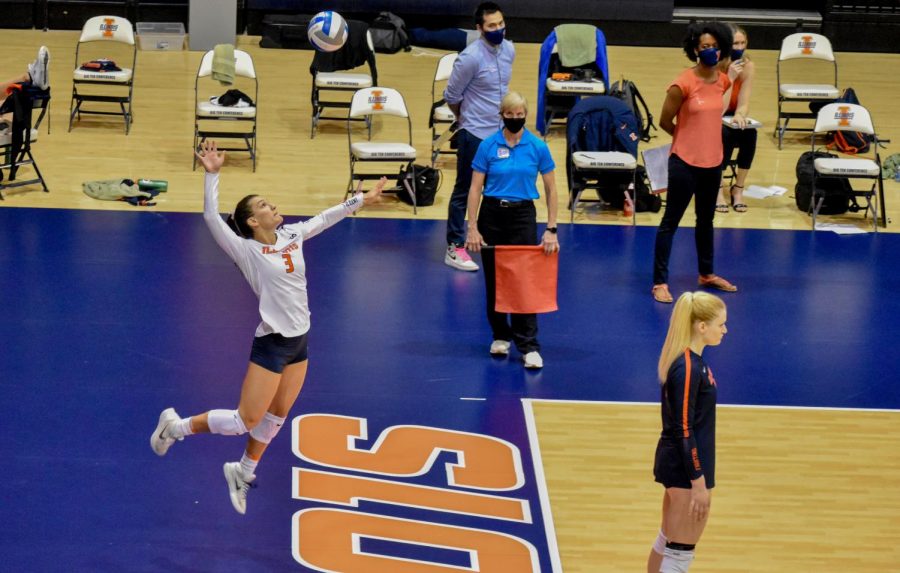 Junior Taylor Kuper serves at a game against Indiana on March 28 at Huff Hall. The Big Ten recently announced that Taylor Kuper and senior Megan Cooney will be apart of their All-Conference teams.

The Big Ten announced their All-Conference teams Thursday afternoon, and Illinois took home a pair of awards, with junior Taylor Kuper and senior Megan Cooney bringing home first-team and second-team honors, respectively. This is the first time either player has been named to an All-Big Ten team.

This season was Kuper’s first year playing libero at Illinois, and she thrived in the role. Kuper ended the season as one of the elite servers in the Big Ten, averaging a career-best 0.56 service aces per set. Defensively, she averaged a career-high 4.41 digs per set.

In a season with rotation changes and players in and out of the lineup due to injuries, Kuper remained a constant, steadying force for an up and down Illinois team.

Cooney came into the season prepared for an expanded role, and with the extra reps, she delivered, averaging a career-high 3.31 kills per set. Following last Saturday’s win over No. 8 Purdue, it was announced that Cooney, who was expected to graduate, will be returning to Illinois for a final year as she begins a graduate program at Illinois.