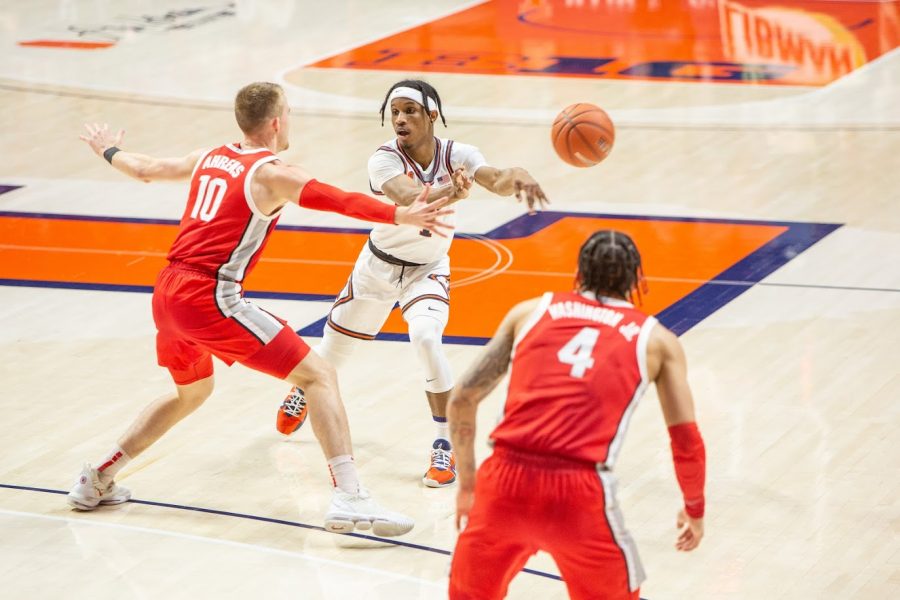 Senior Trent Frazier passes to his left during the game against Ohio State on Jan. 16. Frazier declared for the NBA Draft Friday, though he is still eligible to return for a fifth season.

Senior guard Trent Frazier announced that he is declaring for the NBA Draft Friday afternoon, though he remains eligible to return for a fifth season, as he is hiring an NCAA-approved agent.

“To my teammates, my brothers, and all of Illini nation, I want to say thank you for being part of this special journey,” Frazier wrote in a statement on Twitter Friday. “We have created memories that will last forever. You guys took me in and helped me grow into the person I am today. The support you guys have given me has been overwhelming. You have made these four years incredible and so special. I will be an Illini forever!!!

“With that being said, I will be entering the NBA Draft and hiring an agent. This is the moment I have dreamed of my whole life.”

Frazier made an immediate impact after joining the Illini as a freshman, leading all conference freshmen in points (12.5), assists (3.1) and steals. (1.7). The Wellington, Florida native also made the Big Ten All-Freshman Team and was named a All-Big Ten honorable mention by the media after his first year in Champaign.

After earning a second consecutive All-Conference honorable mention as a sophomore, Frazier found his defensive groove as a junior, leading the Illini with 29 steals while also racking up 12 double-digit scoring games.

As a senior, Frazier started all 31 games and averaged 10.2 points per game, the third-highest mark on the team. He was also the team’s most reliable 3-point shooter, hitting 55 treys.

Frazier was frequently tasked with guarding the opponent’s strongest shooter, so it came as no surprise when he was named to the Big Ten All-Defensive Team for the first time in his career. The senior guard also made the All-Big Ten honorable mention list for the third time.