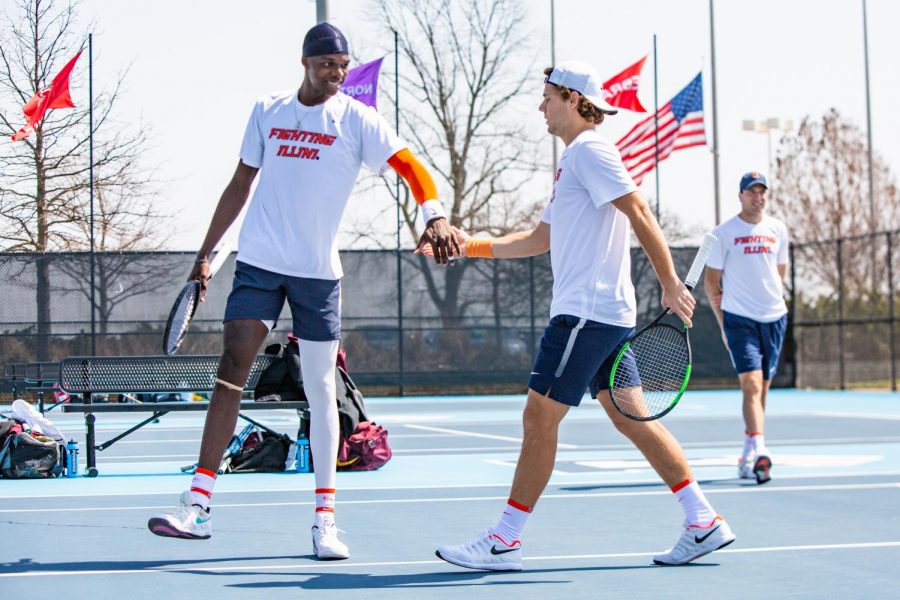 Junior Kweisi Kenyatte and senior Aleks Kovacevic high five each other after winning a point in their doubles match against Minnesota on April 4 at Atkins Tennis Center. The Illini men’s tennis team were named Big Ten West division champions after a successful weekend in Iowa and Nebraska.

Wins continue to flow in for the Illinois men’s tennis team, and after a weekend on the road, the Illini established their reign in the Big Ten.

Head coach Brad Dancer’s squad clinched a share of the West division title by beating Iowa 5-2 Friday. In doing so, Illinois also closed out its last ever match against Iowa with a win, as the Hawkeyes’ men’s tennis program is in its final season.

“I talked to (associate head coach Marcos Asse) about it after the match,” Dancer said. “I think one of the things I said was, ‘Man, this is our last trip ever to Iowa City. I don’t know if I’ll ever be back here, and I love that town.’ It’s a great campus. You know, it’s a little bit sad to me to think like that.

“When I was a high school senior, I went on a recruiting trip to Iowa, and that was one of the schools I considered going to, so there’s a long history there. … (I have) just a little bit of an affinity for that program and the people with it.”

The Illini gained the lead against the Hawkeyes when the first-time pairing of Aleks Kovacevic and Hunter Heck won, 6-2, on court two. Kovacevic’s usual partner, Kweisi Kenyatte, had a minor finger injury, so Dancer switched up the lineup to be “precautionary.”

“Hunter and Kova looked great out there,” Dancer said. “They looked fantastic. I think they controlled the flow with that match, and that’s always the biggest thing we’re looking for, so I was happy with that.”

In the fight for the doubles point on court three, Noe Khlif and Siphosothando Montsi were able to secure it with a 6-4 victory.

The match against Iowa set Illinois’ third-highest conference winning streak at 11 — that is, until the team added another win against Nebraska in their second 4-0 sweep of the season.

“I’m so happy for the guys,” Dancer said. “This … group — it’s a special crew. Coaches always say that. I hate using those cliches, but this crew really is unique with the leadership, the talent, the personalities.”

The No. 9 Illini cemented their title outright as the Big Ten West division champions Sunday. Illinois’ new honor — its first since 2015 — is accompanied by its 15 overall conference titles.

Early on against the Cornhuskers, Clark partnered with Heck to take the team’s first match at 6-4, and the duo of Khlif and Montsi came off with a 6-3 victory to grab the doubles point. In routine fashion, the Illini also dominated in singles, winning all three matches in straight sets.

One player in particular added to the Illini’s achievements of the day. After defeating his opponent 6-2, 6-0, Clark became the 16th Illini in program history to reach 100 career singles wins.

“He’s constantly, every year, one of most improved players, and I would say this year is no different,” Dancer said. “He’s made some big jumps in his serves so far this year, so it’s just funny to watch his skill set develop and his mindset become more relaxed.”

Since the beginning of the season, Clark has been hitting his stride. He remains undefeated in singles, as his record sits at 14-0, and the same goes for him in doubles, where he sports an 11-0 record, with nine wins coming from a partnership with Alex Brown.

Dancer’s squad moved their record to 16-2 and earned the No. 1 seed in the West for the Big Ten Tournament. In the coming weeks, Illinois will wrap up its two remaining matches of the regular season against Northwestern and Indiana before the tournament starts April 29.