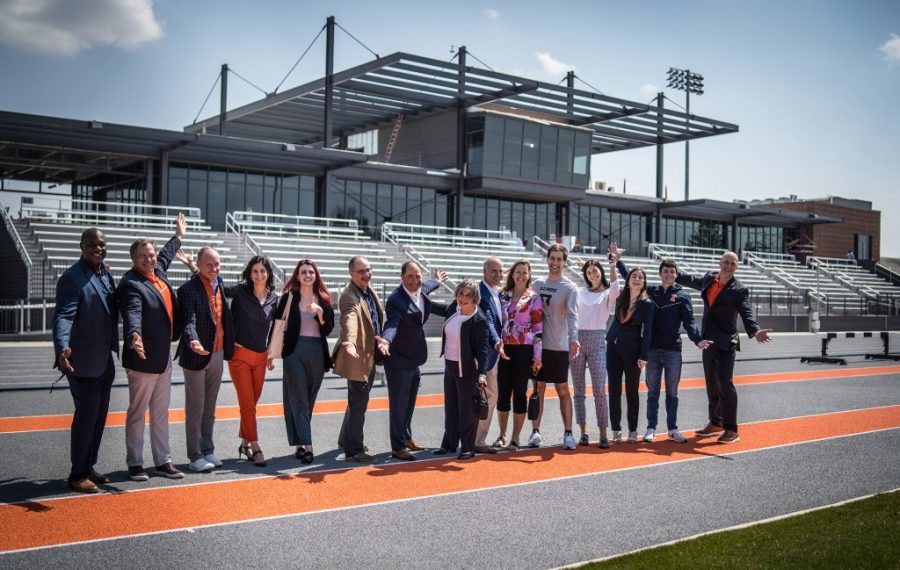 Part of the Demirjian family along with other donors pose for a photo in front of the bleachers at Demirjian Park on Tuesday. The newly constructed park will serve as home to the Illini track & field and soccer programs.

When Mike Turk, the director of track & field and cross country, brings up Illinois’ program history, he doesn’t think it’s good; he thinks it’s historic, as it has featured Hall of Fame coaches, Olympians and 65 Big Ten championships.

But something was off within the program. Athletes had no lockers. When it rained, the athletes had no locker rooms to go to. Spectators watched meets from a single set of stands. The old Illini track stadium was suited better for Champaign Central High School, not a top research institution.

Now with the opening of Demirjian Park, the new home to the track & field and soccer program, the Illini have the capability to build up its brand and compete against the nation’s elite.

“When you go to Indiana, Ohio State, Texas and see the facilities, it is impactful,” Turk said. “(Demirjian Park) shows the program is important and that there’s an expectation. I think it’ll open doors for recruiting.”

It appears college athletics has become an arms race for who can have the nicest stadium, the flashiest facilities, etc. But Turk praises the Illini for avoiding overspending and providing amenities that are directly beneficial for the program. The new park contains new amenities such as locker rooms, video and meeting rooms, lounge and study spaces, sports medicine and nutrition facilities and coaches’ offices that benefit 25% of all Illini athletes.

“We went from the bottom half in facilities to the top,” Turk said.

Turk has been in the coaching business for over 37 seasons. He’s been employed under numerous athletic directors who all say upgrading facilities is a must. Repeatedly, however, Turk had been let down, as the rhetoric involved no substance.

Turk is said to build his program around a philosophy that is based on four core values: unity, integrity, transparency and focus. Athletic director Josh Whitman hit that mark when he promised facilities would be improved soon under his leadership.

While Turk credits the Demirjian family, along with seven other smaller donors that allowed for the construction of the park, the process was all overseen by the athletic director, who was able to get the ball rolling after years of nothing.

“I’ve had some great athletic directors and some horrible ones,” Turk said. “But the thing about Josh, when you talk about what you want in a leader, it’s about what gets carried out. What he says he means. It was really easy for me to buy into his vision.”

Under Whitman’s leadership, facility upgrades haven’t been narrowed to only revenue sports, as he’s on track to eventually upgrade each facility while building a hockey stadium in downtown Champaign, which just got stalled due to the impacts of COVID-19.

While the Illini still managed to compete well against other Big Ten rivals, old facilities put them in a bind when competing for talent. Even when Demirjian Park was just being built, Turk could sense the new building was catching the eyes of high schoolers. Now, with the new park, the Illini will have a platform to hold home meets and conference tournaments.

“It’s quite impactful when we are asked why we don’t have more home meets,” Turk said. “Well, you have to have people who want to run there. Now, we can. Outside of our community, (Demirjian Park) created buzz.”

On April 23, Illinois will host the Fighting Illini Big Ten Relays, allowing the conference to check out the new park for the first time. Turk, who’s been in coaching for almost four decades, has some nerves about the late spring meet.

“I’m a little nervous; it’s a new event at the facility,” Turk said. “But it’ll be huge. Every school in the Big Ten will be there. There may be more athletes here than the Big Ten Tournament.”