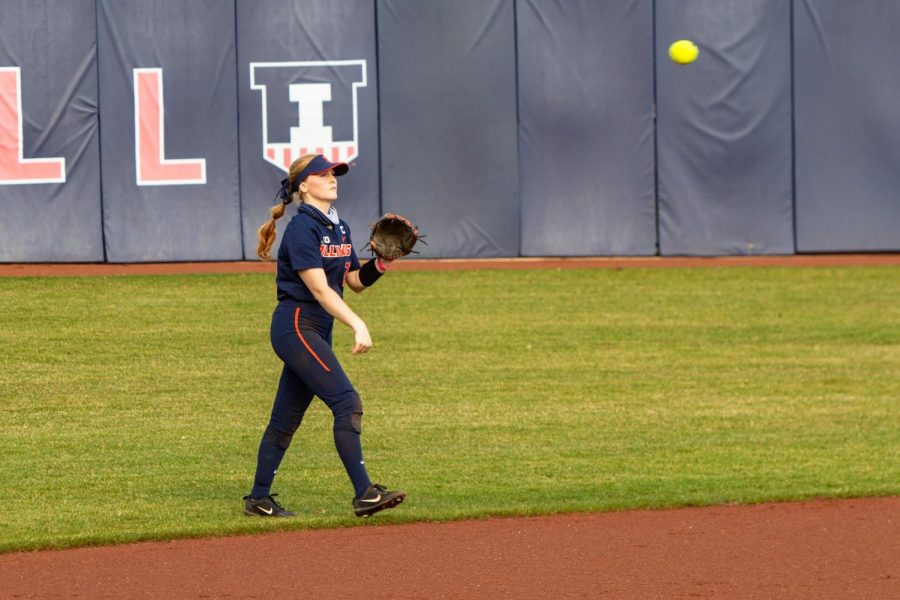 Junior Avrey Stiener catches the ball during their game against Minnesota on March 28. The team may have placed fourth, but they continue to improve their skills individually.

As the weekend comes to an end, Illinois returns to Champaign with a record of 15-9. Despite dominant individual performances, the Illini’s four-game series didn’t go as planned. Illinois came out of the series against Nebraska with a record of 1-3.

They took the series opener on Friday evening, 4-0. Illinois dropped both games on Saturday’s doubleheader — 5-4 in game one and 10-6 in game two — before dropping Sunday afternoon’s series finale, 8-6.

“We learned a lot about ourselves this weekend,” said sophomore Kelly Ryono. “It can be frustrating when we’re not getting the results that we like and want, but at the end of the day, we’re learning from every single play and every pitch.”

Though the Illini didn’t “shuck the huskers” like they wanted to, they still brought their individual skills, techniques and mindsets together to work as a cohesive unit. Illinois currently remains ranked fourth in the Big Ten, taking each series one step at a time. The dynamic and confident team strengthens its mental and physical growth as they continue through the season.

In Friday evening’s victory, the Illini were led by sophomore Delaney Rummell, who went 2-for-3 with an RBI and two runs scored. Junior Sydney Sickels was impressive in the circle, throwing her seventh complete game shutout and eighth complete game of the season. Sickels moved to 9-2 on the season, striking out seven while allowing four hits.

“One of our key factors of this team is that we can really produce offensively,” Ryono said.

The Illini scored a combined for 10 runs on 18 hits during Saturday’s doubleheader. Junior Avrey Steiner led Illinois’ offense, going 5-for-9 Saturday. Rummell was also a powerhouse in her hitting, going 4-for-8 with a home run and 3 RBIs. Junior Addy Jarvis started game one, while Sickels took over the pitching circle for game two.

Despite game one starting its three-game losing streak, Illinois played solid softball all around. During Steiner’s second at-bat of the game, she singled, extending her hit streak to 14 consecutive games. Jarvis pitched 5 1/3 innings, allowing three earned runs while striking out four. Sickels came in for Jarvis in relief to record the last two outs of the bottom of the sixth inning.

Game two of the doubleheader the Illini came out swinging, as they put three runs on the board in the top of the first. Steiner continued her offensive momentum, going 4-for-5 at the plate with one RBI and a run scored. Freshman Tori McQueen, graduate student Kelsie Packard and Sickels each pitched for Illinois in game two.

In the series finale Sunday afternoon, the Illini’s offense and defense fought hard against the Cornhuskers. Junior Kailee Powell drove the Illini offensively, going 2-for-4 with a double, two RBIs and a run scored. Sickels started in the circle, while Jarvis entered as a relief pitcher in the third inning.

Illinois tried to make a comeback in the top of the fifth, as the offense brought their competitive toughness. Rummell doubled to put runners on second and third. Senior Katie Wingerter came through with a sacrifice fly to put the Illini on the board. Sophomore Kelly Ryono crushed a double to left field, following sophomore Gabi Robles’ RBI single and Powell’s RBI double.

Illinois strives to end its losing streak as it look forward to wins, heading into another four-game series against Purdue this upcoming weekend at Eichelberger Field in Urbana.

“Coming into this weekend, we’re definitely going to overcome what happened this last series,” Ryono said. “Even though we didn’t necessarily get the results we wanted, we’re all excited to come back and play at our home field.”