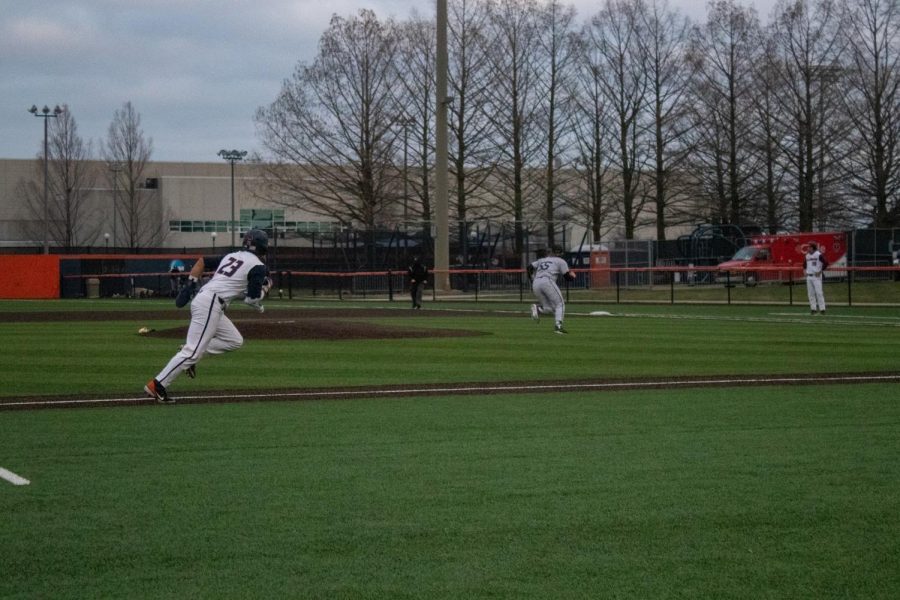 Sophomore Branden Comia runs to first base after a hit on March 26. The Men’s Baseball Team has to reschedule their game against Indiana because of bad weather.

Plagued by storms and rain all weekend, Illinois baseball’s three-game series at No. 24 Indiana was shortened to just two games, as Sunday’s weather forced a postponement. The Illini left Bloomington on a sour note, as they dropped both games and are now on a three-game losing streak.

Lavender had control through most of the game but let three home runs go by through six innings pitched.

After trailing 1-0 going into the fifth inning, the Illini offense found some consistency, going for a three-run inning. Taylor Jackson started things off with a single, but the inning looked to be over after consecutive strikeouts. An RBI triple from Justin Janas brought the energy back, and the Illini tied things up at 1-1.

A string of hits by Cam McDonald, Jacob Campbell and Jackson Raper brought in two more runs to give Illinois a 3-1 lead heading into the bottom of the fifth. The lead wouldn’t hold for long, as Drew Ashley recorded Indiana’s second home run of the day with a two-run shot to left center, tying the game back up at 3-3.

Cole Barr’s home run to center field in the bottom of the sixth gave the Hoosiers the lead back before a lightning delay postponed the final two innings for almost two hours. After getting back on the field, the Illini tied it back up in the top of the eighth with a homer to left center by Raper, who went 4-for-5 Friday.

While Illinois held the momentum, Indiana closed out the game in the bottom of the ninth with a two-run home run off senior pitcher Ryan Kutt.

The Hoosiers hit the Illini even harder on Saturday, but it was Indiana’s pitching that won the series. McCade Brown, who pitched the first five innings, and Braydon Tucker, who was the only reliever for the Hoosiers, combined for a no-hitter against the Illini. According to fightingillini.com, there is no history of Illinois baseball ever failing to record a hit.

Things looked promising on the defensive end for Illinois, as junior Riley Gowens earned the start and recorded three scoreless innings. With two outs in the fourth inning, the Illini made a defensive error, which scored two runs. On the next at-bat, Morgan Colopy sent a two-run bomb to left field, giving Indiana a 4-0 lead after the fourth inning.

Gowens recorded a career-high eight strikeouts and gave up just three hits before Cole Kirschsieper relieved him in the fifth inning. Kirschsieper gave up another pair of runs in the sixth inning, while Grant Leader allowed another two Hoosier runs in the seventh.

Illinois’ offense had opportunities to score, as its drew eight walks in the game. Both McDonald and Branden Comia had long-standing hitting streaks snapped, and Comia lost his 37-game on-base streak.

A makeup date for the series’ finale has yet to be announced, but Illinois will be back home this weekend to host Michigan State and Purdue for two games each.