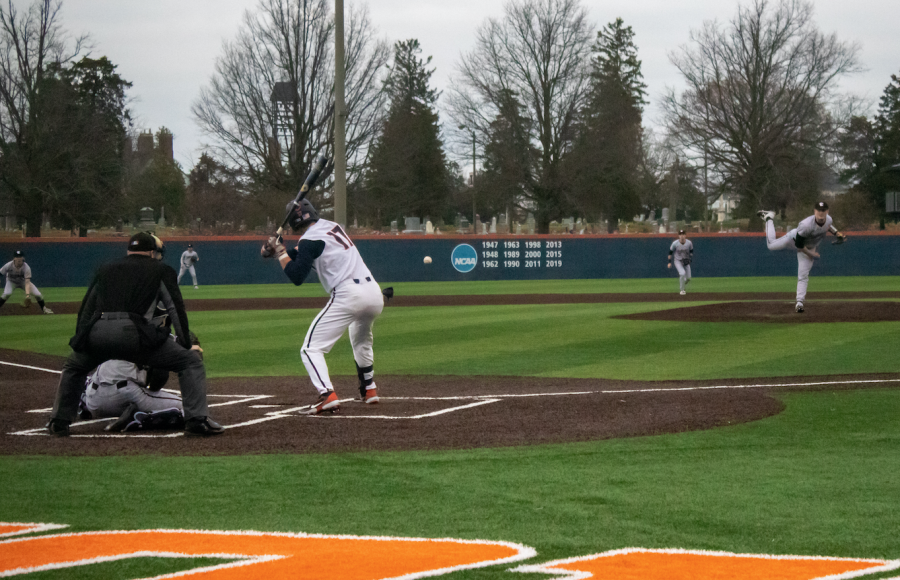 Sophomore Justin Janas hits the baseball during the Illinois game against Northwestern on March 26. Janas used the offseason to become one of the top hitters on the team.

In Illinois’ shortened 2020 season, then-freshman Justin Janas recorded just six at-bats, failing to connect on any. When COVID-19 canceled the remainder of the season, Janas had two options: cruise through the offseason and occasionally pitch-hit in 2021 or transform his body and mindset to earn a starting role on a young team.
Picking the latter option, Janas not only made his way into the starting lineup, but he became the Illini’s top hitter just six weeks into his sophomore season.
“This season everything was still pretty new to me because I didn’t experience a whole lot last year,” Janas said. “Everything has been going good. It’s kind of exciting. The first couple games there were a little bit of nerves, but as the season started to go on, everything started to flow together really nice.”
Becoming the best hitter for Illinois is no easy feat, as the team is the second-best offensive team in the Big Ten, sitting just behind Nebraska with a .285 overall batting average. And Champaign is home to some big hitters like Branden Comia — who hit .426 last season — and Jackson Raper — who hit .436 in 2020 for Catawba College.
Janas’ success didn’t come easily, though. Heading into the long offseason in March, Janas knew he needed to make changes, both physically and mentally. So he worked with Illinois baseball trainer Justin Houng to find a diet that would help him “lose some weight and turn everything else into muscle.”
“Every week, I would send (Houng) what I ate, like my whole diet for the week and how many calories and stuff I consumed,” Janas said. “I would send that to him like every Friday I think it was, and he looked up on it, and he made sure I was putting the right things in my body. And I pretty much followed with that all throughout quarantine and that helped a lot.”
When it came to building that muscle, Janas was able to work with his old trainer back home in Homer Glen to get advice from someone he trusted.
With the plan for physical changes in place, Janas began to work on the mental side of things. That started with just getting more comfortable with his swing, as he made some minor adjustments like closing off his stance a bit. Then it came down to getting the reps, so Janas practiced his hitting nearly every day through the spring and summer while teaching himself to simplify his swing.
“The biggest thing for me is just keeping things really simple,” Janas said. “Last year, I had way too much going on and in my head, like trying to fix this, trying to fix that. This year, I just kind of just cleared my mind and just trusted my ability, kind of just really thought about just barreling up the baseball like nothing special.”
A simple yet matured mindset has helped Janas improve each weekend as a sophomore, as he has gone 14-for-26 over the last eight games. Janas has also solidified himself as one of the conference’s best hitters, ranking fourth behind Zack Raabe of Minnesota, Mike Nyisztor of Rutgers and Anthony Calarco of Northwestern.