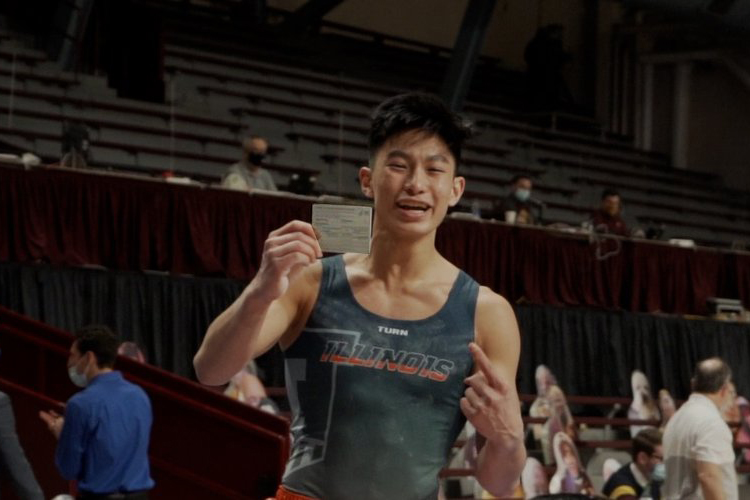 Sophomore Evan Manivong sticks his landing and celebrates after by showing off his vaccine card during the meet against Minnesota on March 22. While originally meant as a joke between teammates, Manivong used the stunt to raise awareness about vaccinations.

During Illinois’ March 22 meet against Minnesota, sophomore Evan Manivong celebrated his stuck vault landing with a move The Athletic’s Olivia Witherite called “the ultimate flex.”
After sticking the landing and saluting the judges, Manivong reached into his uniform and pulled out his COVID-19 vaccination card, holding it up for his teammates — and the Big Ten Network’s cameras — to see. Video of Manivong’s vault performance and subsequent celebration was posted to the Illinois men’s gymnastics team’s official Twitter account.
There was some confusion about what Manivong had displayed, but he cleared it up with a tweet of his own later that night while encouraging people to get vaccinated.
“It’s my vaccination card … go get vaccinated everyone!” Manivong tweeted.
Manivong and his teammates were vaccinated a few weeks earlier when a local clinic had extra doses of Johnson & Johnson’s single-shot vaccine.
Two weeks after Manivong displayed his card, Witherite shared the video on her own Twitter account, and the video went viral.
As of Sunday, the video has more than 3.7 million views, and Witherite’s tweet has garnered almost 58,000 likes and 11,700 retweets. Manivong’s own tweet has around the same number of likes as Witherite has retweets, with 2,600 retweets of his own.
The story was picked up by the Chicago Tribune, The Athletic, The Washington Post and CNN, among a plethora of other news sources. Stephen Colbert included the video in his April 6 show, calling Manivong’s celebration, “A very cool way to raise awareness about vaccination.”
While Manivong turned the moment into a mini-vaccination awareness campaign, it was originally meant as a joke between him and his teammates.
“We were trying to think of fun celebrations we could do to get the team hyped,” Manivong said. “Other teams have dances and really creative celebrations. So I was like, ‘Maybe I’ll pull out my vaccine card.’”
As the Illini rotated to vault, Manivong’s best event, he knew it was the perfect time for his planned celebration. But he had to make sure the card would stay tucked inside his uniform as he flew through the air. His warmups proved it would.
Head coach Justin Spring knew at the start of the meet that Manivong had brought his card with him to Minneapolis, but he didn’t know why.
“I didn’t know it was going to make an appearance after a big vault,” Spring said. “I was just as surprised as anyone else.”
Manivong’s celebration did its intended job of hyping the team up, as he says it gave the Illini some momentum for the remainder of the meet. Illinois went on to defeat Minnesota by a full point, 393.800-392.800.
While he expected the rare stuck landing to gain some attention within the gymnastics community, he didn’t expect the celebration to go viral outside the gymnastics community.
“I started to realize it was blowing up when (Witherite) posted the video, and I was getting a bunch of tags (on Twitter),” Manivong said. “I was watching the views counter, and it had 10,000 views, and then it had 70,000 an hour later, and then 100,000.”
For comparison, videos posted to the team’s Twitter account typically garner a few hundred views; the video of Manivong has a few million.
The comments on various Twitter posts regarding Manivong have generally been positive, praising him and his celebration.
“It’s an insane feeling,” Manivong said. “It’s fun to be a part of.”
Spring couldn’t imagine a better person on his team than Manivong to go viral.
“He’s a great kid,” Spring said. “He’s a hard worker. And he’s super into social media. He does a lot of videography stuff for us, so I think this is a really great opportunity for his skill set.”