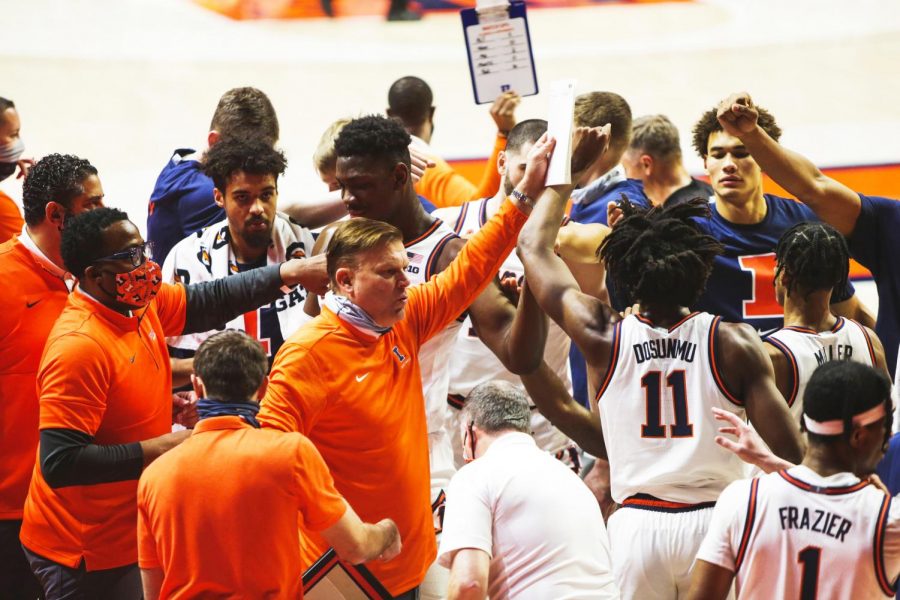 Illini basketball head coach Brad Underwood finishes a timeout huddle with his team during the game against Purdue Jan. 2. Underwood has been using his time in the offseason to recruit players from the transfer portal.

As soon as Illinois’ season came to a conclusion on March 21, Brad Underwood didn’t have time to rest.
Sure, his team won’t play another game for months and a long offseason awaits, but at that point there were already hundreds of players in the NCAA transfer portal. As of this past weekend, that number was over 1,000.
With freshman Adam Miller entering the transfer portal, juniors Giorgi Bezhanishvili and Ayo Dosunmu electing to turn pro and seniors Trent Frazier and Da’Monte Williams both potentially not using their last year of eligibility, Underwood has been on the phone constantly recruiting players in the portal.
“It’s been the majority of my last 10 days,” Underwood said.
The rise of the transfer portal stems from a rule change that allows players to transfer one time without having to sit out for a season. This is a stark change from how things used to be, and landing a high-priority transfer now feels equivalent to landing a five-star recruit. The NCAA champion Baylor Bears had four of its top six scorers in its rotation come to Waco, Texas via the transfer portal.
Underwood didn’t always believe in the transfer route as the way to build a team, but he understands the importance of it now more than ever.
“I’ve always had the philosophy that I wanted to build with freshmen and develop them,” Underwood said. “I think we’ve been an unbelievable program in development of players. I’ll use Ayo (Dosunmu), a young man who’s gained 30 pounds and added nine inches to his vertical, couldn’t bench 185 when he got here and did it 16 times the other day. That is development and maturity.”
Thus far, Underwood has had several swings and misses in the portal. He was successful in landing Florida transfer Omar Payne as a potential replacement or back-up for sophomore Kofi Cockburn. But the Illini narrowly missed on Texas Tech transfer Nimari Burnett, who elected to attend Alabama instead. Underwood and company appeared to be making progress on Indiana transfer Armaan Franklin, but he committed to Virginia this past week.
There’s still plenty of high-quality players in the portal that Underwood has been in contact with, and with plenty of scholarship spots available, expect the Illini staff to stay busy over the next few weeks and months.
Another new wrinkle is the potential for a player to enter and then return to the school they transferred from. For Illinois, this could apply to Miller, who entered the portal a few weeks ago and has not yet ruled out a return to Illinois.
“We want guys who want to be a part of what we do,” Underwood said. “As we have end of the season meetings, we’ll have those discussions. But that’s the world we’re in … They hold all the cards.”
Basketball and skill development is still a priority this offseason. Underwood said he hadn’t watched the Loyola game yet, but he plans on it. Recruiting becomes more important than ever with the rise of the portal, and with the landscape of college basketball shifting, expect this to be the new norm for college coaches across the country.