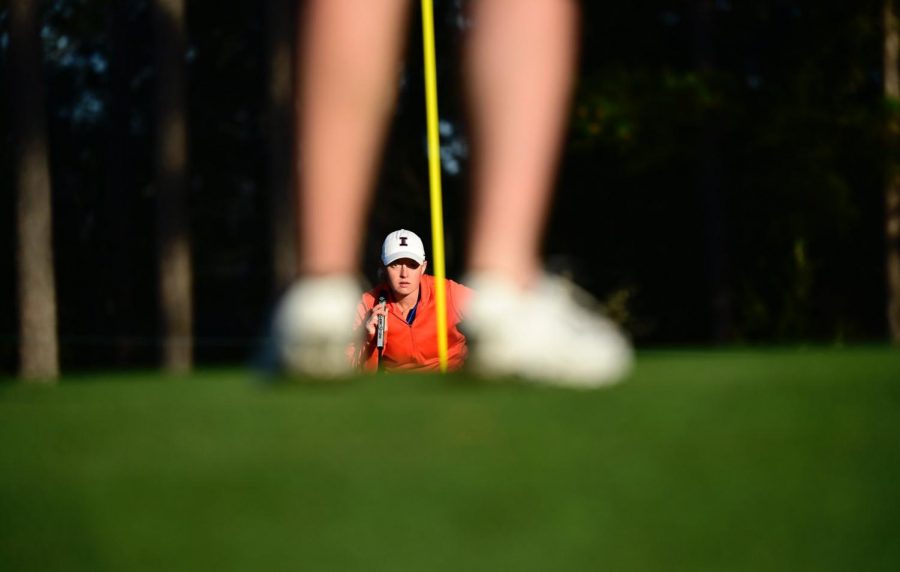 Senior Tristyn Nowlin squats down to plan her putt on the green. Nowlin prepares for a professional golfing career in her fifth year on the Illini women’s golf team.

As last year’s golf season was winding down with three regular season tournaments remaining, senior Tristyn Nowlin and the women’s golf team had straightforward expectations: they wanted to make a splash at the upcoming Big Ten Championships.

Nearly 13 months later, it may come as a surprise to see Nowlin expecting the same things, yet she remains at Illinois for a fifth season instead of the typical four. After the pandemic cut Nowlin’s fourth season short, she was convinced to change her plans and return for another year, using the extra year of eligibility granted to all spring athletes.

At the end of this year, Nowlin still plans on becoming a professional golfer by competing in state opens and going to qualifying schools, which are annual qualifying tournaments for national golf tours.

The Kentucky native has been golfing since she was 8 years old, but never considered playing golf at the collegiate level until late in her high school career.

“Realizing I wanted to play collegiate golf came kind of late,” Nowlin said. “I know I received a couple emails late into my junior and sophomore year (of high school). I didn’t really think about playing collegiate golf until I received those emails.”

It wasn’t until she found success at the junior level and in collegiate tournaments that she considered pursuing golf as a future career.

At her most recent solo tournament, the Augusta National Women’s Amateur, Nowlin finished in 51st place with a total score of +11. She also tied for third place at the Illini’s Clemson Invitational tournament with a score of -5 and helped the team finish fifth overall

Nowlin praises Illinois and all its resources for helping make her dreams a reality. She points to head coach Renee Slone as her “biggest golf inspiration.”

“I can talk about her for ages,” Nowlin said. “She puts 110% of her time into making us the best athletes, students and people we can be. … Coach really does take all of her time to try and help us grow and communicate with us about our goals. Whatever we communicate with her, she will do whatever it takes to put us in the best position to succeed.”

Though Nowlin has quite the resume with a long list of accolades, including making the All-Big Ten First or Second Team every season at Illinois and recording the second lowest single-season scoring average in program history with 72.58, she embraces the emotional and mental struggle she continuously faces.

She also applauds her Illinois teammates as one of her biggest motivators throughout her college career and recognizes the next stage of her career will come with a ton of changes.

At one point in her pursuit of success in college, Nowlin recognized she was having trouble remembering her purpose for playing golf and was focusing too much on results. She believes the key to continuing her success in golf is maintaining the perspective that golf is what she loves to do.

“I have goals and statistics I want to reach, but last season as I was preparing to end my collegiate career, I got too caught up into the numbers and eventually lost sight of my love for the game,” she said. “I lost a little bit of joy and passion for it.”

Nowlin says she purely focused on the outcome of tournaments. When she didn’t perform how she wanted to, she would be down on herself. Her main focus became the statistics, and she started to pay less attention to the ways she could improve.

“I’m able to be more self-aware, thanks to resources at the University and also my coaches,” she said. “Now, I’m able to embrace those struggles. I can look at the numbers, but I don’t determine my worth based on those.”

As her final season at Illinois is wrapping up, Nowlin is excited for the few remaining tournaments, especially since last season was cut short.

The Illini will travel to Bloomington, Indiana for the Indiana Invitational for their final regular season tournament of the year April 17-18.

“We’re excited. We’re going to get some really good feedback at the Indiana Invitational,” Nowlin said. “I know we’re capable of great things, but we don’t want to focus on the results and instead embrace the moment.”