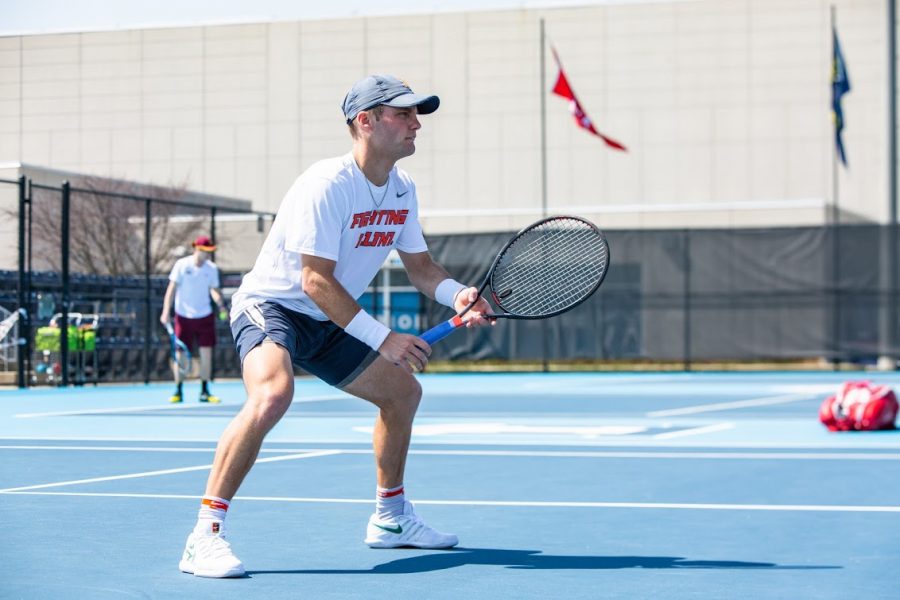 Senior Zeke Clark waits for the serve during the match against Minnesota April 4. Clark recently secured his 100th career singles victory, becoming the 16th player in program history to reach that mark.

Tennis is mainly reactionary. Control can be hard to come by, and as Zeke Clark will admit, coming to terms with that hasn’t been so natural for him, especially in his early years at Illinois. Throughout his five years on the team, he has developed a complicated relationship with that fact. Only after learning his role as an individual, both on and off the courts, did it click for him. When that happened, his game clicked, too.

On Sunday at Nebraska, Clark clinched his 100th career singles victory, becoming the 16th Illini in program history to do so. Though he is “privileged” to be recognized among a decorated group of guys, Clark isn’t one to dwell too much on his personal accomplishments. In fact, he didn’t even know he was playing to achieve that milestone until head coach Brad Dancer mentioned it.

“All I care about is doing what I can to put my team in the best position,” Clark said. “For me, personally, that’s making sure I’m prepared, doing my best to put my point up on the board, whether that would be singles or doubles. At the end of the day, if I can do that, that’s all I care about.”

True to the nickname used by his teammates to describe his gritty style of play, “All Day Zeke” delivered for the Illini against the Cornhuskers. In a straight-set victory, he grabbed the first singles point and joined the 100s club after defeating Albert Sprlak-Puk 6-2, 6-0.

“Gosh, I don’t know,” Dancer said as he tried to explain how he felt watching Clark’s monumental win. “I got a tear in my eye yesterday and felt like an idiot, but Illinois tennis is just lucky to have him. Everything else I try to say sounds superlative and too cliche-ish. I think the best thing I can say is just … Illinois tennis is so fortunate that Zeke Clark chose Illinois, and we’ve had the opportunity to have him on our team.”

Having known Dancer since 2013, which was well before he committed to Illinois, Clark’s relationship with his coach runs deep. It’s no secret that Clark puts a lot of pressure on himself for the sake of the team, so when his first few college seasons weren’t going as well as he had hoped, his belief in himself waivered. Still, Dancer recognized his potential.

“He cares so much,” Dancer said. “Early on in his time here, he just put such an immense amount of pressure on himself; (It’s) almost impossible to describe how much pressure he would put on himself when he was playing for the team, and it’s just been a daily conversation with him about, ‘You’re just an incredible young man. You don’t need to do more.’

It was through this learning process that Clark grew into the individual and player he is now. He has become known as the “emotional leader” for the team, the one people look to for motivation and energy, and he prides himself on the role. Usually being the first one on the court and the last one off, Clark has worked hard, which has manifested into stronger serves, strategic returns and quicker transitions within plays.

“This season, I didn’t really try to put too many expectations on myself,” Clark said. “I just feel very lucky to have the opportunity to play for Illinois again, and I feel like that’s kinda allowed me to free up.”

As he finishes his final season after opting to take the COVID-19-induced extra year of NCAA eligibility, Clark is 13-0 in singles and 11-0 in doubles, and like his 100th win, he doesn’t pay attention to the record books or the undefeated accomplishments.

Instead, Clark would rather draw attention to another historical achievement earned Sunday when Illinois claimed the Big Ten West division championship title. The team collected a share of it Friday when it beat Iowa 5-2 but clinched the honor outright at Nebraska.

Clark’s clutch performance was one of the three singles matches, alongside the doubles point, that helped Illinois secure the 4-0 sweep. Dancer says this title was a long-time coming for this team.

“Last year, you know, it’s funny,” Dancer said. “Everybody was talking about what a disappointing year we had. I really felt like at the end of the year, we were on a great track.”

Before the pandemic cut the season short, Illinois sat on a 5-6 record and had won four of its last five matches. When Dancer heard four seniors were coming back this year in addition to his recruits, he knew Illinois’ future looked promising. Now, coming of the weekend, the Illini hold a 16-2 record, are riding a 12-match winning streak and have the Big Ten West division championship to show for their hard work.

While all of Sunday’s matches were exciting to watch for Clark, one in particular resonated with him:Hunter Heck’s 6-1, 6-4 win. When the season started, Clark took the freshman under his wing, and their relationship has transpired into a bond and given rise to their seven-days-a-week session of “mental training.”

To Clark and Heck, mental training is all about consistency. They work out for 30 to 45 minutes, focusing in on physical and mental discipline, and confidence has stemmed from their fitness. Their sessions started late February after Heck lost a three-set match in his home state of Minnesota.

“He’s young,” Clark said of Heck. “He’s 18 years old. I’m 22. I’ve been in college for a half-decade longer than he has, got a half-decade longer of experiences. I’m not saying that I’ve been perfect. I’ve been anything but perfect but … you could just see, in the match, the ups and downs that he was battling mentally, and I told him, ‘I wanna help you,’ and we started mental training every day.”

Clark sees a piece of himself in Heck in the way he carries himself, especially in how he handles tough losses. The way losses weighed on Clark has been the same for Heck. But with time, just as Clark has gotten better, so has Heck, and mental training has guided that development.

Just as his teammates rely on him, Clark depends on them, too. He attributes every players’ dedication day-in and day-out to Illinois’ successes.

But, as a whole, the team is hungry for more with the Big Ten and NCAA tournaments approaching. And judging from their leadership and foundation, it seems like those goals may not be too far out of reach.

“I think there’s still another gear that we can find,” Clark said. “We still have a couple weeks to keep sharpening things, and that’s another thing about this group. Everyone, across the board — it’s not that we’re disappointed with where we’re at. We’ve had a good run, but we’re still very hungry, and we know what’s left to play for.

“I have full belief in myself and the guys to go out there and take care of business.”