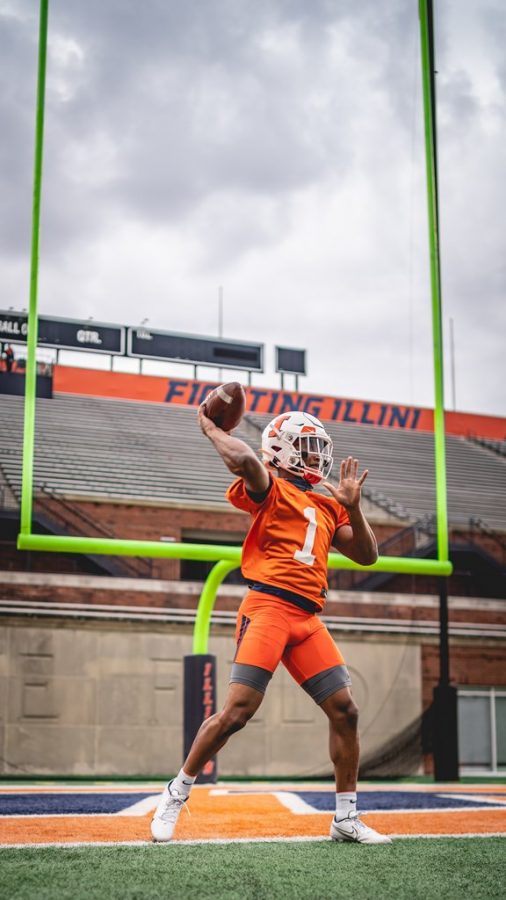 On a football field, the most important player is the one under center at quarterback. For the Illini, who have two players with starting experience at the position, there is a seemingly tight battle for the quarterback spot.
Senior Brandon Peters and redshirt freshman Isaiah Williams both started — and won — games for the Illini this past season and are set for a long battle throughout the spring, and potentially the beginning of fall camp, to earn the starting spot. There seems to be no clear frontrunner at the moment, as both guys have been put as the starter at different times during camp so far this spring.
“Me and Isaiah … we’re taking the reps as we go,” Peters said. “They’ve been pretty even so far between (us), getting the one and the two reps, it’s pretty much even. But I mean your reps are limited throughout practice, so you’ve gotta make the best out of ‘em … We’re both getting really good coaching, so the sky’s the limit.”
Peters was Illinois’ starter back in 2019, starting each game he was healthy, leading the team to a Redbox Bowl appearance. That season he threw for 1,884 yards, 18 touchdowns and eight interceptions in 11 starts. He also added 213 yards and three touchdowns on the ground.
In 2020, Peters was sidelined for three games after testing positive for COVID-19 one game into the season. He started each game he was healthy for, aside from the season finale at Penn State. That season, he threw for 429 yards, three touchdowns and no interceptions while adding 136 yards and a touchdown on the ground. He has a career completion percentage of 53.5%.
Williams appeared in four games in 2019, which allowed him to declare a redshirt season in his first year as an Illini. In 2020, he started two games but was sidelined for two games due to contact tracing from Peters. Williams was impressive in his first career start, as he broke the school’s single-game quarterback rushing record and lead Illinois to its first win of the year at Rutgers. He also made multiple big throws and was key in the final drive of the game, leading Illinois down the field for an eventual game-winning field goal by James McCourt.
Williams came in to replace Peters in each of the last two regular-season games of the year, throwing for a touchdown in each but was replaced by Peters after starting the season finale at Penn State. Williams threw for 393 yards, four touchdowns and two interceptions last season while adding 389 yards and a touchdown on the ground.
With bright spots shown in the past for both quarterbacks, there is a lot each of them can do to improve their game and win the starting spot.
For Peters, his accuracy will always be a point of emphasis, and he mentioned footwork being something he’s focusing on this spring. Another aspect offensive coordinator Tony Petersen wants to see improvement is Peters’ leadership. Peters has always been on the quieter side, and Petersen knows vocal leadership is one of the most important parts of being a starting quarterback.
“(Petersen) was just explaining to me that you can’t be a successful quarterback and not be vocal,” Peters said. “In this spring ball, he’s really pushed me to bring a little vocalism out of me, and so far it’s going good, but I still have steps to go.”
For Williams, who has the potential to be one of the best dual-threat quarterbacks in the conference, consistency is key.
For someone that has shown bright spots both in the air and on the ground on multiple occasions, staying consistent is what Williams thinks will improve his game the most.
“I’ve gotta become more consistent, and that just comes from putting in the work every day,” Williams said. “Physically, I don’t think there’s really too many things I can’t do on the football field; it’s just the mental that kinda stops (me).”
Both quarterbacks know there is a competitive battle going on, and the spot will remain up for grabs until someone proves they’re better. Petersen has an offensive plan no matter who the quarterback is, but until that’s determined, Peters and Williams will keep battling.
They have both expressed their respect for one another. Peters has complimented Williams’ game, specifically how hard he sees the younger quarterback work.
“He’s a super hard worker; he’s a very coachable kid,” Peters said. “He listens, he takes good notes, he transitions things from what we learn in drills to what we do in the scrimmage. I think Isaiah is gonna be a great player … He’s definitely gonna be an older guy that guys look up to on this team.”
Williams also has high praise for Peters, mentioning how he has learned from him and how the two communicate every day.
This quarterback race is expected to last through the spring and most likely end shortly before the first game of the season in the fall. Peters and Williams will have their first chance to compete against each other in the spring game April 19, though they will more than likely keep battling for the starting gig for several months.