Illini to compete in NCAA Championships as 8-seed 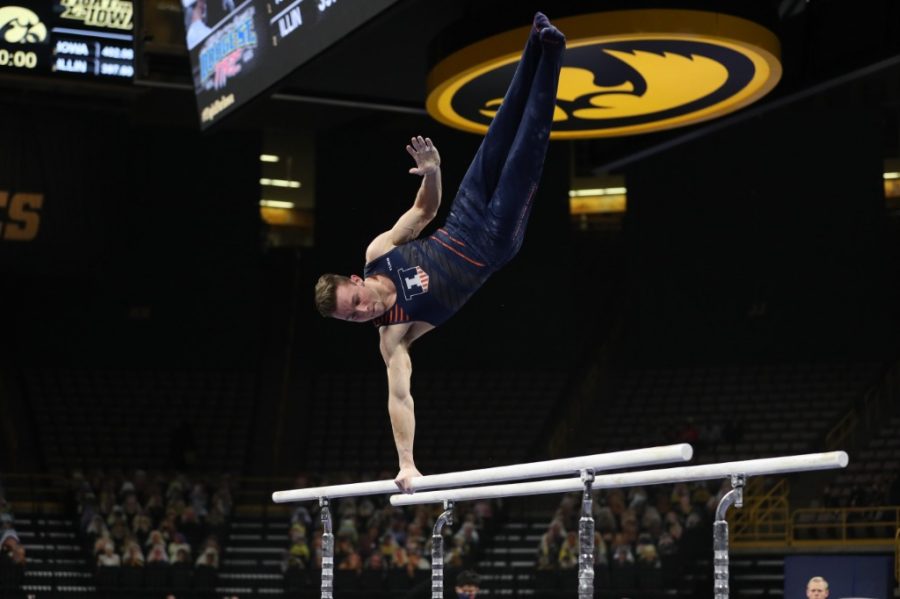 Junior Michael Fletcher performs a routine on the parallel bars against Iowa on Feb. 13. The Illinois men’s gymnastics team will compete in the NCAA national championships this week as an eight-seed.

The Illinois men’s gymnastics team has only one weekend of competition left in its season. It’s the weekend the Illini have spent the entire season preparing for: the NCAA men’s gymnastics national championships.

“We put the NCAA championships right in the center of the bullseye for team goals,” said head coach Justin Spring. “This is the big weekend that we all look forward to. It’s the culmination of year-round dedication and hard work, and it all comes together this weekend.”

Illinois is one of 12 teams in the nation, including all seven Big Ten teams, to qualify for the championships. As the 8-seed, Illinois will compete in qualifying session I on Friday afternoon, facing No. 1 Oklahoma, No. 4 Nebraska, No. 5 Ohio State, No. 9 Navy and No. 12 William & Mary.

“Oklahoma is a really intense team,” Spring said. “They’re good, and then it really comes down to Nebraska, Ohio State, us and Navy. Any one of those programs can sneak into the two and three spots.”

Illinois has made it to the championship session in 16 of the last 17 years, and Spring believes his team is capable of doing it again.

The team will get a boost to its score on Friday when Hamish Carter makes his return to competition. Carter spent the team’s final regular season meet and the Big Ten Championships on the sidelines with a nerve injury in his neck. On Friday, he’ll compete on pommel horse, vault, parallel bars and high bar.

“Having Hamish on any of those events is a game changer,” Spring said. “You’re putting in a proven hitter and taking out someone who may have had mistakes in the past. It gives our team more confidence and also three or four points.”

Those three or four points can make a difference in meets, as three more points in the Big Ten Championships would’ve vaulted Illinois from fourth to second place.

The Illini enter the NCAA championship weekend with a number of individual accolades. Five Illini received a total of six regular season All-American honors from the College Gymnastics Association: sophomore Connor McCool on floor exercise, junior Ian Skirkey on pommel horse, sophomore Evan Manivong on vault, graduate student Danny Graham on still rings and Carter on high bar and in all-around. After the Big Ten Championships, Graham, Manivong and McCool are still ranked in the top eight of their respective All-American events, as is junior Michael Fletcher in all-around.

McCool (on floor exercise) and Fletcher were also named finalists for CGA Specialist of the Year and MVP, respectively, while freshman Logan Myers was named a finalist for CGA Rookie of the Year.

After a long season of adhering to COVID-19 protocols that restrict where they can go and who they can interact with, the team is excited to be competing in the NCAA championships, but they’re also excited to get past the championships and experience “regular life” in a pandemic.

“It’s been an incredibly difficult year, and they are looking forward to being able to loosen up the strings and quarantine pieces,” Spring said. “This is the light at the end of the tunnel.”

Qualifying session I can be streamed live for free on Big Ten Network+ starting at 1 p.m. on Friday, followed by session II at 7 p.m. The championship session will be broadcasted on the main Big Ten Network on Saturday at 7 p.m.