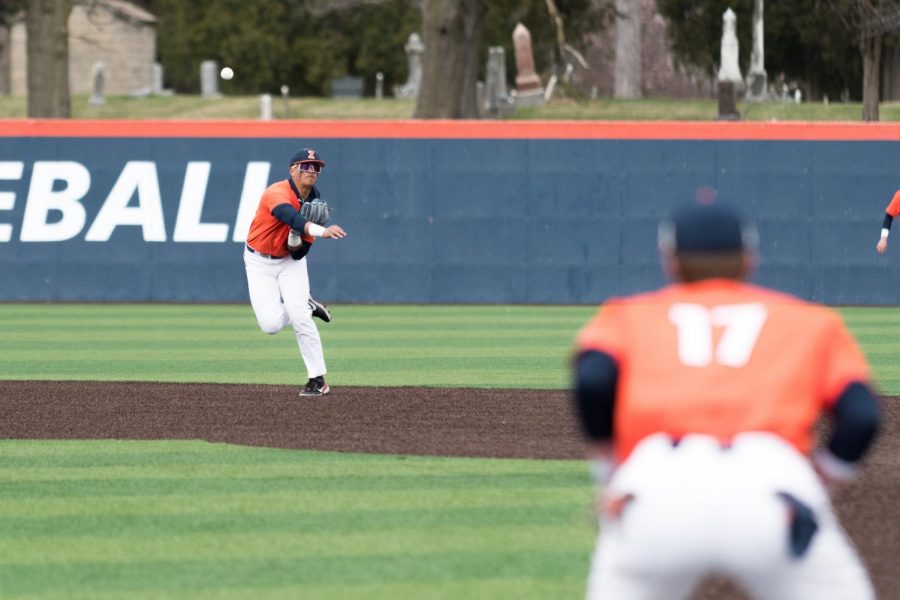 Sophomore shortstop Branden Comia fields a ground ball at a game against Northwestern on March 28. The Illinois baseball team will play four games this weekend against Purdue and Michigan State at Illinois Field.

In this COVID-shortened season, pods are only played on the weekends, allowing the Illinois baseball team to receive an ample amount of recovery time. The elimination of the midweek games lends the Illini four days for treatment, practice, scrimmages and off days. After three straight games over the weekend – sometimes four – the Illini receive Monday off to decompress.

The Illini (8-12) are coming off a shortened two-game series against the Indiana Hoosiers. In their first away pod in three weeks, the Illini dropped both games, including having no-hits in Saturday’s contest.

The team had been itching to get back out on the field after waiting around two hours for an updated start time last Sunday, only for the game to get postponed due to rain nine minutes before the first pitch was set to be thrown.

Comia – who was smacking 58% of balls thrown his way before this weekend – fell into a rut with the Hoosiers’ pitching staff, going 1-for-8 over the two games. While he couldn’t connect this weekend, Comia is still batting (.474) for the season.

Even more impressive is his fielding percentage of .966, which has been severely overlooked. Comia’s double plays and excellent fielding near second is partly what garnered him the ranking of fourth-best shortstop in the conference, according to D1Baseball.

“It really started when I was younger,” Comia said. “My dad always told me hitting will always come and go – that’s just the way baseball is – but defense should never be a thing that you struggle with.”

The Illini will continue to lean on Comia’s fielding ability on the defensive side of the ball in anticipation of their four-game series against Purdue (6-15) and Michigan St. (11-11) at home this weekend.

After recording the first no-hitter in Illinois history, the Illini batters are feigning to let loose at home against the Spartans Friday and Saturday. Second out of the dugout is the team’s darkhorse of the season, Jackson Raper, who has hit six homers over his last eight games.

“He’s got a maturity,” said head coach Dan Hartleb. “He’s a very hard worker. Great teammate, great person. He’s been awesome to have around. And then you combine that with the fact that he’s a really good hitter and has worked extremely hard to have success. It’s a situation where he’s been really, really good for our offense.”

This is the second matchup between the Illini and Spartans this season. The last time Illinois faced two teams within one pod, they won the front and back ends of the weekend. Saturdays are the most difficult, facing two different teams within one day.

This pod’s games, however, have been spread out over a four-day period. Not having to face both teams in one day will be a nice relief for the pitching staff after giving up 11 runs against the Spartans in their doubleheader on March 20.

“It’s no secret that we struggled out of the bullpen, but I’ve been really pleased with the work ethic I’ve seen out of that entire group,” Hartleb said of last weekend’s outing. “They’ve made some adjustments as far as some things mentally and physically to work down in the zone a little more and make a concerted effort to do that.”

The Spartans enter Illinois Field with a 4-3 record over their last seven games. Purdue enters with a 3-4 record as opposed to Illini’s record of 2-6. Illinois will need a huge momentum change this weekend heading into the second half of this season. Both teams offer great opportunities for a multitude of Illini pitchers to get game reps at the plate.

Monday’s scheduled off day for the team is cut this week to allow for a back-to-back series against Purdue Sunday and Monday.

While Purdue’s record of 6-15 is not daunting at first, it returned over half its team that was at Illinois Field last year and swept by Illinois. The Boilermakers remember.

The starters on the mound for the Illini in the back half of the pod will have to continue curbing the opposing hitters through the first four innings to give the Illini bats their turn to do their thing.

While the Illini pitching staff’s consistency has been called into question this season, what can’t be questioned is how they open up games. In the first four innings of each game against the Hoosiers this past weekend, the Illini only allowed one total run.

Right-handed pitcher Andrew Hoffman will get the start on the mound for the Illini this weekend. Hartleb will place left-handed pitcher Nathan Lavender, who has the fourth-best ERA (2.46) in the Big Ten, on the bump Sunday.