Illinois closes out regular season with trip to Indiana 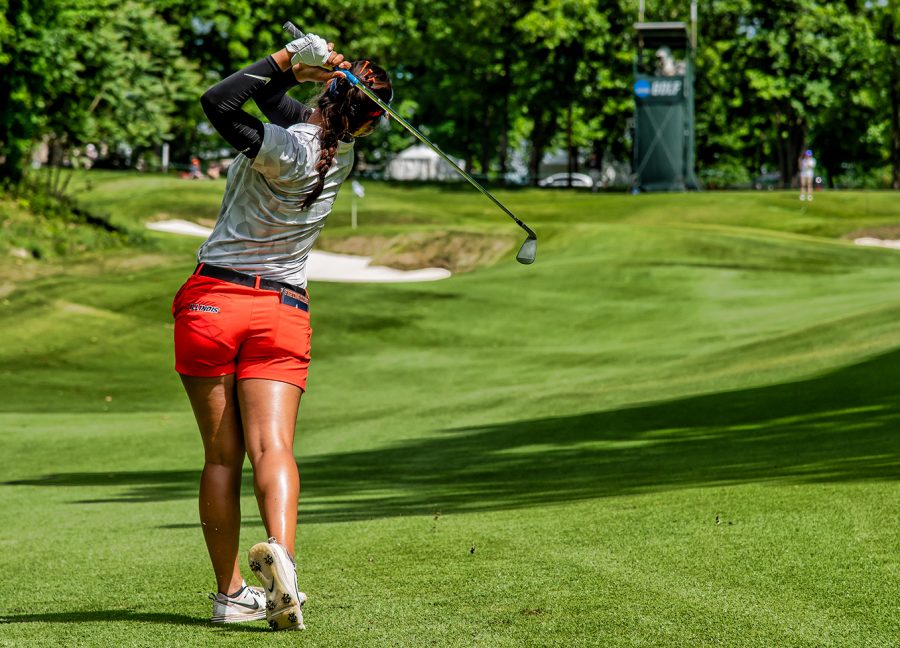 Junior Crystal Wang finishes a swing on a sunny day. The women’s golf team will play their final regular-season tournament of the year this weekend in Bloomington, Indiana for the Indiana Invitational.

The Big Ten Championships were less than two weeks ago, and time is winding down for the Illinois women’s golf team to get in its final regular-season preparation.

After finishing in fifth place at the Clemson Invitational, the Illini will be traveling to Bloomington, Indiana, for the Indiana Invitational for their final regular-season tournament of the year.

Senior Tristyn Nowlin is coming off of her best finish of the year after placing third with a score of -5 at the 54-hole event in South Carolina, which ties the best tournament finish of the season for the team and ties the eighth-best 54-hole score in Illinois history.

Junior Crystal Wang’s best performance came from the first tournament of the season, the Heroes Ladies Intercollegiate, where she finished fifth with a score of -5.

Before the pandemic cut the Illini’s season short last year, the team placed fourth in their final regular-season tournament of the 2019 season at the Lady Buckeye Invitational.

With much potential on the team, the Illini have a big opportunity to make a splash at this year’s postseason tournaments.

After the Big Ten Championships, the Illini might have a chance to advance to the NCAA Regional tournament.

The last time the Illini advanced to the NCAA Regional was in 2019 where they recorded the highest finish in program history, and the first time the team advanced onto the NCAA Championships.

Nowlin finished top 10 individually and tied for third in birdies while posting the best round of her career with 5-under par 67. Wang also finished the tournament with a +13.

The proof is in the pudding that the Illini are destined to make an impact at this year’s Big Ten Championships, but first, the Illini will have to battle it out in Indiana.