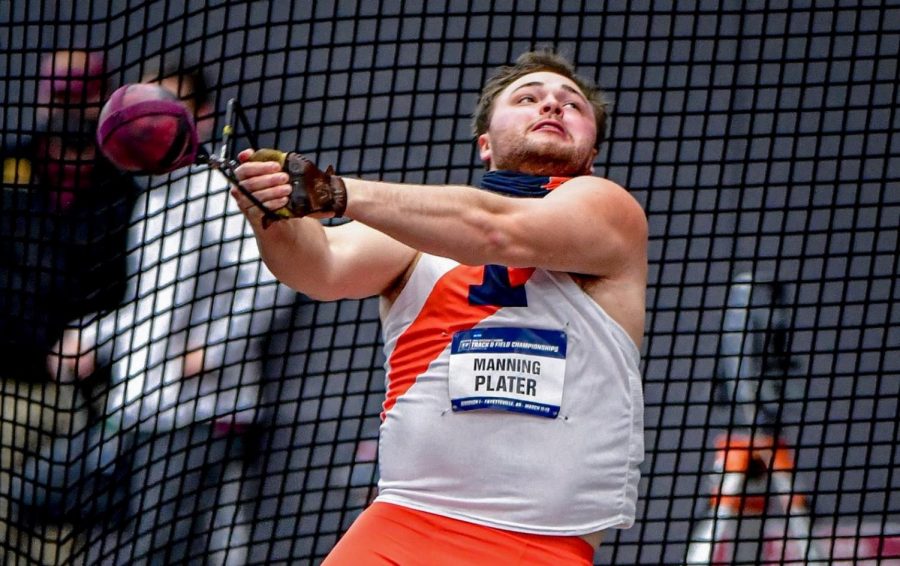 Manning Platter begins to spin during the indoor weight throw event. The Illinois track & field team will compete in Bloomington, Indiana again this weekend at the second Big Ten Invitational.

Last week’s track & field invitational was one for the ages, as the Illini won several events and broke school records. Members like Manning Plater, Chisom Nwoko and Amira Aduma represented the Illini with pride in Indiana Hoosiers territory, but they are not done just yet.

They will travel back to Indiana Friday to see how far their talent takes them.

“I know next week we will be back, so hopefully I can do it again,” Plater said. “I am happy about my performance today, and I am even more happy how everyone else performed.”

Both Plater and Jon Davis won Big Ten Athlete of the Week accolades last week, and with record-breaking performances and first-place finishes, the future looks bright for the men and women’s track & field teams.

Last year, COVID-19 took away the privilege of performing outdoors, where they are currently succeeding in this year’s season. The Illini look to continue their hot start to the season in two competitions this week, as the team will compete in both the Husker Big Ten Invite in Houston, Texas and the third Big Ten Invitational in Bloomington, Indiana.