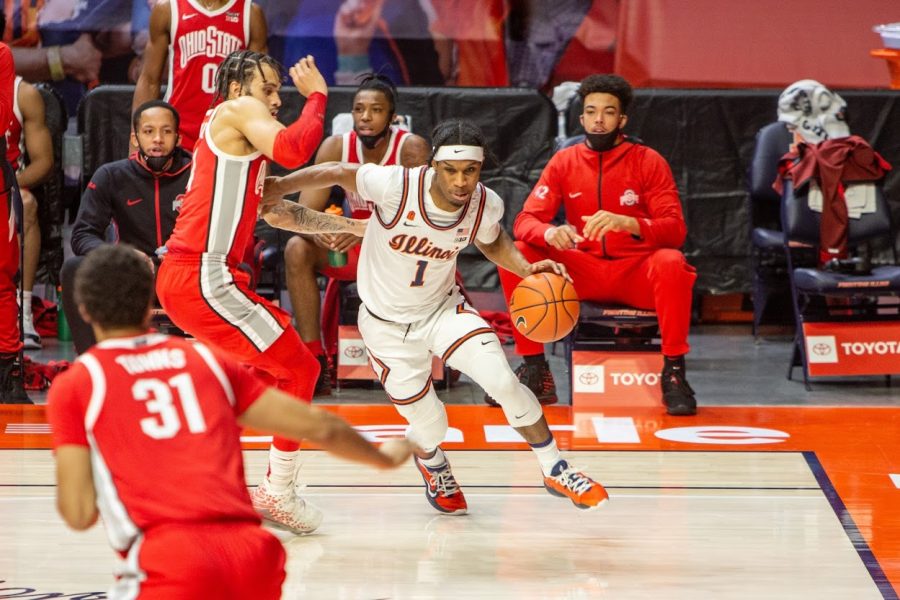 Senior Trent Frazier drives towards the basket during the game against Ohio State on Saturday. Frazier announced his return to Champaign Saturday afternoon.

Saturday was a big day for the Illinois men’s basketball team, as senior Trent Frazier announced he is taking advantage of the extra year of eligibility granted by the NCAA and returning to Champaign for a fifth season, while Utah transfer Alfonso Plummer committed to Brad Underwood and the Illini after opting to leave Salt Lake City.

After declaring for the NBA Draft April 9, Frazier decided to return to campus for one more year. The Florida native was huge for Illinois on both ends of the court last season, as he averaged 10.2 points per game and led the team with 55 treys, and he was named to the Big Ten All-Defensive Team for his gritty and determined defense.

Plummer, on the other hand, was one of the most in-demand transfers in the portal this offseason and is another big addition to the Illini backcourt. After averaging 13.6 points, 2.2 rebounds and 1.0 assists per game last season for the Utes, Plummer becomes the second transfer commit after Florida’s Omar Payne announced his commitment April 3.

Despite junior Ayo Dosunmu declaring for the NBA Draft, freshman Adam Miller transferring out of the program and sophomore Kofi Cockburn yet to decide on his intentions for next season, the Illini should be in good hands next year, especially after landing Wisconsin four-star Brandin Podziemski Wednesday.