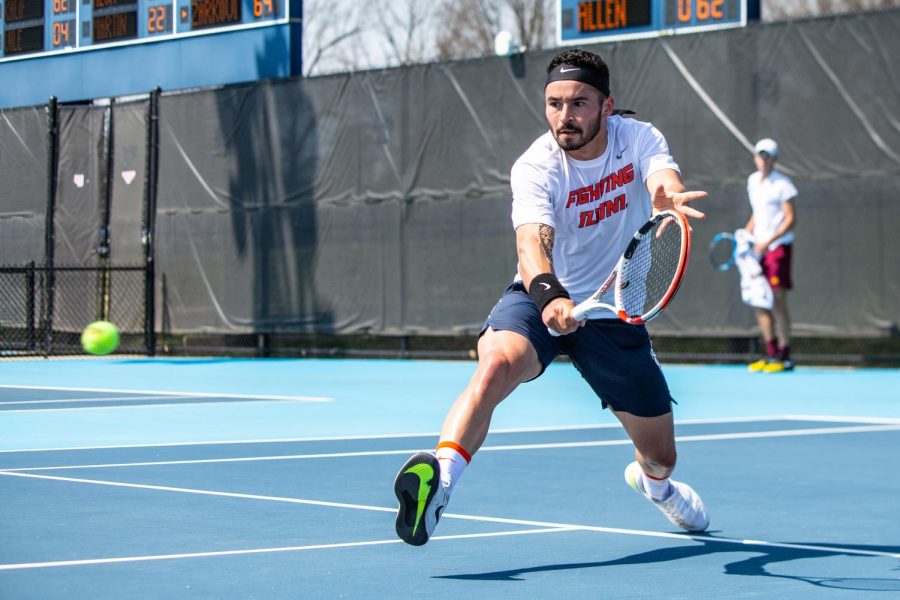 Senior Noe Khlif lunges to hit a ball in a singles match against Minnesota on April 4. The Illinois men’s tennis team will travel to Evanston, Illinois on Sunday to play Northwestern and hope to continue their winning streak.

The Illinois men’s tennis team is in for somewhat of a treat. After cementing their names as Big Ten West champions, the Illini get to have a little break, with their schedule easing up before the postseason starts.

The Illini have had most of their weekends filled with two matches, but they will ride out the last two weeks of the regular season playing once per weekend. Though the guys may be looking forward to it, head coach Brad Dancer teetered with the idea in his head, wondering if the break in their grind would benefit or disrupt their rhythm.

Illinois is red-hot right now. They have dropped only two matches, which have been to two top-10 teams, and will travel to Northwestern Sunday riding a 12-match winning streak.

The Wildcats are also on a winning streak of their own at four. In the Intercollegiate Tennis Association coaches poll, Northwestern stands at 39, while Illinois ranks at 11.

“I think they’re on a roll since we last played them,” Dancer said of Northwestern. “They’ve been incredibly competitive in all of their matches and, really, through the Big Ten, so it’ll be another great challenge for us, and I think our guys will be excited for it.”

Entering the match, Illinois has a well-established lineup they can lean on. Out on the fourth and fifth courts, Hunter Heck and Noe Khlif have been steadily pulling in consistent wins. Heck has won four of his past matches in straight sets, and after eight straight wins, Khlif holds a 9-1 record.

The No. 112-ranked Siphosothando Montsi started his personal-best season with a 12-0 singles record until a tough match at Minnesota took a crack at his momentum. Last weekend in Iowa, he fared close to regaining control but ultimately lost in three sets.

“I think Siphs took a little bit of a hit,” Dancer said. “I think he was really surprised against Minnesota that he wasn’t able to come back and get that match, and then sometimes, if you fester and think about things too much, it can play over, and I think that did a little bit at Iowa.”

Despite the momentary lapse in his game, Montsi seems to have regained focus with the help of Dancer. In his last match, Montsi was leading against Nebraska before it was called unfinished.

“Sometimes you really need something to shoot for, and I think with Siphs, we’ve got enough challenges coming up here as we move forward,” Dancer said.

Not only does Montsi have goals to shoot for, but the team as a whole does, too. The next one will be defeating the Illini’s in-state rival.

The match will start at noon Sunday in Evanston.