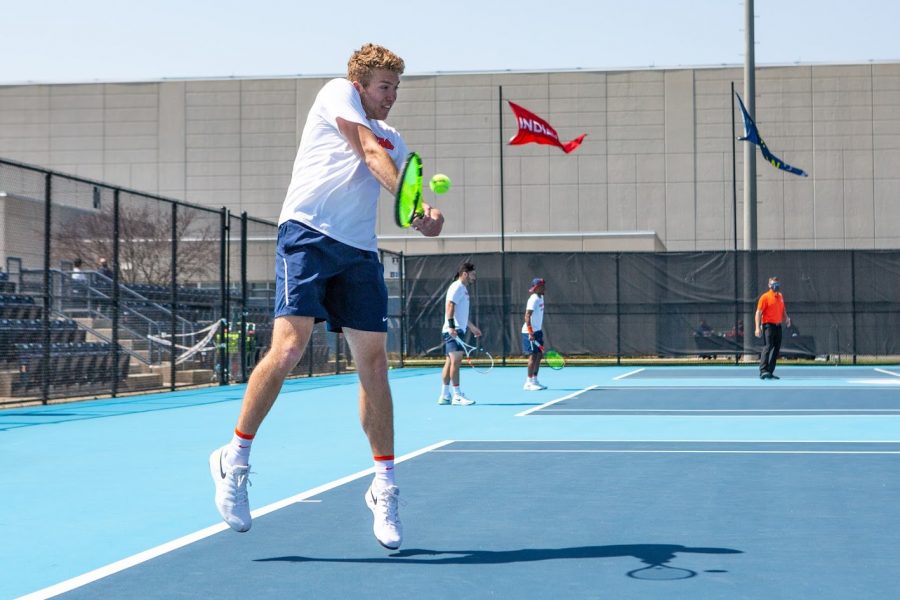 Junior Alex Brown hits the ball while competing against Minnesota on April 4. The Men’s Tennis team hopes to continue their winning streak for their upcoming games.

For the first time in 56 days, the Illinois men’s tennis team hovered on the brink of defeat while playing away at Northwestern.

The Wildcats got their game rolling after securing the first point by winning two doubles matches in a row. Alex Petrov and Vuk Budic lost 6-1 in their debut as a duo, and Noe Khlif and Siphosothando Montsi dropped their match 6-4.

Being down one point may not have been that worrisome for Illinois, as it was reminiscent of its previous match against Northwestern on March 14, where they also faced a couple of lackluster doubles matches.

But unlike last time, where the Illini picked up straight-set wins in all of their singles matches to take the victory, they found themselves in an unfamiliar situation, as they were slow to establish that same sense of momentum.

Out of the six matches, Zeke Clark was the only Illini to win the first set. Clark remained dominant throughout his second set and clung onto a substantial lead to tie the score at 1-1 after shutting out his opponent 6-1, 6-2.

As the rest of the matches unfolded, Illinois continued to face tough resistance. Northwestern won in straight sets against Alex Brown and Lucas Horve, which brought the score to 3-1 and left Illinois one match away from overall defeat. Despite these losses, head coach Brad Dancer stressed the inadvertent contributions they had on the proceeding matches.

The remaining matches left in play were those of Khlif, Montsi and Hunter Heck.

Despite losing the first set 6-1, Khlif remained locked in to pull off a 6-3 second set. He was then neck-and-neck with his opponent before he edged past with a 6-4 win in the third set.

“Noe (Khlif), he’s got all these skills; he does all these things, Dancer said. “Sometimes, just like any competitor, he gets some fears and he gets some doubts, and those things can easily take over. He did a good job of managing those, and at the end, he did fantastic in terms of how he finished it out.”

Montsi followed Khlif in a similar suit. After dropping the first set 6-2 and narrowly taking the second set 7-6, he convincingly controlled the third set, winning 6-3. Tying the score at 3-3, Montsi also pulled himself out of a runt as he has struggled the past couple of matches.

“I give a ton of credit to Siphs,” Dancer said. “(Steven) Forman played well. He put Siphs on the ropes and put him on his back foot. I think Siphs got a little more aggressive as the match went on and dictated a little bit more, and that was the difference in the end.”

Illinois and Northwestern both vied for the final point playing out on court five. Heck had lost 7-6 before he secured a 6-4 second set win, so the overall match was on the line in the tiebreaker.

“He’s got the ability to play better than he has,” Dancer said of Heck after acknowledging his rather slow start. “He continues to dig himself holes in matches, and he’s gotta learn how to come out early in matches and not dig those holes.”

Without hesitation, Heck put on a promising performance for the Illini. The freshman went so far as to lead 3-0 before etching out the clutch 6-2 win against his opponent, helping the team clinch a 4-3 victory over Northwestern.

The Sunday match is marked as the closest one of the season and brings the Illini to 17-2 record with a winning streak of 13.

“It was awesome,” Dancer said of the competition. “We’ve had a number of matches for an extended period of time where we’ve sort of been in control … and this match, there’s no question about it: Northwestern wrestled control with it. They made it really, really difficult, and our guys had to — to be honest — get down to the very nitty gritty of things to pull that one out.”