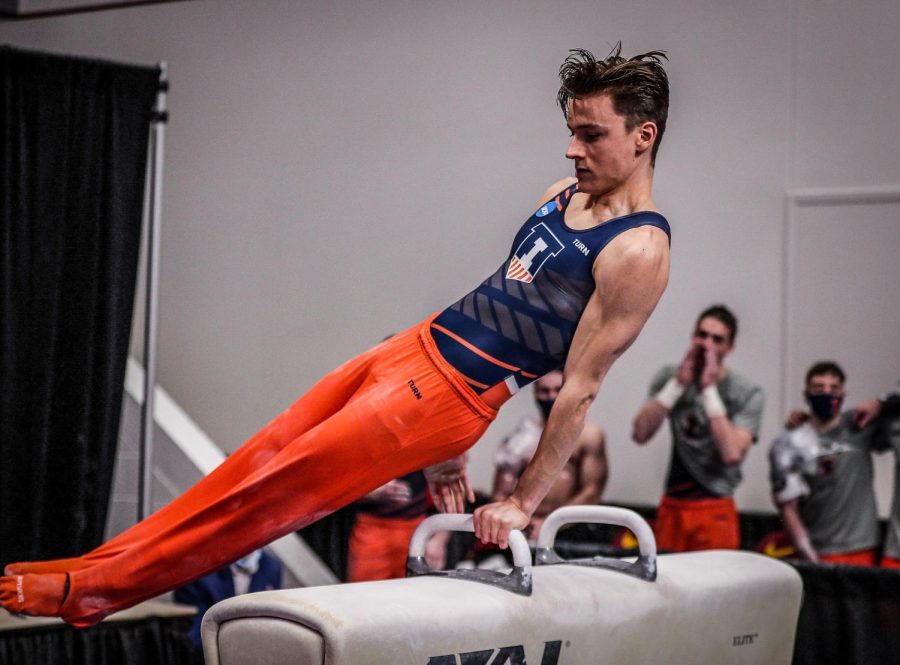 Though neither day saw Illinois’ best team performance, the highlight of the weekend was in individual competition, in which junior Ian Skirkey won the pommel horse national championship.

Every gymnast hopes to win a team or individual national championship at some point in his career, but the most basic goal is simply to do one’s best in competition. That’s exactly what Skirkey wanted to do in Minneapolis.

“From the start, I never really had any strict expectations for my performance,” Skirkey said. “I just wanted to go out there, do the best that I could and keep myself calm leading up to the routine.”

That score turned out to be 13.801. Skirkey’s strongest competitors didn’t have stellar performances, and the winning score was set relatively low for him.

“The door was wide open on pommel horse,” said head coach Justin Spring. “Ian was basically the last horse guy who had a chance.”

Skirkey stepped up and delivered one of the few pommel horse routines of the evening that hit, scoring 14.166. The performance earned Skirkey his first NCAA championship and gave Illinois its first pommel horse championship since Brandon Ngai’s in 2016.

Upon dismounting, Skirkey and his teammates knew his performance had very likely won him the championship.

“It was very close to how my day one performance felt,” Skirkey said. “I was pretty certain that I had done it. I was absolutely elated.”

Skirkey was immediately hugged by assistant coach Daniel Ribeiro before heading over to the team’s corral for more hugs from his teammates. He described the mood as one of “pure euphoria.”

“They acted like they had just won the national title,” Spring said. “I think the team needed a routine like that because it was a rough day. At that point, the team wasn’t in contention for anything other than the place we were (already) in.”

The Stanford Cardinal won its second consecutive team championship with a score of 414.521, defeating second place Oklahoma by almost three points and defeating Illinois by more than 16 points.

The Illini struggled for much of Saturday, with rocky rotations on still rings and high bar. Though the team had a good vault and “one of the better” parallel bars rotations, Spring said the team could not gather any momentum, alternating between hits and falls.

It was an uphill battle for the Illini the entire weekend, as the team’s roster was severely depleted by injuries and unavailabilities. Had the Illini been at full strength, Spring believes they would’ve been capable of not only keeping pace with the top three — Stanford, Oklahoma and Michigan — but possibly defeating them.

But getting to Saturday is a victory in Spring’s view.

“Qualifying for the second day is a big deal,” Spring said. “It was against a pretty stacked field (in qualifying session I). Can’t say I was happy with how Saturday went, but just being there was a feat in itself.”

Despite the result in the team competition, the Illini did have a few bright spots in the individual competition. Accompanying his national championship on pommel horse was an All-American accolade for Skirkey. Sophomore Connor McCool earned an All-American accolade on floor exercise for finishing sixth in that event. Junior Michael Fletcher set a career-high on floor exercise Saturday while claiming event titles on parallel bars (his first ever) and vault Friday.

It’s not the individual and team results that Skirkey is happy about, but rather the way his team competed this weekend.

“Throughout both days we were able to keep positive energy to make sure guys were poised to perform at a high level,” Skirkey said. “We’re very happy to have made day two and that was about as much as we could ask for. We weren’t expecting to come out on top, but we were going to fight, and we were going to do it with attitude, and I think we were able to do that.”