Illinois bounces back in series win against Purdue 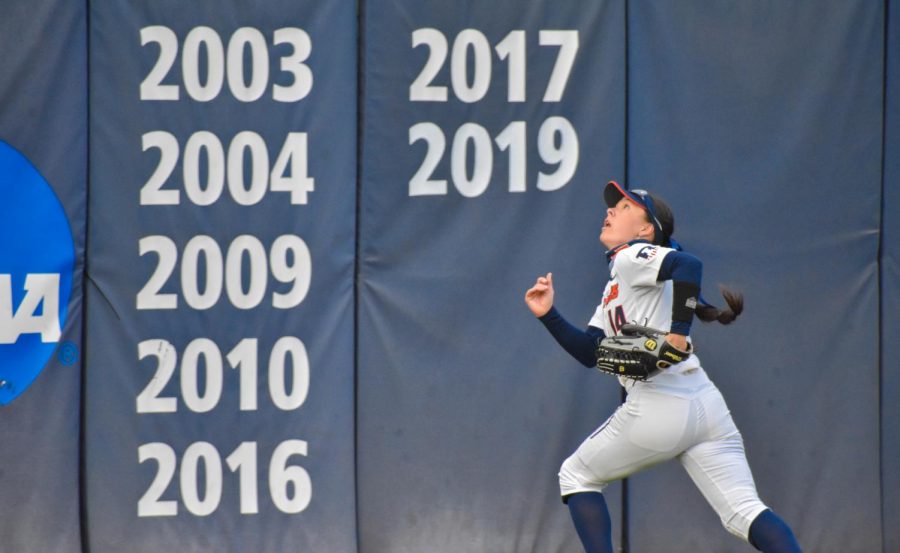 Sophomore Kelly Ryono scans the sky for a ball at a game against Purdue on Friday at Eichelberger Field. The Illinois softball team defeated Purdue in their series this weekend in Urbana, Illinois.

The Illini’s bats heated up during the four-game series against the Boilermakers, despite Illinois falling in the series finale. Illinois ended its second series at Eichelberger Field with a home record of 4-4, contributing to their overall record of 18-10 and team batting percentage of .294.

Illinois took the series opener Friday evening, 9-3, along with both games in Saturday’s doubleheader —  4-1 in game one and 5-0 in game two. After a competitive game four, they dropped Sunday afternoon’s series finale, 4-6.

Though the Illini didn’t sweep the Boilermakers like they wanted to, they still made a statement: Illinois showed up, played their game and showed who they really are. Working as the cohesive unit, the team’s vitality and competitive excellence produced momentous results.

For a second series opener in a row, Illinois was led by sophomore Delaney Rummell at the plate, going 3-for-3 with a career-high five RBIs. Senior Bella Loya went 3-for-4 with two RBIs, with two of those hits consisting of her second home run and first triple of the season.

Rummell and Loya went a combined 6-for-7 with seven of the Illini’s nine RBIs. Junior Kailee Powell went 2-for-4 with two runs scored, while freshman Jaelyn Vickery also notched a two-hit game, going 2-for-4.

In Fridays night’s win, junior Sydney Sickels was dominant in the circle yet again, throwing 6.0 innings while striking out seven and giving up only three hits and one earned run. Freshman Morgan Scivally secured the win for Illinois, as she entered for Sickels in the seventh, recording a 1-2-3 inning.

Before, the team was having challenges coming out of previous doubleheaders victorious. Yet, with outstanding pitching and vigorous hitting, the Illini took both games Saturday. Illinois broke out the bats in both games, scoring nine runs on 13 hits.

During game one, Vickery crushed her first career home run, and Rummell hit her second home run of the season with a three-run shot, leading the team in RBIs this year with 19. Junior Addy Jarvis pitched 6.1 innings for the Illini, allowing just one earned run and six hits while striking out four. Jarvis improved to 5-3 after earning the win, and Sickels, who came in to record the final two outs, earned her second save of the season.

Game two was no different when it came to Illinois’ exceptional pitching. Freshman Tori McQueen moved to 3-3 on the season following her impressive performance. In the circle, she pitched a complete game shutout, allowing just four hits and walking none.

In the series finale Sunday afternoon, the Illini’s offense and defense fought hard against the Boilermakers. Junior Shelby Stauffenberg went 2-for-3, while Rummell continued to exert great force at the plate, going 2-for-3 with a double.

Sickels started in the circle, pitching 5.2 innings, giving up six hits and striking out four. McQueen replaced Sickels in the circle in the sixth inning, though she came out in the seventh after giving up a solo home run to lead off the inning. Powell tried to revive the offense, as she hit a two-out home run in the bottom of the seventh, but the Illini fell in the series finale.

As it moves forward, Illinois will face Indiana in a four-game series this upcoming weekend at Eichelberger Field in Urbana. The team is hungry. This past weekend it got a taste of the outcomes it has been trying to achieve, and it’s ready to continue to eat.