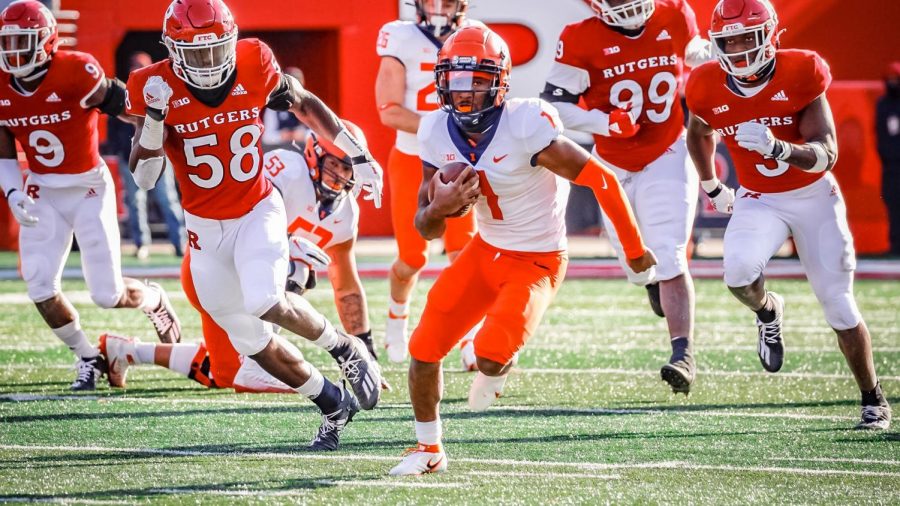 Redshirt freshman Isaiah Williams sprints down the field in a game against Rutgers Nov. 14. The Illinois football team will play its first spring game Monday with an almost completely new coaching staff and altered player positions.

The Illinois football team will get game experience for the first time since 2020 during its spring game Monday. With an almost entirely new coaching staff, position battles on both sides of the ball and newcomers hoping to make a difference, the Illini have a lot to look forward to Monday night.
Arguably the most anticipated matchup between two players right now is that of Brandon Peters and Isaiah Williams, the two quarterbacks battling for the starting spot.
Bret Bielema hasn’t released the rosters for the two teams yet, which will basically be a depth chart of starters and backups, but the one certainty on the roster will be Peters and Williams on opposite teams. The quarterback room has four players with at least some starting experience, but offensive coordinator Tony Petersen has made it obvious that it’s a two-man race at this point.
Peters and Williams both showed many bright spots last year, and two years ago in Peters’ case, but the one thing the two of them both have to work on is consistency. They’ll both get the opportunity to show how their games have evolved, and consistency will be something to look out for.
The spring game doesn’t determine the starting roster for the regular season in any way, but this will be Illini fans’ first glance at whoever the starter may be come the fall.
Another position group that hasn’t yet finalized its starters is arguably the strongest group on the team: the offensive line.
Alex Palczewski, Doug Kramer and Vederian Lowe are pretty much lock-ins at this point at right tackle, center and left tackle, respectively, but the left and right guard spots seem to be up for grabs. There are a number of contenders for the two spots, but one guy that people will have their eyes on is Julian Pearl.
Pearl came in last season to play right tackle when Palczewski went down, and he received praise from Lovie Smith and his staff for the work he did last season when the team needed someone to step up. Offensive line coach Bart Miller has complimented Pearl’s athleticism and has hinted at him potentially earning a starting spot at one of the guard positions, though he’s been practicing a lot at right tackle with Palczewski still recovering from his injury.
Blake Jeresaty, Alex Pihlstrom, Verdis Brown and Jordyn Slaughter are other contenders for the two open guard spots, with former FCS All-American Jeresaty another guy to watch out for as a potential favorite to earn a starting role.
One of the thinner spots on the roster at the moment is wide receiver after top target Josh Imatorbhebhe decided to forgo his final year of eligibility and enter the NFL Draft. After playing defensive back last year and being one of the highest recruits by Lovie Smith in five years, Marquez Beason has switched to wide receiver, and fans will get their first look at him in his new spot Monday night.
The switch came as a surprise to many, as Beason was a very talented and highly recruited defensive back coming out of high school, but Beason and wide receivers coach George McDonald have spoken on the move and like Beason’s fit there.
Donny Navarro and Brian Hightower will also be looking to make strides and improve enough to be the team’s top targets in the fall.
At tight end, Illinois has two talented players in Daniel Barker and Luke Ford. Barker caught significantly more passes last season than Ford and was one of the top targets for the quarterbacks all season long. Ford, though, could see more receptions in 2021.
The spring game will be a good chance to see how Petersen plans to use Ford, as he was used mostly for blocking last season. Ford has tons of skill and could be a dangerous piece if he also can be used properly as a receiver.
Defensively, the spring game will reveal a lot about two things: what scheme will be run and how the position adjustments are going for certain guys.
Defensive coordinator Ryan Walters has said multiple times that they’re not yet focused on one scheme in particular, but that they plan on mixing it up with a few. Walters has listed the “4-3”, “4-2-5” or a “3-4” as possibilities for schemes for next year. A little confusing to say the least, so Illini fans will get a true look at how the defense will shape up Monday night.
The defense also saw a number of position changes. Owen Carney, Seth Coleman and Isaiah Gay all moved to outside linebacker from the defensive line, an unfamiliar spot for the trio. But Walters clearly sees potential at OLB in each of them.
Carney, Coleman and Gay are all big, athletic guys that have a chance to thrive at outside linebacker. However, Carney was an All-Big Ten Second Team inclusion at defensive end last season, so the position change came as a small surprise to some. Either way, Carney, along with Coleman and Gay, will be able to show off their skills at a new position for the first time Monday.
The return of Jake Hansen at linebacker, a talented running back group and position changes at defensive back will be other fun things to look out for during the game. The game is set to begin at 7 p.m. Monday evening at Memorial Stadium and will be the final game-like feel for Illini fans before the season opener Aug. 28 against Nebraska.