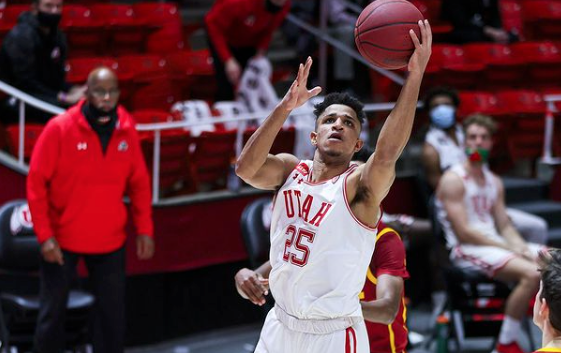 Senior Alfonso Plummer looks to make a lay-up against USC. He will now be joining Illinois for next year’s basketball season.

With Ayo Dosunmu entering the NBA Draft and Adam Miller entering the transfer portal, Brad Underwood knew he needed to add some scoring in the back court. He did just that this past weekend, adding Utah senior guard Alfonso Plummer. Here’s what the lefty can bring to Illinois.

Plummer, a 6-foot-1, 182 pound guard, spent two seasons at Utah after two years at Arizona Western College (juco). Plummer attended high school in Puerto Rico and was not in the national recruiting rankings. He started 16 of 25 games last season for the 12-13 Utes, and was the team’s second-leading scorer at 13.6 points per game.

Plummer brings most of his value on this end. He’s a dynamic shooter with versatility. Former Utah head coach, Larry Krystkowiak, loved to have Plummer run off screens to get a shot, and Plummer showed he can hit threes off the catch, off the move and off the dribble. He shot just 38.3% from deep, but there was plus volume (6.7 attempts per game) and he took some difficult ones.

Shot selection is a bit of a question mark. Plummer has a tendency to take some contested jumpers early in the shot clock, but he is capable of making them. When he’s on the floor, Plummer has a ton of shooting gravity that drags the defense out. He’s good at attacking closeouts, and while he didn’t get to the rim a ton, Plummer used his strength and leaping ability to finish there. He shot 57.6% at the rim.

Despite being 6-foot-1, Plummer is much more of a shooting guard and off-ball player than he is a point guard. Simply put, he’s a bucket-getter. His handle is pretty limited, and he’s very left-hand dependent. Plummer’s inability to put pressure on the defense means he only racked up 1.0 assists per game. But when he attacks off hard closeouts, Plummer is good at finding the open man.

Plummer’s lack of size makes it hard to be super impactful on that end. He lacks the natural instincts of someone like Trent Frazier. He posted a -0.6 defensive Box Plus/Minus, and that dropped to -1.0 in top-50 quality games. Plummer has strength for a guard, but his lack of height makes it hard to switch onto wings and bigs.

Now that Andre Curbelo is back for his sophomore season, Illinois’ roster is now crowded with guards, under 6-foot-2. Meanwhile, Trent Frazier utilizing his free year of eligibility. Plummer is the best pure scorer on the roster, but he could be asked to come off the bench given the continuity of Curbelo and Frazier. In certain matchups, all three could play together, but those minutes will probably be limited.

When he is in the game, Plummer will likely fulfill the role of the main scoring guard. Underwood will look to get him shots off the move, similar to what he saw at Utah. Playing alongside Curbelo should give him the opportunity to get more open looks.

Defensively, Plummer may not be asked to guard the opposing team’s best guard. In the big man-dominated Big Ten, he should be able to hold up against the off guard on most Big Ten rosters. As long as Plummer continues to produce on the other end, he should have a positive impact on next season’s roster.