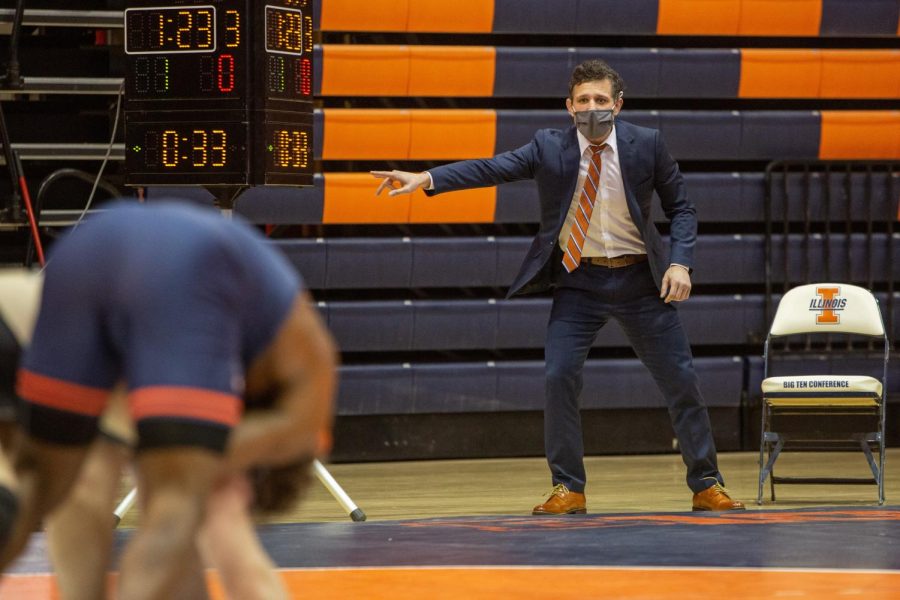 New head wrestling coach Mike Poeta instructs a wrestler from the sidelines during the meet against Purdue on Jan. 22. Poeta was previously the assistant coach for four years but was promoted after previous head coach Jim Heffernan retired.

Director of Athletics Josh Whitman sounded optimistic about the hire for the wrestling program and is hopeful the Illinois-alumnus can lead the team to new heights.

“We are thrilled to welcome Mike Poeta to our Fighting Illini head coaching family,” Whitman said. “Mike is a native of our great state, is a proud University of Illinois alumnus and is one of the most decorated wrestlers in our program’s rich history.”

During his time as a wrestler in Champaign, Poeta was a member of Illinois’ 2005 Big Ten title team. He also won two individual Big Ten titles, three All-American honors and was a two-time NCAA finalist.

After his collegiate career, Poeta spent three years wrestling professionally. He represented the United States in the 2010 World Cup in Moscow, Russia, and he participated in the 2012 Olympic Trials.

Before joining the Illinois wrestling staff for the 2017-18 season, Poeta created the Poeta Training Center in Lake Forest, Illinois. The training center coaches over 200 different wrestlers and has produced 19 high school and junior state champions.

After taking the assistant position at Illinois, Poeta has established himself as one of the top recruiting and development coaches in the nation.

“I am honored and excited to be the next head wrestling coach at the University of Illinois,” Poeta said. “It was an absolute dream come true to be part of this institution as a wrestler, assistant coach and now head coach. I have so much love for the wrestlers on the team, this program, this school, and this state. We have a great young team that can do great things.”