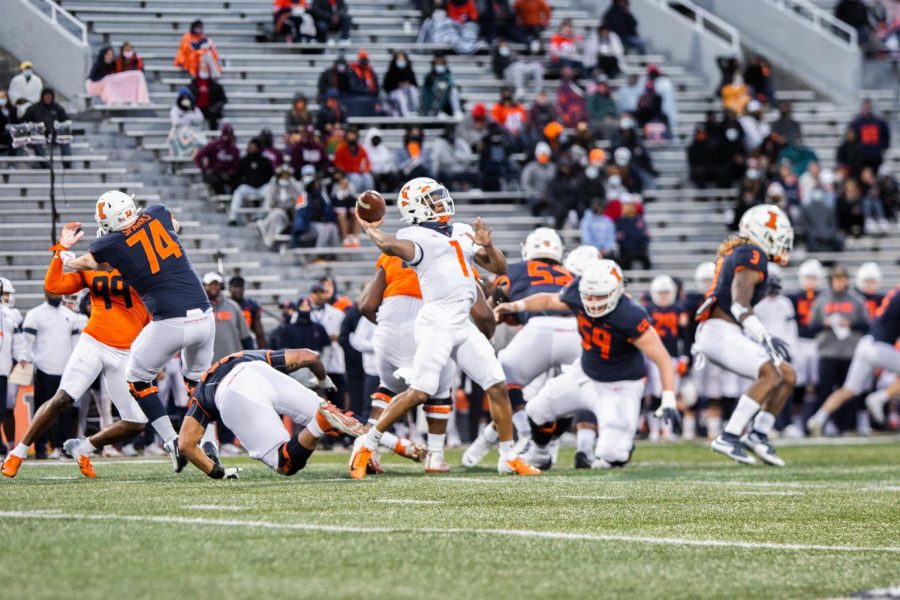 At the annual Orange and Blue spring football game Monday night, Illini fans got their first look at the quarterback battle between senior Brandon Peters and redshirt freshman Isaiah Williams.
Coming into the game, it wasn’t a surprise to many that Peters was placed on the first team, and Williams was put on the roster with most of the backups.
Offensive coordinator Tony Petersen has praised Peters on multiple occasions since arriving at Illinois, complimenting his size, strength and style of play, which led most to believe Peters would get the nod to be on the first team for the spring game. Peters also started each game he was healthy for the past two seasons, aside from the final game of 2020, so the coaching staff didn’t have any new game film to evaluate the two quarterbacks on.
Being on the first team definitely helped Peters Monday, getting to throw to the team’s top receivers and receiving the better protection from the offensive line. Despite having more talent to work with, though, accuracy cannot be taught, and that is exactly what Peters portrayed.
Peters only played the first half, but he went 12-for-18 and threw for 291 yards and a touchdown, adding one more score on the ground. His six incompletions included a drop in the end zone, but despite five true incompletions, Peters showed a lot of promise in his play.
He used his tight ends effectively, threw a beautiful over-the-shoulder touchdown pass to Khmari Thompson and threw accurate balls to Brian Hightower, Donny Navarro and Carlos Sandy.
“BP’s got exceptional arm talent,” said head coach Bret Bielema. “He’s a very accurate guy with the ball, and he’s been able to show that repeatedly now. Tonight I thought he took care of the ball, had good ball placement … BP is now learning to manage the game more effectively.”
Williams started out the night at a bit of a disadvantage but not only by being placed on the second team. He is also more of a running quarterback, which couldn’t be showcased during the spring game.
Quarterbacks wore a white jersey Monday night to avoid any injuries, and when the quarterback got close to a defender, the refs called the play dead. Williams didn’t get to run at all really, and he was stuck passing behind a second-string offensive line and to second-string receivers.
He completed a couple of passes with the second-stringers, but Williams was moved to the first team at halftime and looked better. Behind an offensive line that gave him some time to throw, Williams’ night was highlighted with a deep throw over the middle of the field that hit Navarro perfectly in stride, which was probably the best throw of the night.
“Isaiah, I was very pleased with what he did when he came in,” Bielema said. “Especially when he got behind that (first team) o-line and do what he did.”
Both quarterbacks had good moments, but Peters was the man of the night after an impressive spring game. Things could have looked differently if the roles were reversed, and it’s still only April, but Peters helped make his case to be the starting quarterback for the Illini come August.