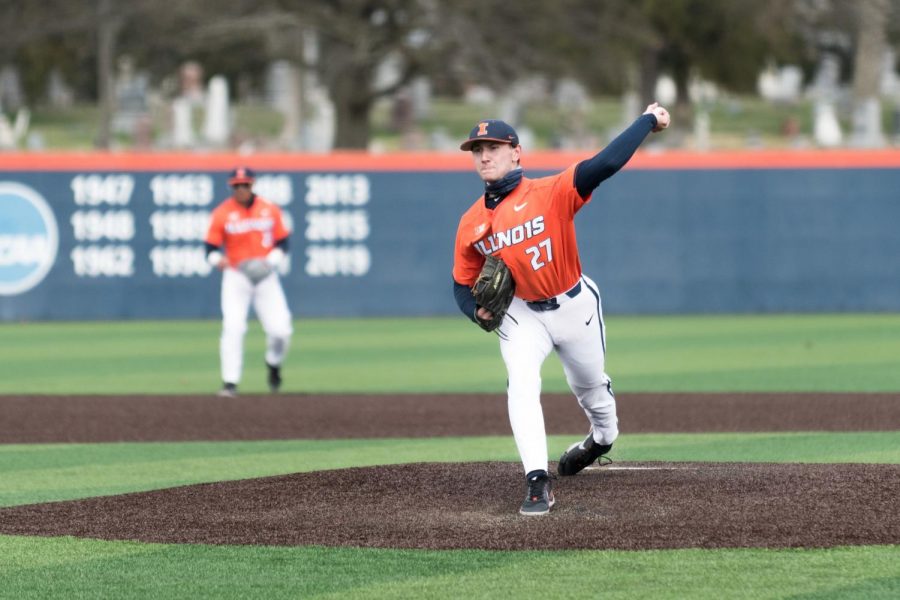 Sophomore Cole Kirschsieper pitched during a game against Northwestern on March 27. The Illini baseball team will head to West Lafayette, Indiana for a three-game series against Purdue this weekend.

For the second consecutive weekend, Illinois baseball will face off against Purdue, this time in a three-game series in West Lafayette, Indiana. The Illini are coming off a pod weekend at home where they won two games against the Michigan State Spartans but dropped both games against the Boilermakers Sunday and Monday.

Illinois has struggled with pitching all season, but the Boilermakers beat the Illini Monday by the largest margin (14) this year despite ranking No. 8 in hitting and No. 11 in pitching in the Big Ten.

The biggest issue with the pitching staff has been lack of experience. The most experienced college pitcher on the team is Andrew Hoffman, who just transferred to Illinois this season.

“A lot of our guys are inexperienced, and even if they’ve been here for two to three years, they haven’t seen that many innings,” said first baseman Kellen Sarver. “So there’s definitely a learning curve with that, with not having guys on our staff who’ve been here awhile or pitched in a lot of college games.”

Though the back half of last weekend doesn’t show it, pitcher Cole Kirschsieper said the bullpen has made significant progress in the past couple weeks during practice. Kirschsieper showcased that improvement against Michigan State Friday, as he came in as relief after three innings and allowed just one hit and zero runs to secure the win.

“Some guys come in early and work with Coach Allen and then some guys stay after,” Kirschsieper said. “We did different drills to help us. One of the big things Coach Hartleb told us is the reason why our pitching staff isn’t performing at its highest level is because we’re leaving the balls up and over the middle of the plate, which allows hitters to easily see it and make contact, so his big thing is pitching down.

“So we’ve set up strings in the bullpen to pitch down to allow our eyes to see where the ball is exactly when it crosses the zone. That’s the biggest thing that helped us this weekend is our bullpen’s improved a lot.”

Sunday and Monday, however, Kirschsieper said Hartleb explained to the group they didn’t come out to attack hitters and get outs, rather they would just “throw the ball and see what would happen.”

Purdue will have to see some new faces on the mound this weekend as Hoffman, Nate Lavender and Riley Gowens were announced as Illinois’ starters. Gowens did face the Boilermakers Sunday, but he gave up just three hits and two runs through five innings.

Despite ranking second in the Big Ten with a team batting average of .289, the Illini struggled to keep up with the Boilermakers’  offense, scoring just 10 total runs. Sarver — who went 9-for-16 with a double, home run and five RBIs over the weekend — believes the past weekend was “just a fluke.”

While jumping out to an early lead against the Boilermakers’ inconsistent pitching is the goal, the Illini are confident in their offense to keep any game within reach.

“We never get down on ourselves, no matter what the situation is,” Sarver said. “We have a mindset that even if we get down in the first inning, we’re not going to let that dictate the momentum of the game. We’re going to come out each and every pitch and try and be our best and get the lead back. Getting that lead will help our pitchers throw with confidence.”