Illini use golf as escape from stress during pandemic 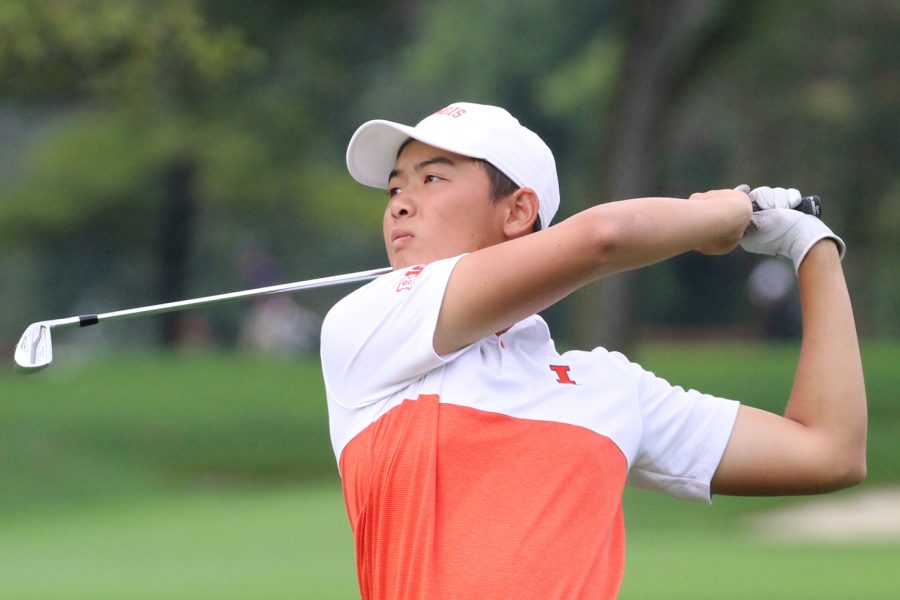 Sophomore Jerry Ji observes as his ball flies through the air during competition. Ji and other members of the men’s golf team have used golf as an outlet for stress relief during the pandemic.

Golf is an inherently mental sport. Without defenders waiting to swat putts off the green or raucous crowds whose only goal is to overload auditory senses, all that’s left is the golfer and their mind.
It’s important for golfers to stay calm and focused, but it’s becoming increasingly difficult for all of us to do so this year.
“(COVID-19) has had implications on a lot of people, people close to me,” senior Michael Feagles said. “I’ve seen it, just the way you get kind of stuck in quarantine and the inability to go outside as much and live your life the way people are used to living it.”
Feagles is right. In March, the Centers for Disease Control and Prevention reported a 14% increase in adults with symptoms of an anxiety or depressive disorder between August and February.
In addition to the pandemic, Americans have witnessed a rise in violence toward Asian-Americans and the death of more Black Americans at the hands of the police.
Despite the turmoil that has grasped the nation, the Illinois men’s golf team has remained consistent and is poised to compete for another championship. The Illini are currently ranked eighth in the nation, and they are the highest ranked team in the Big Ten by a significant margin, as there are no other conference teams in the top 25.
Their success has been a true team effort, and no single player has carried the burden. According to Feagles, it “speaks volumes about the depth of this team.”
“Coach mentioned to us a couple weeks ago all five of our guys are contending for golf tournaments,” Feagles said. “Might not be at the same time, but any given week, any of our guys are in contention to win, which is huge for a team.”
The team is strong because they can rely on each other in a sport that is, under most circumstances, individual. When one guy struggles, the rest of the team is consistent enough to stay in contention.
Feagles started the season with three straight top-five finishes, but he hasn’t been able to crack the top-10 in the last three events. Still, the Illini haven’t floundered.
They have yet to finish outside the top five in any event this season and, most recently, finished second at the Boilermaker Invitational, led by a fourth-place finish from junior Adrien Dumont de Chassart.
Dumont de Chassart has quietly put together a great junior season. Though he has yet to record a victory, he’s finished in the top 10 in all but one event this year.  He finished second, behind sophomore Jerry Ji in the Illini’s historic win at the Louisiana Classics and has led the Illini in two events this year.
Ji also has had success. In addition to his tournament win March 16, ninth-place finish at the Boilermaker Invitational was his third top 10 finish this year. He admits it hasn’t been easy.
“We’re in a bubble, and we can’t really see any other people than our golf team,” Ji said, “And it’s hard because I still have a lot of friends outside of the golf team, and not seeing them is not easy.”
It’s been over a year since the World Health Organization declared COVID-19 had reached pandemic status. During this time, many people have experienced isolation like Ji describes. Isolation is known to have a negative effect on mental health.
“What is good about us, or what we do really well, is that our team bonds really well,” Ji said, “Like when we need to do something fun with the team, we’ll go like a whole day just playing Spikeball or something, and it just keeps our mind kind of off the whole COVID-19 thing.”
Under most circumstances, golf is not a team sport. Players can’t pass the club when they lose confidence in their shot, and coaches can’t bring in a substitute when a player isn’t doing well.
But this team has been able to rely on each other, both on and off the course.
“If you put everything aside, we were so very lucky that we’re able to play this spring,” Ji said, “So, I’m not complaining about anything … We’re really lucky.”